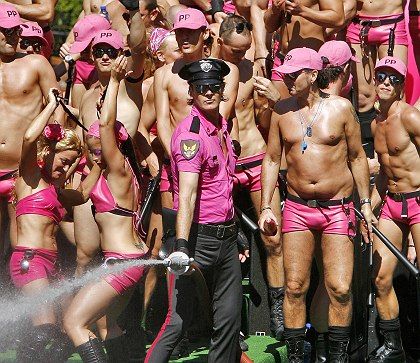 A gay parade in Amsterdam: homophobic attacks are on the rise in the Dutch city.

Amsterdam is considered one of the most gay-friendly cities in Europe -- and it has long flaunted it, with bars sporting provocative names like the "Cockring" snuggled comfortably within major tourist areas. Recently, though, gays and lesbians living in the city have begun to ask how safe they really are in one of the continent's greatest bastions of tolerance.

In 2006, the city registered 32 hate crimes directed at gays. During the first half of 2007, 26 had already been reported, including an attack perpetrated during the Dutch city's annual gay pride parade in August. The attack against a British gay couple generated headlines around the world in newspapers catering to the gay community.

This month, Mayor Job Cohen commissioned the University of Amsterdam to conduct a study on the motives behind the hate crimes. Half of the crimes were committed by men of Moroccan origin and researchers believe they felt stigmatized by society and responded by attacking people they felt were lower on the social ladder. Another working theory is that the attackers may be struggling with their own sexual identity.

Amsterdam is known the world over as a melting pot for people of every color and persuasion, but 20 percent of gays and lesbians responding to a recent poll said they had been discriminated against at least once in their life.