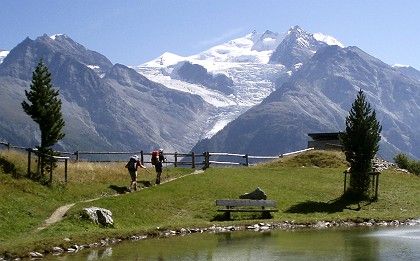 Switzerland, a country famed for its landscapes is quickly becoming the biggest producer of halal processed food.

Walter Leisi is holding two rolled cylinders of dough in his hands, each wrapped in glossy foil, one labeled in French and the other in Arabic. Each package contains the same puff pastry, a concoction of 196 layers of flour, margarine, butter, water and salt -- the same, but for one difference, a tiny but decisive difference: one is preserved with alcohol and the other with potassium sorbate.

They taste the same, but they smell somewhat different. The dough preserved with potassium sorbate smells "slightly more cheesy," says Walter Leisi, 63, a jolly Swiss man wearing a purple short-sleeved shirt and a gold watch. Leisi is the director of a Nestlé plant in the Swiss town of Wangen bei Olten. He is also the inventor of Leisi-Quick, the world's first ready-made puff pastry, which is packaged on baking paper and sold in refrigerated, but not frozen, form and is thus ready for baking. The factory produces more than 41,000 tons of freshly made dough a year, an enormous quantity.

But in the case of Leisi-Quick, the real issue is not taste or smell, but God's will.

More and more Muslims are choosing a devout lifestyle, and this includes strict observance of the dietary restrictions in the Koran, which classify food as being either "halal" or "haram," allowed or forbidden. Pork, blood and alcohol are haram. This sounds straightforward enough, but in an era of modern food production, observing these restrictions is anything but easy. Forbidden foods are hidden in products like bouillon, gelatin and spice mixtures. Many preservatives are made with alcohol, the glue used in packaging can contain animal fats and pig bristles can turn up in production equipment. The alcohol used in puff pastry is haram, and although it evaporates during baking, a small residue is left behind.

Many Islamic countries have strict rules requiring the use of halal food products, and they have even become a global trend in recent years. The current market is valued at an estimated €350 billion ($508 billion). Muslims make up one-fifth of the earth's population, and as their purchasing power grows, so does their religious self-confidence.

Islamic countries, especially Malaysia, are fueling the demand. It's now even possible to get mineral water and rice that is halal. Entire research institutes are dealing with the question of whether the additives E100, E407 and E418 are permitted for devout Muslims. Lipstick, medications and skin creams can also be haram. This is about religion, undoubtedly, but even more about business.

As a result, anything that is not halal could soon no longer be global. This explains why Nestlé, the world's largest food corporation, with €64.9 billion ($94 billion) in sales last year, now adheres to rules that date back to the 7th century in 75 of its 480 factories worldwide. The Swiss are the biggest producers of processed halal food, mainly for Southeast Asia and the Middle East, earning €2.4 billion ($3.5 billion) from sales of such products last year -- more than with organic food, the other, Western trend. To keep it that way, products are tested, certified and regularly inspected by "Islamologists" working with high-tech analysis equipment.

Even Europe is gradually adjusting, as the demand for halal products grows in the double-digit percentage range each year. Last year, when McDonald's opened its first European restaurant with halal burgers on the menu -- in London -- sales rose immediately. The British supermarket chains Tesco and Sainsbury's have installed separate halal shelving and are targeting Muslim customers in their advertising. And for the past two years Nestlé has eliminated pork, blood and alcohol from the production process in seven European factories, including a sausage plant in France, a Nescafé plant in Germany and a powdered milk plant in Spain.

Because Nestlé has discovered that puff pastry is a strong seller among Muslims, globalization has now reached Wangen bei Olten, a town of 4,983 inhabitants that recently fought a heated but ultimately unsuccessful battle against the construction of a mosque minaret. Walter Leisi, whose father began producing ready-made cake dough and puff pastry in 1938, and whose childhood bedroom was once next to the kneading machine, now writes terms like "Quality Monitoring Scheme" on a white board and has a certificate issue by the Muslim Institute of the Paris Mosque for "Pâte à tarte sans Alcool (halal)."

Much has changed since the invention of Leisi-Quick. The former family-owned business has since been sold to Nestlé, and the demand for puff pastry is no longer determined by the French plum harvest, but by Ramadan.

The company sells most of its puff pastry to France, the land of the quiche. If the halal version is successful, Nestlé plans to offer more halal products soon, including shortcrust pastry and pizza dough. "Nowadays," says Leisi, "this is part of having a well-rounded product line."

He puts on a white coat and a cap and begins a tour of the factory, past shiny chrome-plated kneading machines and conveyor belts traveling in every direction, 24 hours a day, carrying dough in various forms: flattened, in small mounds and rolled up.

Halal or not halal, the differences are not visible. The machines are the same. They have to be cleaned regularly with alcohol, which evaporates after 15 minutes. Then, in accordance with the Islamologist's instructions, another batch of halal puff pastry can be produced. "It's really quite simple," says Walter Leisi, and smiles.