The stakes for Athens are high. The Institute of International Finance is saying the deal on a 50 percent debt haircut for Greece may fail. Time is running out, and a number of key issues remain unresolved. The Greek Finance Ministry, for its part, insists that an agreement could be finalized by the end of next week.

Amid the confusion, however, one thing is clear: Should private investors not reach an agreement with Athens on debt reduction for Greece -- a step agreed to by European Union leaders at a summit last October -- the country and the entire euro zone face a disaster. An uncontrolled insolvency would be the result. In an effort to forestall that eventuality, euro-zone representatives met on Friday to discuss the debt reduction plans, parallel to the talks in Athens.

The hectic negotiations reveal that hopes have been dashed once again for an improved situation in Greece. This year things were supposed to be better. The Greek economy was supposed to slowly make its way toward recovery, with austerity measures taking hold and the debt mountain finally showing signs of shrinkage. But the only thing shrinking in Greece right now is hope. It now looks as though Greece, even on the long term, will be unable to free itself from its tremendous debts.

Indeed, experts have begun doubting whether a default can be avoided for much longer. The International Monetary Fund (IMF), a key player in previous bailout efforts, now has doubts as to whether current plans can in fact be realized. Skepticism is growing in Germany too.

"When it comes to Greece, it's clear that it's hopeless," said Hans-Werner Sinn, president of the Munich-based Ifo Institute. "It would be better for the country to finally leave the euro and transform its foreign debts to drachma, than to constantly beg for new aid and set itself up for lasting charity."

Most economists agree that an exit from the euro zone would go hand-in-hand with a default. "The two things go together," says Hano Beck, economics professor at Pforzheim University. He is convinced that an orderly insolvency is the best solution for Greece. "The country can't continue to be ruined by extreme austerity," Beck says, adding that it's cheaper to save a financial system than it is to save a country.

But how expensive would a Greek insolvency be for investors -- countries, banks and insurers -- and for the European Central Bank?

In May 2010, the European Union and the IMF agreed on a rescue package worth €110 billion, which was to be paid out in a series of tranches. Some €73 billion ($93 billion) has already flowed into Greece: €20 billion from the IMF and €53 billion from EU countries. Germany's portion of the amount paid so far amounts to some €15 billion.

The current conflict, however, centers on the planned second bailout package for Greece, worth €130 billion and agreed to in principle at an EU summit last October. Greece needs the first payment of this fund in March to avoid insolvency. Part of this package is the 50 percent debt haircut for Greece that is now under negotiation. It envisions Greece's private creditors -- primarily banks, insurance companies, investment funds and hedge funds -- voluntarily agreeing to the write downs. Together, they hold some €205 billion in Greek bonds.

Risks to the ECB

Creditors have already written off the lion's share of the losses from their balance sheets. German and French banks would thus likely be able to withstand a bankruptcy. It's mainly the Greek institutions that would face serious difficulties. They hold the largest portion of debt among private creditors -- some €50 billion worth -- though they too have already partially adjusted their value.

Much larger risks are facing the European Central Bank (ECB). Since May 2010, the ECB has purchased sovereign bonds from crisis-stricken euro-zone member states worth €213 billion. An estimated €55 billion of that are Greek bonds. Such widespread bond purchases have resulted in sharp critique from financial experts.

But the ECB is also carrying much higher risks. They stem from the collateral that banks must post when they borrow money from the ECB. Often, that collateral consists of sovereign bonds from the countries where the banks are located. As such, when Greek banks borrow from the ECB, they post Greek sovereign bonds as collateral. Increasingly, however, they are taking advantage of the ability to issue bonds themselves, which are then guaranteed by the Greek state. Those bonds too are accepted by the ECB as collateral.

In the last three-and-a-half years, financial institutions from debt-stricken euro-zone countries such as Greece, Portugal and Ireland have borrowed extensively from the ECB. Since the peak of the financial crisis in 2008, the ECB has provided euro-zone banks with unprecedented amounts of liquidity. In December, the ECB flooded European banks with additional capital with unusually long loan periods of three years -- an influx of fully €500 billion. The loans were processed by national central banks in the euro zone.

The ECB does not publicize official numbers regarding which bank borrowed money, nor do they make amounts public. But Greek banks currently have few options when it comes to accessing fresh liquidity. Other banks have simply stopped lending them money. And Greeks have likewise begun pulling their capital out of Greek banks to deposit it in more secure accounts abroad.

This phenomenon can be interpreted from so-called TARGET 2 payments. TARGET 2 -- an acronym for the second generation of the Trans-European Automated Real-time Gross Settlement Express Transfer System -- is a system which facilitates payments among national central banks in Europe. When a Greek bank borrows money from the Greek central bank, the central bank in turn must borrow the money from the ECB or from other national central banks that are part of the ECB system. Its balance then shows an account payable.

Until the beginning of the financial crisis in 2007, the accounts among European central banks were largely even. But in 2008, they began to drift apart significantly. Whereas Germany's Bundesbank, according to current numbers from the end of September 2011, is owed a total of €465 billion by other euro-zone central banks, states such as Ireland, Greece, Spain, Portugal and Italy have huge deficits. The Greek central bank, for example, owes other central banks €101 billion. "In the case of a national bankruptcy, the majority of that money will likely disappear," said economics professor Beck.

Thus, the ECB's total exposure to Greece is immense. Of course the two numbers -- the €55 billion worth of sovereign bonds and the €101 billion the Greek central bank owes to the European central banking system -- cannot be simply added together. Even if Greece enters insolvency, not all of that money would be gone. Furthermore, the ECB did not, as a rule, pay face value for the Greek sovereign bonds in its portfolio. But the losses would be enormous. In a worst-case scenario, euro-zone countries would have to inject fresh capital into the ECB to stabilize it. Treaties require Germany to pay a 27 percent share of such capital injections.

The economist Sinn considers this danger to still be "manageable." More difficult to assess is the danger of contagion to larger countries such as Spain and Italy. "Nobody can say how things would develop," Sinn says. "I'm not sure myself."

Still, he says, it would be better to have Greece withdraw from the monetary union than to continue to amass risks for the balance sheets of the ECB and for euro-zone national budgets. "The only choice we have remaining is that between taking a short-term risk and taking a longer-term risk," Sinn says. "The long-term one is immeasurably large." 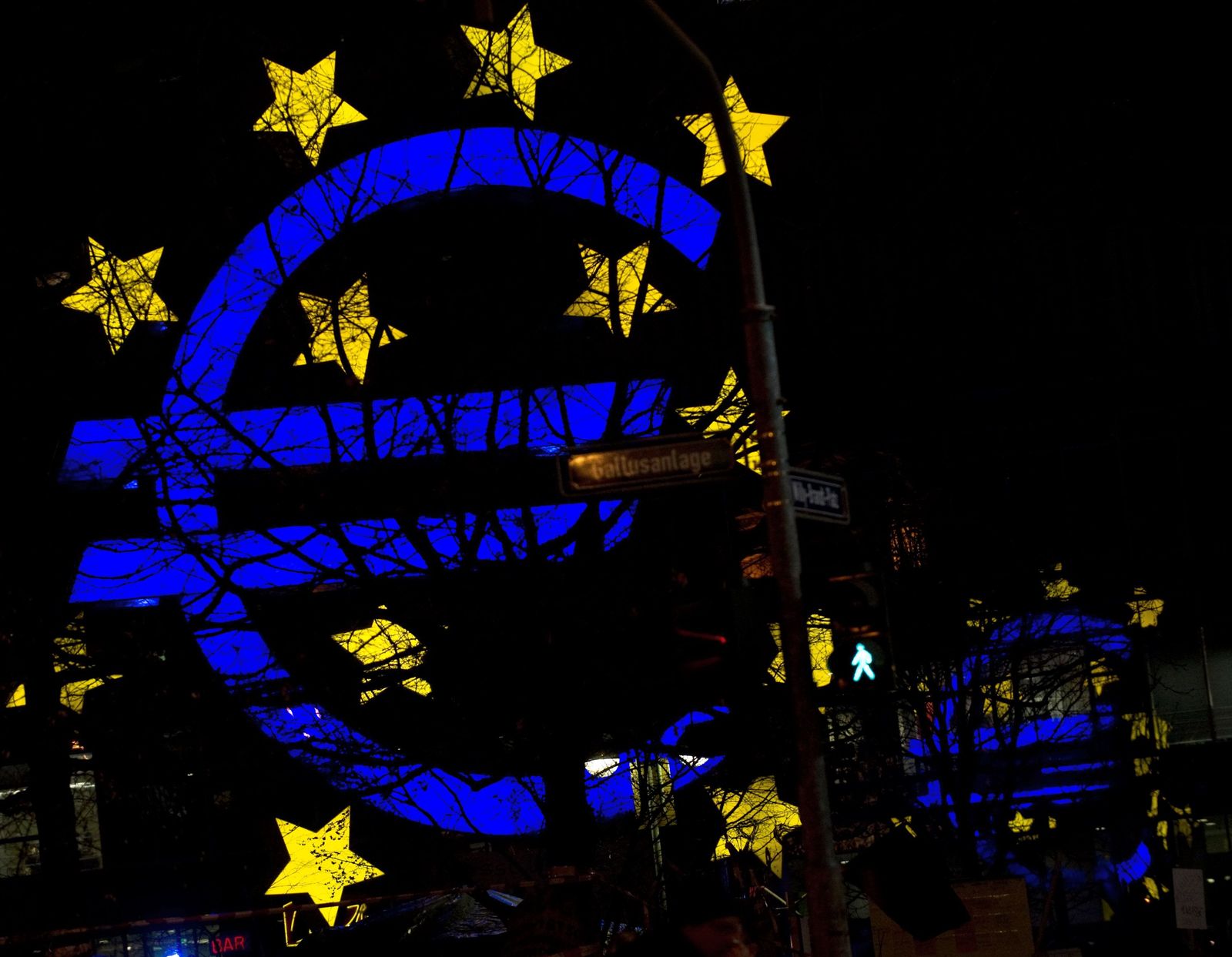 Concerns are growing once again about Greece.