The picture, a Balinese island landscape, is still leaning against the wall where it was a year ago. Back then, the European Financial Stability Facility (EFSF) had just recently been set up, and its chief executive officer, Germany's Klaus Regling, was too busy to hang the souvenir from Indonesia on the wall.

He is still just as busy today. Three European bailout packages later, it is clear that the EFSF and the European Stability Mechanism (ESM), which will succeed it in 2013, will have even more to do in the future. European heads of state and government recently decided to substantially upgrade both funds.

What is now taking shape at the EFSF's offices at 43, Avenue John F. Kennedy in Luxembourg City is the nucleus of a super-authority with which the 17 countries in the euro zone hope to save their currency. The amount of money it has at its disposal in the event of an emergency -- €440 billion ($634 billion) -- is three times as large as the entire European Union budget. The EFSF and the ESM will have a similarly important effect on the stability of the euro zone as the European Central Bank (ECB).

Birth of a European Monetary Fund

If German Chancellor Angela Merkel and French President Nicolas Sarkozy have their way, Regling's bailout fund will turn into a European Monetary Fund, which, like the International Monetary Fund (IMF), would monitor the financial and economic policies of its member states and, if necessary, come to their rescue with billions in bailout funds.

In some ways, the EFSF's powers go well beyond those of the IMF. The EFSF is supposed to be able to lend money to countries experiencing short-term liquidity problems and use its billions to stabilize tottering banks. The most important of the recent changes is that Regling will be able to intervene in the markets and buy up government bonds to stabilize their prices and yields.

Because the new tasks cannot be effectively addressed with the current workforce, Regling intends to double his staff from 12 to 24 employees in the course of the next year.

But he "does not see the need at this time to increase the financial framework of the EFSF," says the 60-year-old CEO. Even when Greece receives help from the fund as part of the second bailout which was agreed at the July 21 summit of euro-zone leaders, more than half of the approved €440 billion will still be left over, Regling says.

Nevertheless, when the EFSF takes over the ECB's task of buying up debt-stricken countries' sovereign bonds in the fall, it could quickly run up against its limits. But Regling shrugs off such concerns. He doesn't say it, but he knows that the finance ministers in the euro zone would beef up his funds if necessary. German Finance Minister Wolfgang Schäuble and his Dutch counterpart, Jan Kees de Jager, have already indicated their willingness to do so.

Regling believes that the bond purchases are a profitable business for the ECB, as they will also be for the EFSF later. The central bank, he says, buys the bonds at a discount. If it held the securities until maturity, it would receive their face value. "It keeps the difference as profit," he explains.

Of course, such demonstrative confidence is all part of Regling's job. In a sense, he is a global salesman for the euro. His goal is to make it clear to international investors that an investment in the common currency is worthwhile in the long term, because the member states, with his help, will do everything in their power to keep the euro.

At times, Regling exudes optimism to the point of excess. "The fundamentals are improving in all countries in the euro zone," he says. According to Regling, the currency zone is in a better position than the United States and Japan when it comes to government debt and budget deficits. "For example, the US deficit is three times as high as the deficit in the euro zone," he says. In addition, he points out, austerity plans have been approved for each country in the currency zone, something which the United States is a long way from doing.

Does it concern him that the financial markets are in turmoil because of the problems in Europe? Not really, it seems. Ireland, for example, has already overcome the worst, he says, adding that the country has regained a large part of its competitiveness. "The financial markets just need to properly recognize that."

With regard to the financial markets, Regling says, "the crisis confirms that markets sometimes act unpredictably and irrationally." Now that he is on the subject, the rescuer of the euro takes aim at his fellow Germans. "To a certain extent, hysteria reigns in Germany," says Regling. The Germans, in his view, believe that things can always get worse. "But that isn't true. The signs point toward improvement."

'The Currency Union Is Not Going to Break Apart'

Regling also views all the manic fear in Germany of a so-called transfer union as "nonsense." In the "only case of insolvency in the euro zone," namely Greece, only private-sector creditors -- and no public ones -- have been asked to contribute so far. "Only if Greece was expelled from the currency union, as some economists have demanded, would there be a high probability of transfer payments," he says. At that point, the country would no longer be able to pay back the loans it had taken out from its partner countries, which would continue being denominated in euros.

Indeed, Regling's long-term faith in the euro remains unshaken. "The currency union is not going to break apart, because strong and weak countries have a common interest in its survival." The economic price of its failure would be too high, he says. "The chances that the euro will be abandoned by anyone, no matter who, are practically zero."

The fact that things have already almost reached that point in the past doesn't change Regling's mind. A year ago, he predicted that "the most likely scenario" was that he and his EFSF would not actually have to intervene. The facility's very existence would be enough to calm the markets down, he argued at the time.

However, things turned out differently. Sometimes an optimist is nothing but a person who refuses to let themselves be discouraged by their own mistakes. Indeed, Regling believes that there is "good reason to hope that the crisis will be over in two to three years' time." The precondition for this, he adds, is that the euro-zone countries continue their austerity and reform plans and that the global economy doesn't collapse. 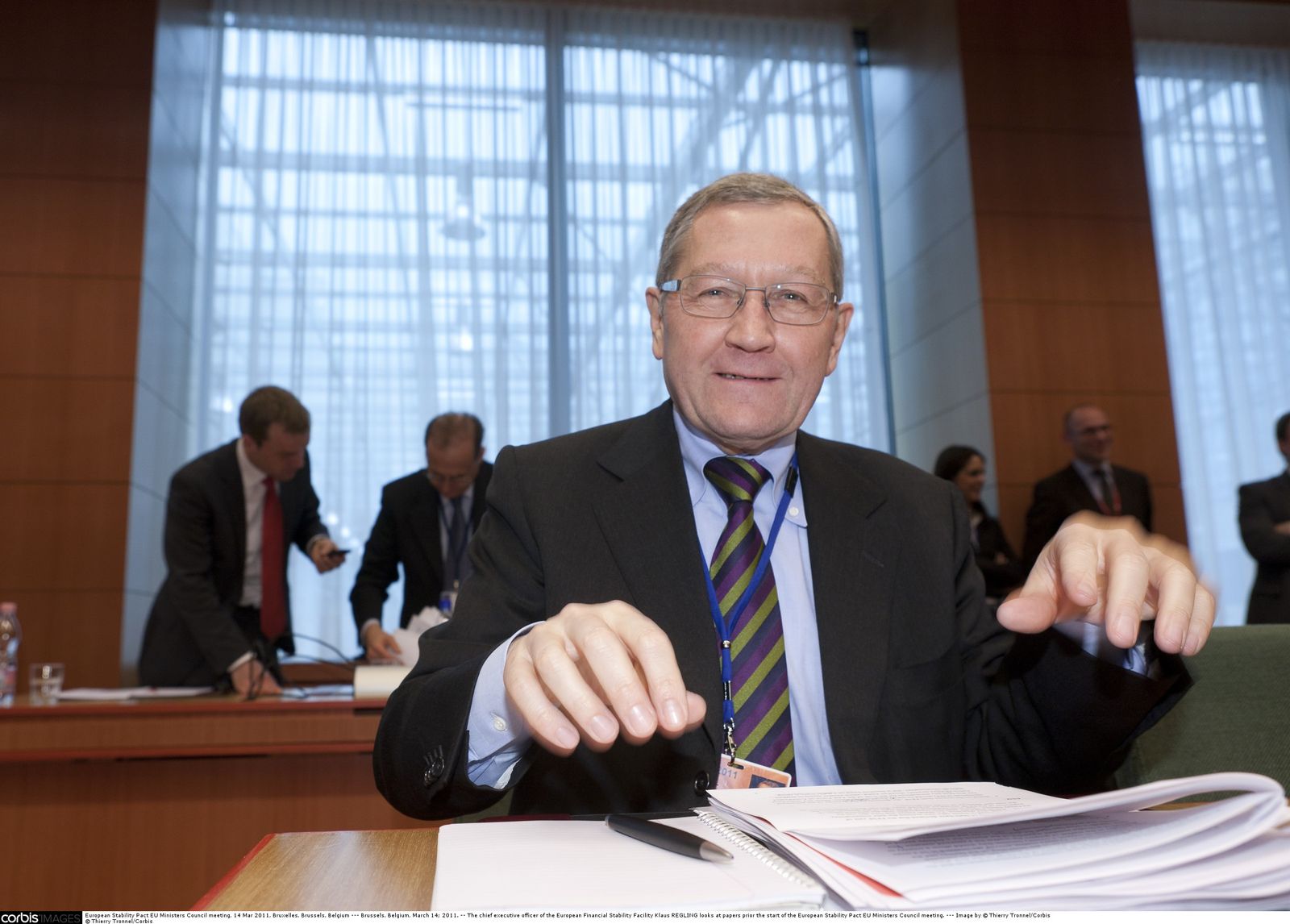 Klaus Regling, head of the European Financial Stability Fund, is more optimistic than most.