"Anything that can go wrong will go wrong." This piece of wisdom, known as Murphy's Law, currently applies extraordinarily well to economic policy in the euro zone.

On the one side there are the Greeks, who clearly still do not have their financial statistics under control and who produce one false report after another about the country's budget deficit. On the other side are the Germans, who delight in hindering a rapid and unambiguous European response to the Greek crisis -- in the process driving the cost of a solution through the roof.

At the same time, it is striking just how many representatives of the parties in Germany's coalition government are giving advice to the Greeks, ranging from drastic pay cuts to an immediate declaration of insolvency right up to a swift withdrawal from the euro zone. These observers base their verbal radicalism on the noble economic argument that Greece needs to be made "fit for the financial markets" once again. Another, less sophisticated, argument goes that the vast majority of Germans are unwilling, after years of limiting their own consumption, to make financial sacrifices to help out Greece.

Both Greece's calculation errors and the diva-like reluctance of the German government to help Athens are nothing more than an invitation to speculators to bet on the demise of the southern European country. This also explains why risk premiums on Greek government bonds have shot up to previously unimagined heights in recent days. The Greek government must now pay such high interest rates to refinance its debts that it can no longer get by without foreign assistance, despite recent tax increases and massive wage cuts.

The Role of the Rating Agencies

In the process, and as a result of the active assistance of the German government, what has happened is exactly the thing that was supposed to be avoided, and what could have been avoided -- namely that Greece has indeed been forced to ask for financial help from other European countries.

The problem for the German government is that its arguments are not tenable. That applies first of all to the reference to the financial markets, an argument that is delivered in a tone of utter conviction that the risk premiums seen there accurately represent real risks. It is remarkable that, after all that has happened in the last couple of years, experienced politicians still assume that financial markets produce rational and reliable information.

It is a fact that speculators have access to no more information about Greece than the economic experts in Europe's governments. There are, however, many market players such as hedge funds which derive profits from uncertain events. The more chaotic things are, the more they like it. Their biggest enemy is political clarity, which is why they are delighted when politicians indulge in scaremongering. In the case of Greece, this scaremongering has succeeded extremely well, as the skyrocketing risk premiums show.

The role of rating agencies can also not be forgotten. It was their downgrading of Greece's creditworthiness that triggered waves of speculation. This is partly because the rating agencies, according to current regulations and despite their total failure during the financial crisis, still have a lot of power over the markets -- power that was given to them by politicians. Every downgrading of Greece's status forces banks to sell Greek government bonds. This in turn accelerates the decline in the value of those bonds, leading to even higher interest rates.

The populist argument that the majority of the populace is opposed to financial backing for Greece, is also attributable to the German government -- because Chancellor Angela Merkel, of all people, blocked the only successful path that would have prevented having to pay out billions in aid.

The path would have looked like this: Early on -- in other words, weeks ago -- the EU should have explained credibly and clearly that it would take a shared common responsibility for an equal member of the common internal market. That would have included the readiness, under certain conditions and in an emergency, to guarantee payments to Greece.

That declaration would have made speculation a lot more difficult, and it also could have prevented the associated dramatic collapse of the value of Greek bonds. It also would have increased the chances that Greece could rescue itself on its own. And that would have saved German taxpayers a lot of money. Credibility and clarity pay dividends.

That, unfortunately, is not the situation we have now. The German government's submissiveness to the financial markets and its cowardice towards the tabloid press (the mass circulation daily Bild, for example, wrote in a headline: "You Greeks Aren't Getting a Thing from Us") could get very expensive for taxpayers. Now the aid will actually have to be paid out. And the fuss the German government continues to make won't change a thing.

The only thing that has been achieved is that the speculators are getting even more encouragement to act. In the worst-case scenario, other countries like Spain, Portugal, Ireland and Italy will sink into the downward spiral of speculation. That would be the end of the monetary union -- and another fine example of Murphy's Law. 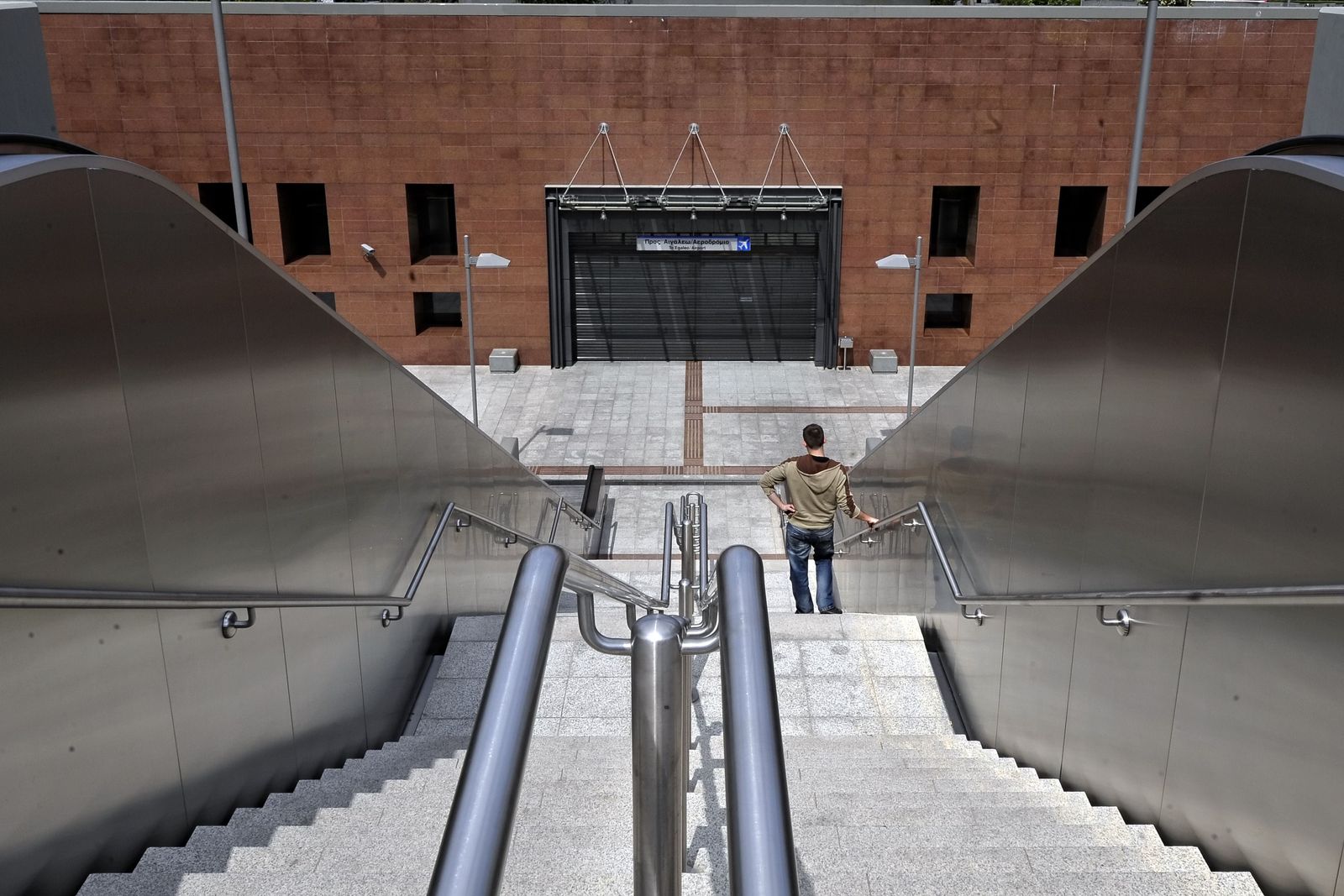 A metro station in Athens is closed Tuesday as public transport employees strike: Greece can no longer get by without foreign assistance.