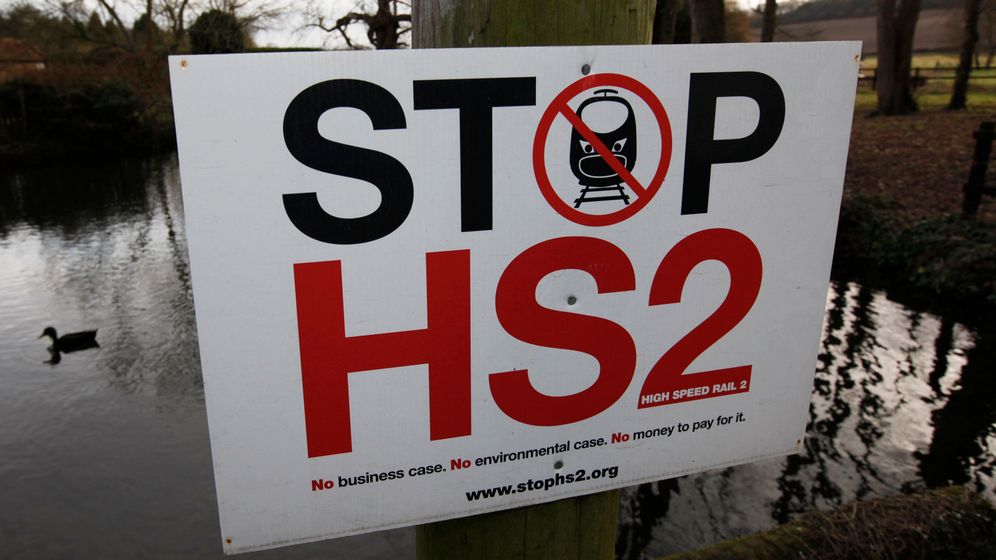 The British government has long been consistent in its support: The planned high-speed rail link between London and the north of England is as revolutionary as the invention of the steam train in the 19th century, intoned former secretary of state for transport Philip Hammond, who is now defense secretary, in October of 2010. It will create jobs and improve the competitiveness of Britain's economy, the government has promised.

But there has been no lack of opposition to the £32 billion (€38.8 billion, $49 billion) prestige project. Indeed, it has taken two years and countless consultations before cabinet approval could finally be granted for the first, 180-kilometer stretch connecting London and Birmingham. Current Transport Secretary Justine Greening gave the green light earlier this week.

Now the planning can finally begin. The goal is to cut travel time between the two large cities by half an hour, to just 50 minutes, by 2026. The new trains are to travel at speeds of up to 360 kilometers per hour (223 mph). A second construction phase would then extend the connection to Manchester, Liverpool and Leeds, making it possible for passengers to reach northern England in just an hour and a half.

High-speed train travel, of course, has been a staple on the Continent for decades. Germany's ICE trains and France's TGV zip between major cities and travel hundreds of routes each day. Except for trips between the far north of Germany to Munich or Stuttgart in the south, for years the train has been the quickest way to go.

Britain, for its part, has made due with a single high-speed line -- used for the Eurostar, which connects London with the rest of Europe, and for domestic service introduced in 2009 by British private rail firm Southeastern. The new project, called High Speed Rail 2 (HS2) will finally propel the UK into the age of high-speed rail.

Originally put into motion by the Labour government two years ago, the vision is ambitious. Ultimately, Britain is to be completely integrated into Europe's high-speed rail network. In 20 years, travel times between Paris and Manchester are planned to drop to a mere three and a half hours. A connection to London's Heathrow airport is also being planned.

Many are excited about the project, with both unions and business associations welcoming the government's decision. "This is a fantastic day for the West Midlands," Jerry Blackett, head of the Birmingham Chamber of Commerce Group, told the daily Birmingham Mail. "However, the imperative is to press ahead with all speed because delay will simply stall the impetus that today's announcement has given."

His hopes, however, are not likely to be fulfilled. The project is supported by all three large parties in the House of Commons. But outside the parliament, there are plenty of opponents, and their numbers have grown consistently in recent years. Both residents who live close to the planned route and environmentalists have become vocal in their hostility to the plan, and aren't likely to back down.

Indeed, demonstrations have become regular events in the villages along the planned HS2 route. The opposition group Countryside Alliance is concerned that the project will destroy the idyllic, rolling landscape. Hunters are worried about their centuries-old hunting grounds and local representatives, most of them Conservatives, fear the anger of their voters.

The government of Prime Minister David Cameron, a Conservative himself, has done its best to rob opponents of momentum by, for example, promising the Chiltern Hills area additional tunnels to avoid destroying the landscape. But the Conservative Party's grassroots love their hedgerows, rolling fields and drystone walls. Modern intruders such as wind turbines and speeding trains are most assuredly unwelcome.

"The countryside is a precious thing," Christopher Hodgson, who resides in an area through which the train will run, told Spectator magazine. "Once you destroy it, you cannot get it back."

But its not just concern about the landscape that has opponents fired up. There is also widespread doubt over government claims regarding the benefits of high-speed rail. Does a 30 minute reduction in travel time really benefit passengers? After all, the new trains will not roll into Birmingham's main station, but will terminate at a purpose built station at the edge of the city. Time saved on the trip would, for many passengers, be spent on getting into the center of town. Those wanting to change trains to a regional line would almost certainly prefer to travel with a conventional train to the main station.

Many critics see the project as nothing more than a waste of money -- merely a bit of pork pushed through by politicians wishing to make a name for themselves. They say that the billions allocated for the project would be better spent on local tram lines. The city of Leeds, population 500,000, has no local transport system aside from buses, for example. Critics say that for residents, improved connections to the city center are more important than a high-speed rail link with Paris.

Will It Ultimately Be Scrapped?

Adding to the problems, conventional train traffic would likely suffer as a result of the new super-trains because they are to travel at least in part on the same tracks. There are already fast trains that require just two hours to travel from London to Manchester. In order to make room for the new, high-speed trains on tracks and at train stations, they would travel less frequently.

Greening's Tuesday announcement did little to counter these concerns and opponents remain focused on halting the project. Several communities have said they will mount legal challenges. Meanwhile, the government says it will only introduce a bill providing the legal framework to the project to parliament in 2013. Until then, lobbying is likely to be intense. Jerry Marshall, chairman of the Action Groups Against High Speed Two (AGHAST), believes that the project will ultimately be buried.

HS2 opponents are encouraged by the fate of the third runway which had been planned for Heathrow. The former Labour government wanted to push that project through at all costs, arguing that the future of the country was at stake. Once the Conservative government under Prime Minister David Cameron took over in 2010, however, the runway idea was shelved immediately. It cannot be ruled out that the high-speed rail network will meet the same fate a few years from now.