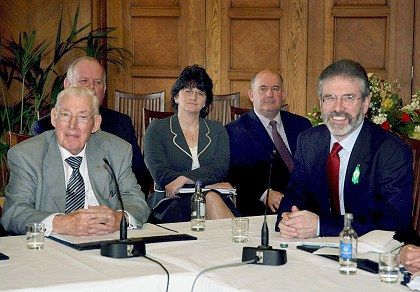 Ian Paisley (l) and Gerry Adams (r) met Monday for historic talks. It was the first time the two men had ever spoken to each other.

Ian Paisley meeting Gerry Adams? It was an event of lion-laying-down-with-lamb proportions, as Paisley, a Protestant minister with a taste for fiery Biblical rhetoric, might describe it -- even though each side would doubtlessly argue over who was the lion and who was the lamb.

The meeting was certainly a historic breakthrough for Northern Ireland. Arch-rivals Paisley and Adams have long been icons of the Protestant and Catholic sides respectively in the long and bitter struggle over who should rule Northern Ireland. Paisley is the leader of the Democratic Unionist Party (DUP), which wants to keep Northern Ireland's ties to Britain, while Adams is president of Sinn Fein, whose ultimate goal is a united Ireland.

The two men held their first ever face-to-face meeting Monday in the Northern Ireland Assembly buildings in Stormont, Belfast. However the two arch-rivals did not shake hands, according to officials from both sides.

Afterwards they announced a deal to forge a power-sharing administration by May 8, which will lead to a new era of home rule for the province.

"After a long and difficult time in our province, I believe that enormous opportunities lie ahead for our province," commented Paisley, 80, who had previously refused to negotiate directly with Adams or Sinn Fein. "We must not allow our justified loathing of the horrors and tragedies of the past to become a barrier to creating a better and more stable future for our children."

Adams, 58, said Monday's deal "marks the beginning of a new era of politics on this island." Both leaders said they and their deputies would immediately start work on negotiating a joint platform for government. "There is important preparatory work to be carried out so that ministers can hit the ground running," Paisley commented. 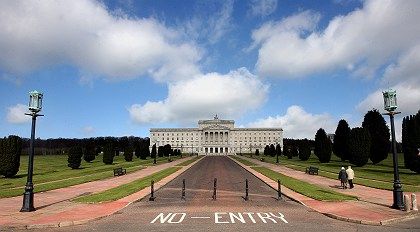 Paisley and Adams' meeting could pave the way for home rule by Northern Ireland's Assembly, which is based in the Parliament Buildings in Stormont, Belfast.

"Everything we have done over the last 10 years has been a preparation for this moment," British Prime Minister Tony Blair said in a statement. He called the two leaders' meeting "a remarkable coming together."

The British government had been putting pressure on the two men to meet and hold discussions over power-sharing. The UK had set a deadline of midnight on Monday for the two leaders to strike a power-sharing deal and form a fully functioning administration which would run the province's day-to-day affairs. The deadline was regarded as the UK giving the two hardline factions one last chance to settle their differences and hammer out an agreement.

Britain's Northern Ireland Secretary, Peter Hain, Sunday signed a restoration order summoning the 108 members of the currently suspended Northern Ireland Assembly to meet Monday and nominate a new government. Elections were held to the Assembly on March 7. The DUP and Sinn Fein are the largest two parties in the current Assembly, with 36 and 28 seats respectively. However Hain had said he would order the Assembly to be dissolved at midnight if Paisley and Adams failed to meet.

Although the two sides will technically not meet the deadline, the UK is pleased enough with progress that it is prepared to be flexible. An emergency bill is to be rushed through both houses of the British parliament by Tuesday so that the Assembly can keep operating until the new May 8 deadline.

Britain had warned that the two sides needed to reach agreement on running the province on Monday or accept indefinite rule from London. The UK would also then have negotiated with the Republic of Ireland's government to give it a greater say in Northern Ireland's affairs -- something the DUP didn't want.

Northern Ireland was ravaged by three decades of near-civil war between Protestants and Catholics known as "The Troubles" which left around 3,600 people dead. The violence largely ceased with an American-brokered 1998 peace accord known as the "Good Friday Agreement" which set up an assembly in Northern Ireland. However that assembly was suspended in 2002 after the ruling coalitions collapsed amid allegations that an IRA spy ring was active in the building. In 2005, the IRA pledged to disarm and use only peaceful means to pursue its goal of a united Ireland.

Commentators have suggested that UK Prime Minister Tony Blair, due to stand down this year, is keen to see an agreement in Northern Ireland to secure his place in the history books.