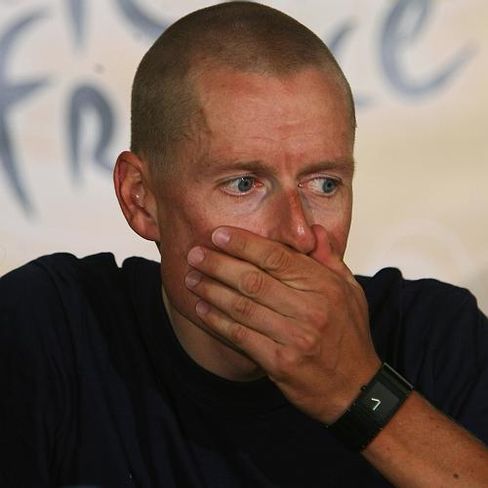 Facing the music: Rasmussen struggled to explain himself to reporters the day before he was fired for lying to his team.

True, Wednesday started as well as any day at this year's hexed Tour could. Eight German and French teams staged a symbolic "get clean" sit-down strike against doping in cycling before the stage began. Bombs set off along the tour route by the Basque separatist group ETA detonated almost unnoticed, and the riders set a hard pace on the most strenuous day of the Tour so far.

But by late that night, the 104-year old race -- already at its lowest point in living memory -- had been brought even lower. A police car followed former Italian national champion Cristian Moreni up the mountain climb to the finish line. He was taken into custody when he got off his bike and later in the day admitted to illegally using testosterone. Ironically, Moreni had been one of the riders at the morning anti-doping sit-in. His team's sponsor, the French bank Cofidis, responded by pulling their whole team out of the Tour.

And then things got even worse. Amid police raids and a hasty parking lot press conference at the stage finish in Gourette in the French Pyrenees, the Tour was rocked by the unprecedented withdrawal of race leader Michael Rasmussen, who was on track to win Sunday in Paris.

For days, Rasmussen had been dodging questions about why he missed several out-of-competition drug tests in the months before the race. Last week the Danish cycling federation announced that he would not be allowed to compete in the national championships or be eligible to represent the country at the Olympics next year because of the missed tests. Fans had taken to booing the skinny rider -- nicknamed "Chicken" since his days as a mountain bike world champion -- as he sped up the slopes of the Pyrenees.

On Wednesday an Italian TV commentator reported seeing Rasmussen training in the Italian Dolomites last month -- and not in Mexico, as Rasmussen had claimed for weeks. The revelation was the last straw. Presented with the new evidence, Rabobank management finally took action. "When Rasmussen was confronted with this information he confirmed to (team manager) Theo de Rooy he was at that moment in Italy," Rabobank spokesman Jacob Bergsma said Wednesday. "That was the reason De Rooy decided to get him out of the Tour and the team." Rabobank team managers fired him and pulled him out of the race.

The news came hard on the heels of another doping disaster. On Tuesday, Kazakh rider Alexander Vinokourov tested positive for blood doping. Vinokourov had won the hearts of many German fans with his new Astana team, which despite its Kazakh sponsorship was heavy with German stars. After his positive test for transfused blood, his entire team withdrew from the competition. Vinokourov has maintained his innocence, and a second sample of blood will be tested in the next few days.

In the meantime the impact on German stars has been massive. Astana rider and former German national champion Andreas Kloeden was sitting in the top five until the team quit the race in disgrace. "Now I am sitting at home and have to watch the rest of the Tour on TV and I don't understand the world any more,' Kloeden wrote on his Web site yesterday. "With one blow, all of my work and preparations this season are for nothing." Another former German national champion, T-Mobile's Patrik Sinkewitz, had been fired in the Tour's first week after a positive doping test.

The non-stop scandals have brought the sport perilously close to a breaking point. German government officials are considering pulling public funding from the World Championships, scheduled for Stuttgart in September. And on Wednesday, AFP quoted an anonymous source within the International Olympic Committee who said cycling may be cut from the Olympic program until it cleans up its act.

"Cycling is now a serious point of concern among IOC members. There is scandal after scandal and it is in serious danger of exiting the Olympics," the official said. "Cycling is dreadful for the image of the Olympic movement and the Games itself." The International Olympic Committee has also opened an investigation into Jan Ullrich's 2000 gold medal, and is considering stripping it from the disgraced German star.

Tour organizers have remained committed to keeping the race going. "We have started a war against doping and unfortunately in wars there are losses," Tour organizer Patrice Clerc told reporters. "But it is out of the question to stop, we must go on."

They may be in it alone quite soon. Sponsors are increasingly reluctant to stick with teams embroiled in doping scandals, and a number of German teams including Gerolsteiner and T-Mobile have indicated they may end their sponsorships when this terrible Tour is through.

A few sponsors are taking a different tack, suing teams with doped riders for missed publicity. "Instead of the journalists coming to see us, they all went to write about the positive dope test. Again today the papers are full of images and stories on Astana," Predictor-Lotto team spokesman Filip Demyttenaere told Belgian television reporters. The team, whose rider Cadel Evans is now in second place, is suing Vinokourov's Astana squad for €10 million worth of lost TV time. "We have missed a lot of publicity because of this, and that is worth a lot of money," Demyttenaere said.

With Rasmussen out, the race lead now falls to 24-year-old Spaniard Alberto Contador, who rides for the American Discovery Channel team. His American teammate, Levi Leipheimer moves up to third place overall. But there's no joy in this kind of win -- and Tour organizers announced this morning that Contador wouldn't wear the yellow jersey at this morning's start in Castelsarrasin, France.

"Obviously, this is not good news. We are in no way celebrating. It's a major disappointment for us. It's going to reflect very negatively on the whole sport," team spokesman P.J. Rabice told Velonews.com last night. "Riders were just getting to bed when they heard the news. They have all heard the news now, and not one of them had a smile on their face."