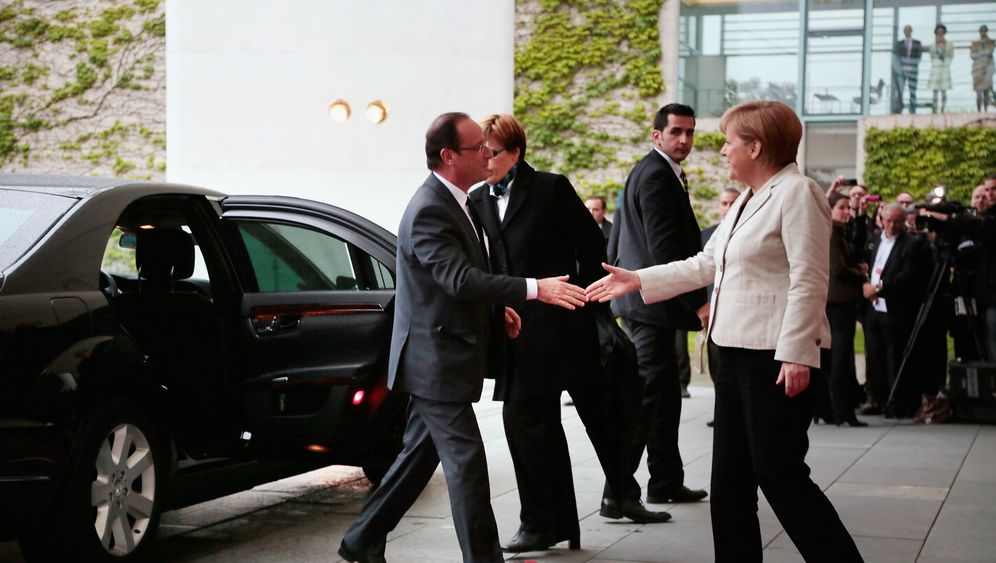 Photo Gallery: A Handshake Instead of a Kiss

For a brief moment, it almost looked as if the meeting in Berlin wouldn't happen. The weather gods seemed to have it in for the new French president on Tuesday. Immediately following his swearing in, François Hollande was soaked through by a heavy shower as he stood at the Arc de Triomphe. Then, on his way to the German capital not long later, his plane was struck by lightning, forcing the pilot to turn around.

Hollande transferred to a second plane and made it to Berlin in the early evening, only to be dampened by yet another shower as Chancellor Angela Merkel welcomed him with military honors at the Chancellery.

In the end, though, symbolism trumped the weather. Hollande's choice to fly to Berlin just hours after he was sworn in as Nicolas Sarkozy's successor in the Élysée Palace was nothing short of a statement: Good relations between the two largest countries in the European Union are vital. The importance of the meeting could be measured by the swarms of journalists who found their way to the Chancellery on Tuesday evening -- only visits by US presidents tend to draw more attention. Each gesture was closely watched: Merkel welcomed Hollande with a handshake instead of the kisses she reserved for Sarkozy. But it is still early in the relationship.

Tuesday evening in Berlin was not focused on making decisions. It was about psychology, about atmosphere -- and about initial efforts to determine exactly where France now stands on the vital issues facing the EU. Merkel and Hollande met for more than an hour before sitting down to dinner. They communicated via interpreters, both preferring to stick to their native tongues and only making brief forays into English.

Mostly, though, Tuesday evening was a pageant, designed to prove to the gathered journalists that the two leaders could get along. During the campaign, Merkel had left no doubts that she stood firmly behind Sarkozy, even offering to help him campaign against the Socialist Hollande. Sarkozy, however, fell to Hollande in the final round of voting by a tally of 48.3 percent to 51.7 percent. Merkel and Hollande -- both 57 and similar in height -- have little choice but to get along. The German chancellor insisted that she is approaching the cooperation "with pleasure and excitement." Both insisted that they are aware "of the responsibility we have for Europe."

The primary focus of their relationship initially will be Merkel's fiscal pact and her focus on austerity as a solution to the ongoing euro crisis. Given the beating Merkel's Christian Democrats took in state elections in North Rhine-Westphalia on Sunday, the French media was convinced that the German leader would have no choice but to back down. Given the approaching general elections in Germany in 2013, the Strasbourg paper Les Dernières Nouvelles d'Alsace wrote, it is possible that "she will retreat somewhat from her austerity policies."

Whether she will indeed take a step back remains to be seen. Twenty-five of the 27 EU member states have signed the fiscal pact and the national parliaments of all signatory states are to ratify the treaty by the end of the year. Hollande, however, has repeatedly threatened to recommend that the French parliament withhold ratification should the pact not be supplemented with a growth initiative.

Berlin has long since resigned itself to the need for such an amendment -- growth has become the European Union's newest favorite empty phrase. Merkel hinted as much at the Tuesday evening press conference, saying that it is but a general term: "The question is who has what ideas?"

That, in fact, is the decisive question. Hollande said that the pair had reached an understanding to put all ideas and proposals for growth on the table and to discuss which legal possibilities existed to make them reality. At the same time, he insisted that he was not interested in renegotiating the fiscal pact, as he had threatened to demand during the campaign. He merely wants to add a growth dimension, he said.

Still, Hollande wasn't completely a model guest. He once again mentioned his support for bundling European debt in so-called euro bonds, a proposal to which Merkel and her coalition partners, the Free Democrats (FDP), are adamantly opposed. He also said that without growth, sovereign debt cannot be paid down -- a seemingly banal sentence that could, however, be understood as a critique of Merkel's obsessive focus on fiscal responsibility.

The two sides will have to work quickly to find agreement on the way forward. Merkel said that Paris and Berlin hope to be able to present joint proposals for growth stimulus at the European Union summit at the end of June. "It will be very important," she said, "that Germany and France present shared ideas at that time."

'I Seldom Have Fear'

Finding agreement on those ideas will be the first test of the new Paris-Berlin relationship. After all, Hollande would like to avoid disappointing his followers in the very first weeks of his presidency. He has made many promises, including increasing state investment and reducing youth unemployment -- both of which could contravene the imperatives of Merkel's fiscal pact.

And Merkel too cannot be seen to give too much ground. Should she back away from her commitment to austerity, it could hurt her standing within her party. The FDP would also be opposed to any such retreat.

On Tuesday evening, such potential pitfalls were hidden behind the curtain of politesse. Toward the end of the press conference, Merkel was asked if she were afraid of the campaign promises made by Hollande in recent months, such as his pledge to sink the retirement age. Merkel answered: "I seldom have fear, as fear is not a good adviser in politics."

23 Bilder Photo Gallery: A Handshake Instead of a Kiss 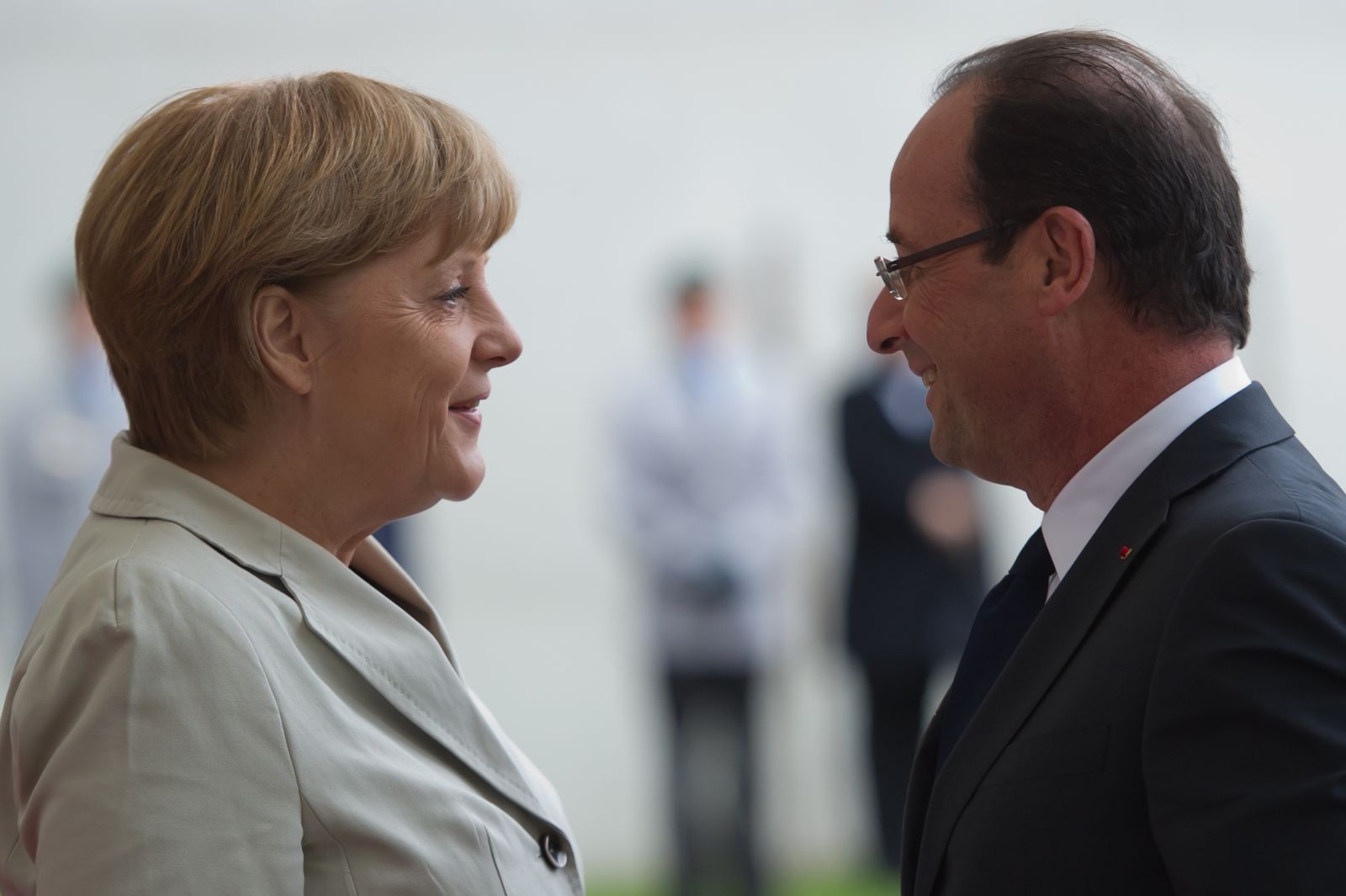 Some observers have suggested that, despite their political differences, Merkel and Hollande may have more compatible personalities and may be able to work together even better than Merkel did with Nicolas Sarkozy.