The whole ghastly process is now set in motion. Not just for Chancellor Angela Merkel, but also for anyone who still had a modicum of hope that the worst of Europe's debt crisis had already been overcome.

The opinion pollsters were right -- François Hollande won the first round of the French presidential election last Sunday. According to all the polls, he will also win the runoff vote on May 6. If he wins, he would become the second Socialist president of the Fifth Republic, following in the footsteps of François Mitterrand.

For France's neighbors and the fight against the sovereign debt crisis in Europe, that will set everything back to square one. Hollande has said that if he's elected, he will seek to renegotiate parts of the already painstakingly negotiated European fiscal pact. He has disparagingly called it the "Merkel-Sarkozy" pact and says he wants to renegotiate it or block it if necessary. He is demanding that "austerity policies be complemented by growth." And while he's at it, he also wants to change the statutes of the European Central Bank so that it would also be given the official duty of facilitating growth.

One might argue that the calendar is about to be set back 40 years and that we are landing right back in the 1970s, in an era when economic policymakers had been infected by the ideas of John Maynard Keynes, and believed they could bridge economic downturns with ever more multi-million programs financed with debt. It was precisely this phase of recent economic history in which governments began to declare it as their right to accrue ever more debt, and it also laid the foundation stone for the policy of racking up debts that is now standard in all industrialized nations.

"The people of Europe expect that we, the people of France, will provide Europe with another perspective, another direction, another orientation," Hollande recently told his supporters. But what orientation will that be? It certain won't be one that leads to less debt and to living within one's means.

Of course it would be desirable to have greater growth, which would also help overcome national deficits that have gotten out of hand. But it would be even better if this happened through natural means -- through innovation and increased investment in the real economy. But that's not what politicians like Hollande -- and his friends here in Germany and in other European countries -- is talking about when he calls for more growth.

What he's talking about is artificially created demand: growth paid for with ever more borrowing. It's about building motorways through sparsely populated stretches of land, the construction of more trade fair halls where they aren't needed and building provincial airports that are totally unnecessary.

To see how such growth is to be conjured up, one need only look at the potential future French leader's political platforms. His miracle weapon is called "euro bonds," securities that would be jointly issued by the Europeans and that Germany would also be liable for. But there is no logic whatsoever behind this call, because Hollande is also aware that France now only enjoys limited creditworthiness on the financial markets.

To perfectly round out the whole plan, the European Central Bank (ECB) is also now expected to do its part in a cheerful new round of borrowing. According to the current statutes governing the ECB, the central bank's sole duty is to ensure price stability. But for some time now, this mandate has been "extended to the extreme," argues Jürgen Stark, the ECB's former chief economist and a member of its executive board. The ECB has spent way over €200 billion buying up government bonds and it recently flooded the market with €1 trillion in cheap central bank money. And now, if Hollande has his way, the ECB will also be held responsible for growth through a change in its statutes. In other words: It will be obliged to carry out even greater credit financing.

Has Hollande Learned Nothing from Past Crises?

This melange of messages suggests that the expected new president of France, which is Germany's most important partner in the euro zone, hasn't learned a thing from the frequent crises that have emerged over the past 15 years. They were all fuelled by distortions that had been created through excessive borrowing -- by both private households and governments. But if politicians like Hollande have their way, the party will just keep going. Under their vision, growth is supposed to supplant urgently needed reforms -- a French pension system that allows 60-year-olds who are still capable of working to retire, a vastly oversized French state apparatus and a French labor market that is saddled with high wages and short working hours that is causing the country to become less and less competitive internationally.

But perhaps these fears are exaggerated. Perhaps Hollande will quickly learn the harsh, raw reality that campaign rhetoric and European reality aren't the same thing.

The new man in the Élysée Palace may fare the same as Mitterrand once did. When France's first Socialist president came into office in 1981, he brought with him a classic leftist agenda: higher minimum wages, more generous pensions, a shorter working week and also a wave of nationalizing businesses. Two years after Mitterrand took office, France slid into a state of economic disaster. The president was forced to abandon his socialist utopia and subject the country to a bitter course of austerity.

It probably wouldn't even take two years before Hollande arrives at a similar juncture. As long as German Chancellor Angela Merkel sticks with her "no" to euro bonds and to changes to the ECB's statutes, the Socialist president would fail based on a lack of funds alone. He simply wouldn't be able to obtain the money needed for his political adventure -- at least not at relatively acceptable conditions.

So what about the Germans -- in other words, Merkel and her government? Would she risk serious discord with the French by confronting her new French partner with an unequivocal "non"? When it comes to the European Union, governments have a tradition of solving their conflicts through compromise. But it is precisely that kind of compromise that could come with a huge price tag for Germany.

That also applies to the desire to weaken the European Central Bank's statutes. It would permanently lay to waste the German line that the central bank cannot be abused to finance government spending. That is even truer of the call for the fiscal pact to be renegotiated and to give the go-ahead for euro bonds. With the collectivization of new loans, the cost of Germany's debt servicing would rise by billions of euros. It would also eliminate the necessary pressure on Europe's most heavily indebted states to implement austerity measures. Ultimately, the fiscal pact creates the necessary preconditions for solving the debt crisis in the longer term and builds a solid foundation for the common currency.

For some time now, Germany has shouldered more burdens for the countries of the euro zone than it can actually carry. Even today, the liability risks entailed by the bailout programs that have already been provided threaten Germany's future viability, in the event that those countries are unable to service their debts and Berlin's guarantees turn into actual payments.

Merkel will have no choice but to show François Hollande the limits of what she is willing to accept. It's going to be a hot summer. 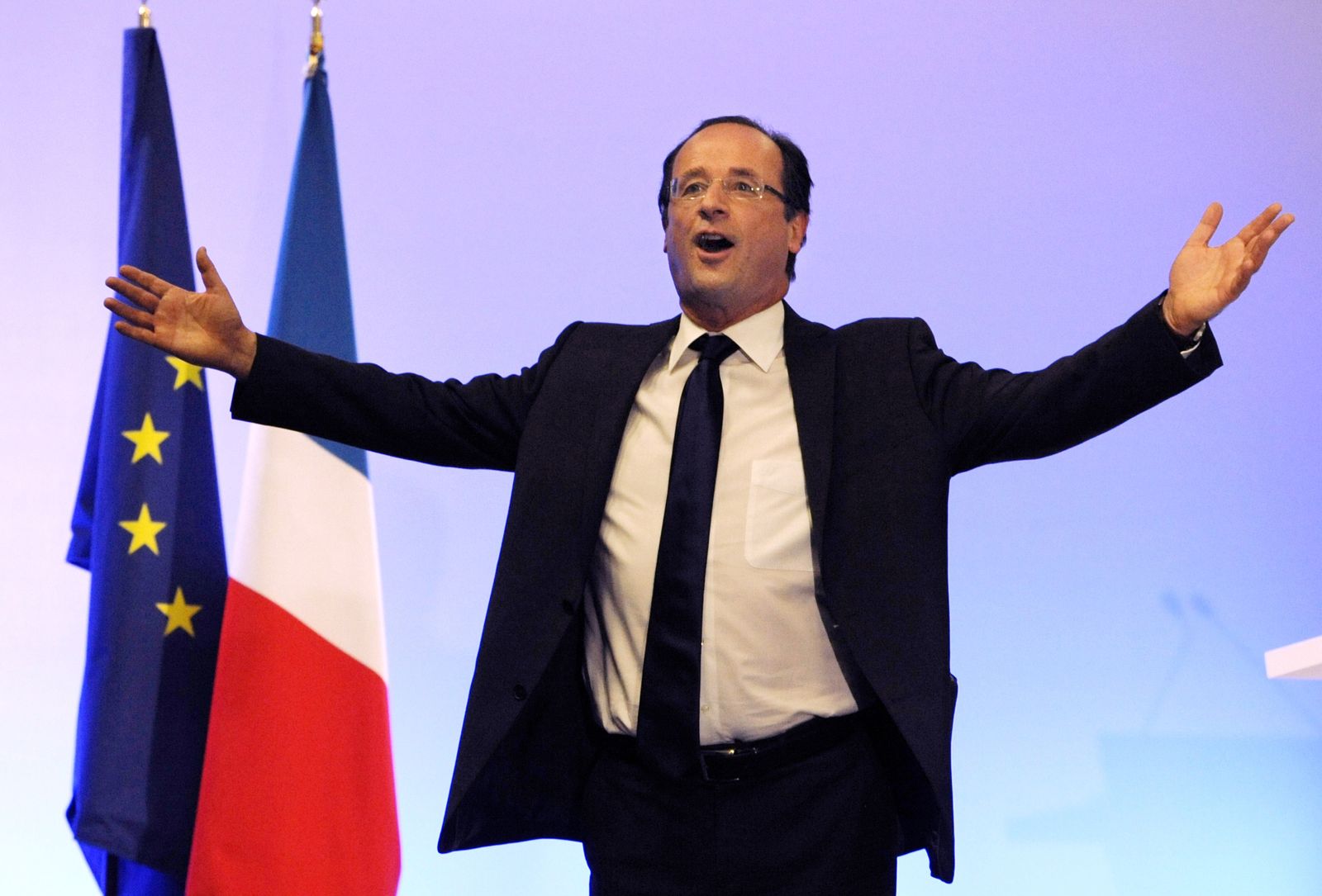 French presidential candidate François Hollande doesn't appear to have learned much from the economic crises of past decades.