The United States has been debating for years on the wisdom of allowing open homosexuality in its military. Indeed, the administration of President Barack Obama has pledged to revisit the "don't ask, don't tell" policy introduced by former President Bill Clinton.

On Thursday, though, the debate in Washington leapt across the Atlantic. Speaking before the Senate Armed Services Committee, former NATO commander and retired Marine General John J. Sheehan insinuated that the Dutch military's failure to prevent the 1995 massacre of thousands of civilians in Srebrenica during the Bosnian war was partly due to the presence of openly gay soldiers in Holland's army.

In a rambling statement on the transformation of European militaries after the end of the Cold War, Sheehan said that the Dutch battalion at Srebrenica "was under strength, poorly led, and the Serbs came into town, handcuffed the soldiers to the telephone poles, marched the Muslims off, and executed them."

When asked by Committee Chairman Carl Levin if Dutch leaders had told him that the service of homosexual soldiers was to blame, Sheehan said "yes they did. They included that as part of the problem."

The Netherlands on Friday was quick to react to Sheehan's testimony. Dutch Defense Minister Eimert van Middelkoop issued a statement calling the remarks "outrageous and unworthy of a soldier." He went on to say, "I do not want to waste any more words on the matter."

Dutch Prime Minister Jan Peter Balkenende said the remarks were "disgraceful" and "should never have been made. ... It is way off the mark to talk like that about people and the work they do under very difficult circumstances." He added that he would not take up the matter with Obama because Sheehan is retired.

Wim van den Burg, head of the Dutch military union AFMP, called Sheehan's comments "ridiculous" and "out of the realm of fiction."

The Srebrenica slaughter was the largest massacre in Europe since the end of World War II. It occurred when the Dutch were serving as part of an undermanned United Nations peacekeeping force which was trying to prevent Serbian troops from overrunning declared "safe areas" during the Bosnian War. When the Serbs moved in on Srebrenica, the Dutch force put up little resistance. Some 8,000 Muslim men and boys were murdered.

Committee Chairman Levin said that Sheehan's attempt to connect Dutch military shortcomings to the service of homosexuals in Holland's military "was totally off target." Sheehan was NATO's Supreme Allied Commander Atlantic in the mid-1990s. 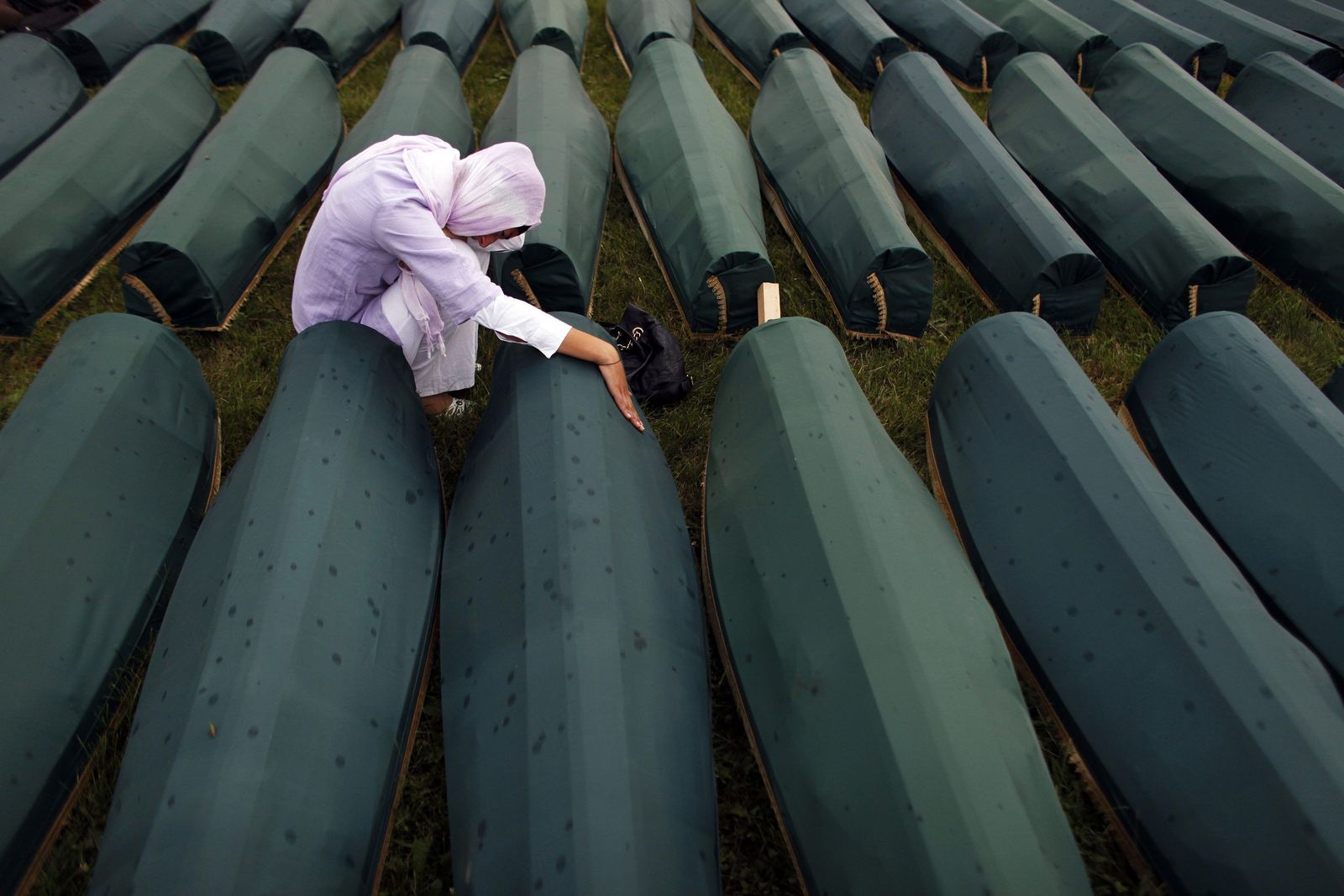 A Muslim woman praying next to newly identified victims of the Srebrenica massacre in July of last year. On Thursday, retired US General John J. Sheehan said that gays in the Dutch military were partly to blame for their failure to prevent the slaughter.