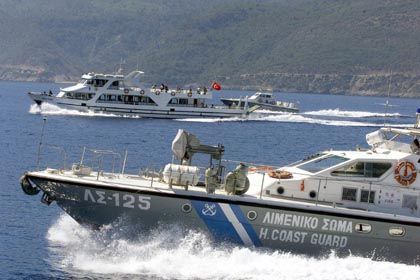 Greece may be in violation of international law in its treatment of asylum seekers.

It is hardly a secret that Greece has shown reluctance recently to accept refugees and asylum seekers. Earlier this year, the Mediterranean country was lampooned for the fact that it turned down almost all of the asylum applications it received from Iraqis fleeing violence back home.

But now it looks as though Greece may be in blatant violation of human rights norms. Reports released this month by Greek and German refugee organisations suggest that the Greek coast guard in the Aegean Sea has been systematically maltreating and obstructing asylum seekers arriving on their shores.

Fact-finding missions conducted in the summer and October of 2007 by the German Working Group on Refugees, Pro Asyl, and the Greek Group of Lawyers for the Rights of Refugees and Migrants found that refugee seekers' boats, often barely afloat, are being forced out of Greece's territorial waters. Some passengers are being set ashore on uninhabited islands on the Turkish Greek border region, provided with no water or food.

The investigative missions visited three detention centers on Greek islands and found the conditions to be "degrading and inhuman." In one case, on the island of Chios, there were reports of electric shock treatments, mock executions and beatings.

In an independent report, the Greek branch of the United Nations Refugee Agency (UNHCR), described the detention center on Samos, an island less than two kilometers from the Turkish coast, as being "deplorable" and demanded that the government close it down. Fully 391 people were found living in a room designed for 120. The staff consisted of one doctor, one social worker and a caretaker.

The number of asylum seekers is up dramatically from last year. By September of this year, 3,549 people had been arrested while attempting to cross the border on Samos, up from 1,580 in 2006. Thirty-six had been reported drowned and 34 missing, the highest figures of their kind.

Many of the new arrivals are coming from war-torn Afghanistan, Iraq and Somalia. They are often referred to in the media as "illegal immigrants" while in fact most have the right to seek asylum under the Geneva Convention.

"Branding the entire group as illegal creates the impression that it is legitimate to 'struggle to curb' this influx," wrote Bruce Leimsidor, a professor of EU immigration law in Venice, in the International Herald Tribune earlier this month. "But it is hardly legitimate to hinder access to asylum, and it puts Greece in violation of international accords concerning asylum and human rights."

Greece has repeatedly been criticised by the UNHCR for preventing access to asylum. At 2 percent, the country recognises the lowest percentage of asylum claims in the EU, where an average of 20 percent of all refugee claims are granted.

According to Pro Asyl, all refugees -- including minors -- are detained upon arrival on the islands. They are placed under deportation orders and not provided with any information about their rights or legal counsel. Most are detained for about three months before being forced, often physically, to leave. These practices are in violation of the Geneva Convention, the European convention of human rights and Greek and international law.

Pro Asyl is demanding a response to the allegations from the European Union and its institutions. Not only does the coast define Greece's national territory, it also represents the external border of the European Union.