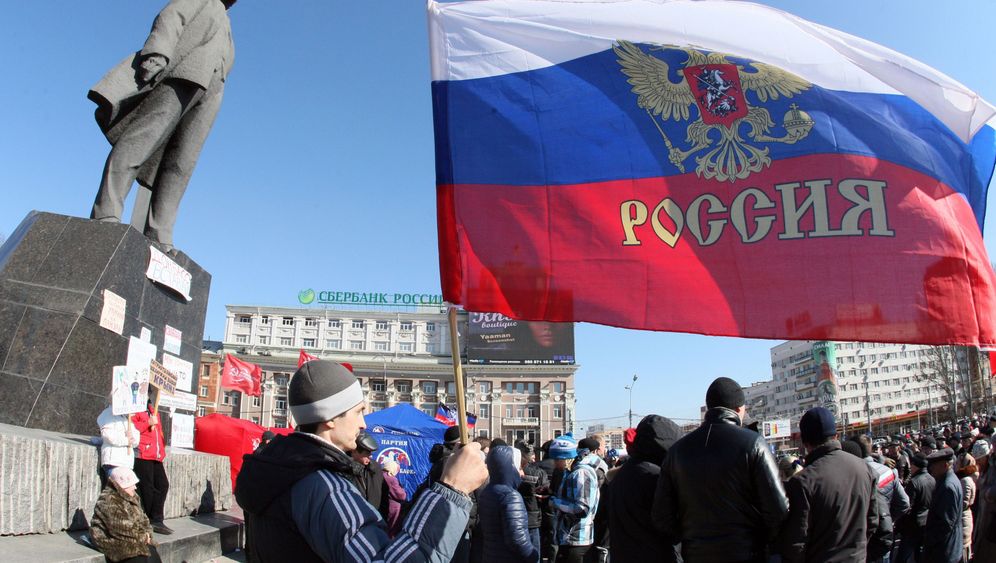 Photo Gallery: 'God Have Mercy on the New Government'

The pensioner Oxana Kremenyuk limps as she passes by the House of Culture in a small village in eastern Ukraine. As a young woman, she used to dance here. Today the stucco is crumbling and the windows are broken. "The people in Kiev are driving our country into civil war," she says. "These good-for-nothings should be slaving away the way we do here." Kremenyuk receives a pension of about €90 ($125) a month. In order to ensure there is food on the table, she keeps 10 chickens and a pig.

Kremenyuk's village of Maidan, with its three dozen homes, is a peaceful place in a gentle, hilly landscape. The village is 378 kilometers (235 miles) -- but also worlds apart -- from the Maidan in the capital city of Kiev, the Independence Square that has become known around the world since the start of the revolution. Most of the village's homes have fallen into a state of disrepair and young families moved away long ago. The people living here don't think much of the revolution taking place in the western part of the country.

In the eastern part of Ukraine, with several large cities including Donetsk, Kharkiv and Dnepropetrovsk, polls show three-quarters of those surveyed rejecting the popular revolt in Kiev. Between 70 and as many as 90 percent of the residents in this region say that Russian, and not Ukrainian, is their primary language. In Kharkiv, locals threw eggs at Vitali Klitchko, one of the protest leaders.

After the Crimean peninsula, eastern Ukraine has become the second powder keg in the conflict with Russia -- only it is a much larger one than the former. At the end of last week, the government in Moscow put the fuse on display.

After at least one person died and dozens were injured in clashes between friends and opponents of Russia in Donetsk, the foreign minister in Moscow warned: "Russia is aware of its responsibility for the life of compatriots and citizens in Ukraine and reserves the right to take these people under protection."

At the same time, the Kremlin again began mobilizing tank and artillery units. Some 4,000 men marched near the Ukrainian border and para-troopers also performed drills. It would be difficult to make a threat more clear.

In Kiev, politicians seemed to react helplessly. On Thursday, the Ukrainian parliament voted to establish a 60,000-strong National Guard. On Facebook, Interior Minister Arsen Avakov wrote: "We will mobilize the guard in a very short time. It will protect the border and maintain order in the country. This is our answer to the foreign destabilization happening in the country."

But given that Maidan fighters associated with the radical "Right Sector" are also expected to join the guard, Moscow state television promptly scoffed, "They shouldn't call the troops the national guard, but rather the nationalist guard. These are the same people who shot at police in Kiev. They will follow any order to strike down pro-Russian protests in Kharkiv or Donetsk."

Indeed, the conflict could ultimately split Ukraine -- with the east turning to Moscow and the west to the European Union. If that were to happen, it's possible the new government in Kiev would lose the part of the country that is most important economically because the coal mines and the steelmaking plants of the east comprise Ukraine's economic heart. The large firms are highly dependent on Russian orders. Ninety percent of Russian nuclear power plants, for example, are equipped with turbines from the Kharkiv-based high-tech firm Turboatom.

When it comes to the geo-political power-play for Ukraine, the ace up Putin's sleeve is the east, not Crimea. It would be easy for him to light the fuse there, even without a military operation.

His intelligence service agents could simply continue to prod protesters there. In order to eliminate any doubts that Kiev, Brussels and Washington might have had about Moscow's determination, Putin conducted a major maneuver at the end of February that involved 150,000 soldiers, 880 tanks and 90 fighter jets.

Konstantin Zatulin, director of the Institute of CIS Countries, claims that the Russians wouldn't even have to invade for eastern Ukraine to disintegrate. He believes that the people of eastern Ukraine will refuse to accept the political results of the revolution in Kiev, that they will create their own power structures and sabotage the national presidential election planned for May 25. "I don't think that Kiev will succeed in maintaining control over the east for long," Zatulin says.

Hawks in Moscow are hoping that rage will continue to grow among coal and steelworkers. If their good salaries and social benefits are placed at risk, they could quickly form a front against the government in Kiev.

'God Have Mercy on the New Government'

Toppled ex-President Viktor Yanukovych had barely fled to Russia, but he was already threatening, "if the workers in Donetsk rise, then God have mercy on the new government in Kiev."

In addition, Moscow is openly betting on destabilization. Part of its effort to aid this process includes the financing by the Kremlin of so-called patriot clubs and pro-Russian associations in Ukraine. During the protests in Kharkiv and also some in Donetsk, voices of firebrands shouting "Russia, Russia," could be heard -- people who had been bussed in from neighboring regions in Russia. The watches they wore showed the time in Moscow, not that in Kiev.

Among the groups involved is the Eurasian Youth Movement, headed by Aleksandr Dugin of Russia. Dugin, the son of a general, has enjoyed a remarkable rise under Putin's regime. Back in 2000, he had to receive people coming to meet with him in a narrow back room. In the past, Dugin served as the chief ideologist for the since banned ethno-nationalist National Bolshevik Party, a right-wing political grouping.

Today his treatises are published in Kremlin-aligned tabloid newspapers that have circulations in the millions. "Putin is on his way to becoming the leader of the real free world," Dugin writes. "It is only Putin who decisively confronts American hegemony. The Russian president is a bulwark against Washington's policy of installing puppet governments around the world through bloody coups."

As the head of the Center for Conservative Studies, he has even advanced to become a professor at the respected Moscow State University. His youth movement has been collecting money for a "true popular revolution in Ukraine" for weeks now. He has called on the Russian-speaking population in his neighboring country to blockade the buildings of Ukraine's SBU intelligence service and to "arm themselves and organized self-defense forces." Under the slogan, "Send tanks to Kiev," the youth movement has also been propagating a military intervention in eastern Ukraine.

The case of Kharkiv demonstrates the simplicity with which Moscow's auxiliaries can trigger a region's descent into chaos. Opponents of the West-oriented Kiev government already organized a pro-Russian conference in Ukraine's second-largest city in February. Mikhail Dobkin, the former governor the region around Kharkiv served as their leader.

On the same day, his opponents, supporters of the Kiev Maidan movement, with the aid of right-wing radical hooligans from the local football club, occupied two stories of the governor's headquarters, the region's administrative seat. They included pro-European students wearing metal-rimmed glasses, but also many men with clubs, helmets, bullet-proof vests and even a few with firearms. They said they wanted to "topple the governor."

In the hallways, the activists spread out sleeping bags on the red carpet. The occupiers' intellectual leader, poet and novelist Serhiy Zhadan, whose works have also been published internationally, proudly showed off the field kitchen they had set up in the lobby. "There's a wary, but also peaceful coexistence in the building," Zhadan said before pro-Russian protestors recaptured the two floors just one day later. Zhadan has been in the hospital ever since with a head injury.

Locals Don't Know Who Is Leading

The leaders in Kharkiv have changed in recent weeks with such frequency that many of the 1.4 million residents no longer know who is actually in charge -- not to mention whether it is someone from Moscow or from Kiev.

Two weeks ago, the new government in Kiev placed Dobkin under house arrest. Justice officials also ordered Gennady Kernes, the popular mayor of Kharkiv and one of Dobkin's most important allies, to Kiev. Prosecutors have accused him of unlawful deprivation of freedom, torture and making a death threat. "I am innocent and a victim of political revenge," Kernes claims.

Moreover, the new leaders in Kiev are doing little to integrate their Russia-friendly opponents in the east. On its second day of rule, the government introduced a law aimed at eliminating Russian as an official language -- as if the country didn't have more important problems. Acting Ukrainian President Oleksandr Turchynov didn't sign the law in the end, but the damage had already been done, with many Russians in the country feeling threatened.

'It Will be Easy to Bring People to the Boiling Point'

At the beginning of March, Pavel Gubarev, the head of the pro-Russian People's Militia of Donbass, declared himself the "people's governor" of the Donetsk region. Shortly before his arrest by the Ukrainian domestic intelligence agency, the Security Service of Ukraine, Gubarev met with SPIEGEL reporters in a conspiratorial apartment in downtown Donetsk and explained his plans for annexation into Russia.

"Many people write to me that they want to defend their homes against the fascists in Kiev. They have pistols, machine guns, protective shields, baseball bats and helmets," the leader said. "It will be easy to bring the people to a boiling point. They hate the Ukrainian oligarchs and their political minions."

The investigation into Gubarev is being led by the Ukrainian chief prosecutor in Kiev, a member of the nationalist Svoboda party. Gubarev's supporters have pledged militant protests to free the "people's governor."

Gubarov has already given his marching orders for the fight: "Not one step back!" It's a slogan well-known to people in the region. It originates from an order given by Josef Stalin to Soviet soldiers on July 1942 in their battle against the Nazis.