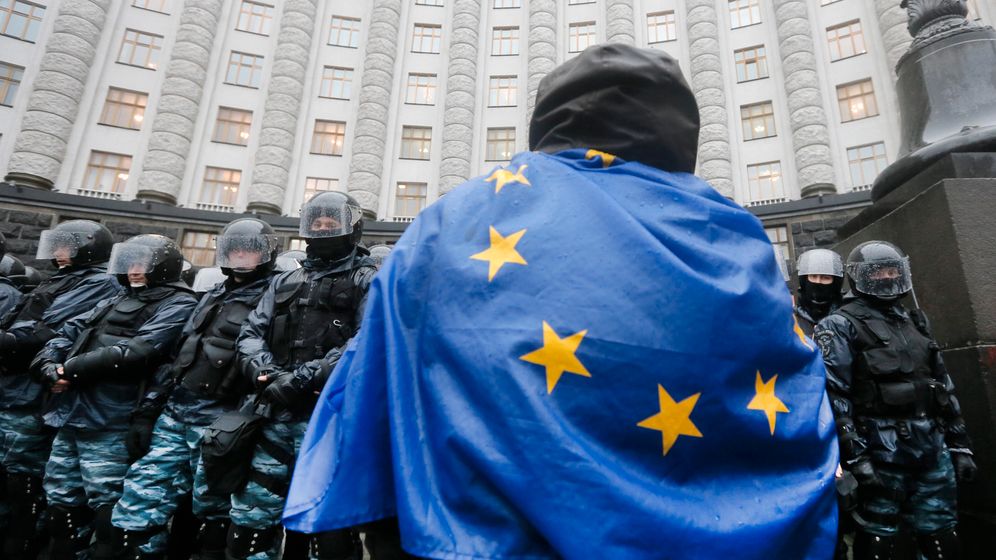 Russian President Vladimir Putin's decisive move came on Nov. 9. That day, after years of courtship, and several months of promises and threats, he met with Ukrainian President Viktor Yanukovych at a military airport near Moscow. The meeting was so clandestine the Russians initially denied that it had taken place at all.

Before that point, the plan had been for Yanukovych to sign a 900-page association agreement, a sort of engagement contract, with the European Union in the Lithuanian capital of Vilnius on Nov. 29. But in early November near Moscow, Putin seems to have sealed an alliance with Ukraine, preempting his rivals in Brussels. And last Thursday Yanukovych postponed the signing of the EU agreement indefinitely.

After giving temporary asylum to whistleblower Edward Snowden and brokering a deal to have Syria give up its chemical weapons, it was Putin's third recent victory over the West, albeit probably not a permanent one. After all, Yanukovych's agreement with Putin is a marriage of convenience, not a marriage of love.

This tug-of-war began four years ago, when the EU proposed an "eastern partnership" with Ukraine as well as Armenia, Azerbaijan, Georgia, Moldova and Belarus. The EU offered cooperation, free trade and financial contributions in exchange for democratic reforms. Officials in Brussels spoke enthusiastically about the emergence of an historic Eastern European policy not unlike former German Chancellor Willy Brandt's rapprochement with the Warsaw Pact countries in the 1970s. The planned partnership agreements were intended to facilitate visa-free travel, reduce tariffs and introduce European norms. The only thing that was not offered was EU membership.

The EU's other goal, even though it was not as openly expressed, was to limit Russia's influence and define how far Europe extends into the east. For Russia, the struggle to win over Ukraine is not only about maintaining its geopolitical influence, but about having control over a region that was the nucleus of the Russian empire a millennium ago. The word Ukraine translates as "border country," and many feel the capital Kiev is the mother of all Russian cities.

This helped create Cold War-style grappling between Moscow and Brussels. The Russian president, hardened by his fights in the Kremlin, is more adept than EU bureaucrats at manipulating people with venality and affections. None of the top European politicians made a serious effort to win over Ukraine, with neither German Chancellor Angela Merkel nor European Commission President José Manuel Barroso flying to Kiev to convince its wavering president.

"I believe the unprecedented pressure from the Russians was the decisive factor," says former Polish Prime Minister and intermediary Aleksander Kwasniewski. "The Russians used everything in their arsenal." Elmar Brok, chairman of the foreign affairs committee in the European Parliament, says: "Yanukovych kept all options open until the end, so as to get the best possible deal."

The official reason for the agreement's failure is Yulia Tymoshenko, the opposition politician who has been in prison for the last two years. The EU had made her release a condition of the agreement. Yanukovych was unwilling to release his former rival, and last week the parliament in Kiev failed to approve a bill that would have secured her release.

But then there are the financial incentives. In the end, the Russian president seems to have promised his Ukrainian counterpart several billion euros in the form of subsidies, debt forgiveness and duty-free imports. The EU, for its part, had offered Ukraine loans worth €610 million ($827 million), which it had increased at the last moment, along with the vague prospect of a €1 billion loan from the International Monetary Fund (IMF). Yanukovych chose Putin's billions instead.

The EU had been banking on its radiant appeal, and on its great promise of prosperity, freedom and democracy, but now Brussels must confront the fact that, for the first time, an attempt at rapprochement was rebuffed because the price was wrong. "If Yanukovych doesn't want to make a deal, then he simply doesn't want to," says Brok.

Battle of the Unions

The EU's eastern partnership had gotten off to a rocky start even before the Ukrainian incident. Belarus dashed the EU's hopes it would join when protesters were violently suppressed after the reelection of President Alexander Lukashenko in 2010. Armenia called off an association agreement with the EU this September.

In the case of Ukraine, it initially seemed as if the Europeans' rational arguments would prevail over Russia's threatening gestures. According to an internal EU analysis, joining the "Eurasian Union" -- a Russia-backed proposed political and economic union including Russia, Tajikistan, Kazahkstan, Belarus and others -- would severely limit Ukraine's sovereignty. Once such a union had been formed, Kiev would no longer be able to enter into any other free trade agreements without Moscow's approval. An alliance with Moscow would thus have the exclusive nature of a marriage. The EU's eastern partnership, in contrast, would still allow Ukraine to enter into other alliances.

And Yanukovych, who has been considered a puppet of the Kremlin, even implemented many of the reforms demanded by the EU. The legal system and criminal law were modernized, trade restrictions were reduced and a few political prisoners were released. "He implemented more reforms than the pro-Western predecessor regime under Tymoshenko," says an EU negotiator.

But it turns out those reforms didn't go as the EU hoped. According to the Freedom House organization, democratic basic rights in these eastern partnership candidate nations have not been strengthened in the wake of EU reform demands. Instead, they claim, many of the reforms were implemented half-heartedly and governments only consolidated their power.

The Europeans had mistakenly believed Kiev would automatically turn to the West. After all, isn't half of the population in favor of closer ties with the EU? And aren't there more Ukrainian immigrant workers living in the West than in Russia? They based their argument on economic sustainability, believing they could convince Yanukovych with the prospect of long-term growth rates of at least 6 percent. By contrast, a customs union with Russia would reduce Ukraine's economic growth in the long term.

But in truth, the most important goal for Yanukovych -- who may come across as unsophisticated, but is in fact a shrewd poker player -- is to hold onto power. In order to be reelected in 2015, he needs rapid economic improvement. Ukraine has slid into recession and could even be insolvent soon. The rating agencies have repeatedly downgraded the country's credit rating. Besides, Ukraine is dependent on Russian natural gas, and Moscow has already flexed its muscles by turning off supplies in the winter on three occasions.

This is why Yanukovych needs the Putin who in recent months has made the consequences of an EU deal unmistakably clear to Ukraine. In August, Russian officials began painstakingly inspecting trucks from Ukraine bringing goods across the border into Russia. Ukrainian oligarch Viktor Pinchuck was barred from importing steel pipes to Russia, and a former cabinet minister was prevented from selling his chocolate in the country.

These measures have led to a 25 percent decline in exports since 2011. Ukraine exports a third of its goods to Russia and other former countries of the former Soviet Union, and only 25 percent to the EU. Russia also threatened that it would require Ukrainians to apply for visas to travel to the country in the future.

Three days after the secret meeting in Moscow, Ukrainian oligarchs, apparently in consultation with the Kremlin, asked Yanukovych to postpone signing the EU association treaty by a year.

The Kremlin made it clear the harassment could become permanent. Sergei Glazyev, Putin's advisor for the economic reintegration of the republics that gained their independence after the collapse of the Soviet Union, predicted that Kiev would experience an "economic disaster" if it signed the agreement with the EU. "Ukraine is sacrificing its sovereignty," he said threateningly at a conference on the Crimean Peninsula, which is former Russian territory.

Vladislav Surkov -- the Kremlin's former main ideologist, who had fallen out of favor but was brought back by Putin two months ago -- was sitting in one of the back rows. His mission was to help Moscow regain its control over the countries of the former Soviet Union.

When someone like Zurkov appears at a meeting, it means intrigues are under way. In Russia, Zurkov has founded parties and let them fade away based on Putin's needs. He could do the same thing in Ukraine, by siphoning off Yanukovych's pro-Russian voters and all but destroying Yanukovych's chances of reelection.

It is unclear whether Putin had to voice all of these threats in his meeting with Yanukovych. It was probably no longer necessary. Yanukovych had already understood that his only hope for political survival was to throw in his lot with the Russians.

The threats were also accompanied by promises. Putin held out the prospect of loans, lower gas prices and debt forgiveness with Russian energy giant Gazprom, to which Ukraine owes $1.3 billion.

Another project could suffer a fate similar to that of the association agreement: a natural gas contract, negotiated under the auspices of the EU, which was supposed to be signed on Nov. 22. Once again, everything seemed to have been agreed upon, but then the Ukrainians were suddenly saying minor technical details had yet to be ironed out. "This has already been going back and forth for a year now," says one of the frustrated lead negotiators.

Everyone had expected the agreement to be signed, because it would have enabled the Ukrainians to liberate themselves, gas-wise, from the clutches of the Russians, especially as they now pay significantly more for Russian gas than major Western companies, such as German energy conglomerate RWE. Under the new agreement, pipelines in EU member-state Slovakia would be rebuilt to allow for reverse gas flows, so gas destined for Western Europe could also be transported to Ukraine in the future.

But Yanukovych is hesitating. Because of the necessary upgrading work, the gas from the West could not begin flowing to Ukraine until next September. This would make the Ukrainians vulnerable to blackmail, at least this winter. And the negotiations over the new contract already seem to have helped Yanukovych, with the Russians signaling significant price cuts for Ukraine. It appears Yanukovych has played his cards right once again.

That is, if he can contain the political anger within Ukraine. On Sunday, the largest demonstration in the country since 2004's Orange Revolution took place in Kiev. According police estimates, 23,000 people protested the withdrawal from the EU pact negotiations, including boxing champ Vitali Klitschko. Organizers place the number at over 100,000. Yulia Tymoshenko's daughter, Eugenia, personally reached out to Angela Merkel for help in an interview with Germany's Bild tabloid, saying that, if nothing was done, her mother would die.

In Brussels, European Commissioner for Enlargement Stefan Füle tried to compose himself last Friday. "Only when the summit officially begins will we know, once and for all, whether or not Ukraine intends to sign." But no one expects a quick agreement anymore. Even Füle is already thinking about possible next steps. He also seems somewhat at a loss when he says that the EU has no interest in engaging in a competition with Russia -- as if one hadn't already happened.

"It's difficult to say when the negotiations will be resumed," says middleman Kwasniewski. The European Parliament will be elected next year, there will be changes at the European Commission, and a presidential election in Ukraine in 2015. "It seems to me that the pause is going to be longer rather than shorter," Kwasniewski adds.