British beer is famous for tasting flat to continental Europeans. Equally flat was the mood that set in over the course of the long election night after Britons voted in Thursday's general election. The result is disappointingly undecided: The British wanted change, but not enough to actually get it.

They have obviously had enough of Labour's Gordon Brown and his government, but they do not necessarily want Conservative challenger David Cameron as prime minister. With around 36 percent of the total vote, the Tories narrowly missed their goal of winning a majority of seats in parliament. Now the British have produced a very un-British election result: a hung parliament in which no single party has a majority of seats.

In the eyes of the Brits, coalition governments have been regarded, at least up until now, as an excessively complex invention by those continental Europeans. Such governments were seen as incapable of action, and coalitions were thought to promote haggling between parties and political corruption.

The British are accustomed to having a single government party and a large opposition party in their parliament. The government -- which, thanks to the undemocratic first-past-the-post system, usually had a comfortable majority -- dictated their policies; the opposition railed against them. Once the ruling party had run out of steam, the roles were reversed.

On Friday morning, however, as the results came in, London's politicians found themselves in unchartered territory -- and that makes them nervous. Hung parliaments are a rare thing in Britain, with the most recent one being in 1974. Back then, it proved impossible for any party to form a stable government, and fresh elections were called a few months later.

With these election results, the British finally have a fractured party political landscape just like the rest of Europe. As in France and Germany, the major British parties are increasingly incapable of reflecting the ever more differentiated interests of the electorate. The result could be a reform of the British first-past-the-post electoral system, which currently favors the two largest parties.

Trying to form a government in London will be a protracted yet exciting process. Gordon Brown is trying to cling to power. As the sitting prime minister, he has the right to make the first stab at forming a government. But it's all too obvious that voters have lost trust in the gaffe-prone Brown.

Labour's only hope would be if Brown stepped down and the party tried to form a coalition together with the Liberal Democrats and the first Green Party member of parliament, under the leadership of David Miliband, the current foreign minister. That would be a "coalition of losers," warned veteran Tory politician David Davis in a preemptive verbal strike. It would, however, also be the variant that Britain would get if the UK had a similar electoral system to, say, Germany.

With over 50 percent of the vote, Labour and the Liberals could form a stable government, leaving the Conservatives, with their 36 percent, on the opposition benches. Labour will likely only be able to lure the Lib Dems on to their side if they promise to introduce a proportional representation system, however.

Despite their refreshing leader Nick Clegg, Britain's traditional third party won less than 10 percent of the seats in parliament, despite getting 23 percent of the popular vote. The Liberals fell victim to the polarization of the election campaign -- many of their sympathizers gave their votes to unloved Labour candidates, in the hopes of avoiding a Conservative government.

Given the stalemate, the Liberals will play a crucial role in forming the next government, even though they won fewer seats than in 2005. They could form a coalition with the Labour Party or with the Conservatives.

Although this election will have a momentous and lasting impact on British politics, the outcome of the elections will likely bring little change for the rest of Europe. Even if David Cameron succeeds in forming a government and moves into 10 Downing Street, it will have no dramatic impact on the European Union. From Margaret Thatcher onwards, the UK's relationship to Europe has always been dominated by British pragmatism, despite all the nationalistic rhetoric. There is little danger that the British will become an even larger stumbling block within the EU than they traditionally have been.

Despite all the professed love for the good old British pound and imperial measures, the EU can count on the Conservatives' common sense to prevail in European politics. National interests will keep any serious anti-European excesses in check. The British know that economically difficult times lie ahead, during which they might need the assistance of their European partners.

But the next British government, irrespective of its makeup, has an unenviable task ahead of it. None of the parties wanted to talk about it during the election campaign, but the cost-cutting program which the new government will have to impose on the country is going to hurt. In order to get the UK's runaway government debt under control, a good part of what the Labour government had achieved in relation to schools, hospitals, and public services will fall victim to cutbacks.

To balance the budget and fix the public finances, the future prime minister will have to prescribe even tougher cuts than those that former Prime Minister Margaret Thatcher imposed after her election victory in 1979. The cuts that she introduced then are, even to this day, the Conservatives' heaviest political baggage. 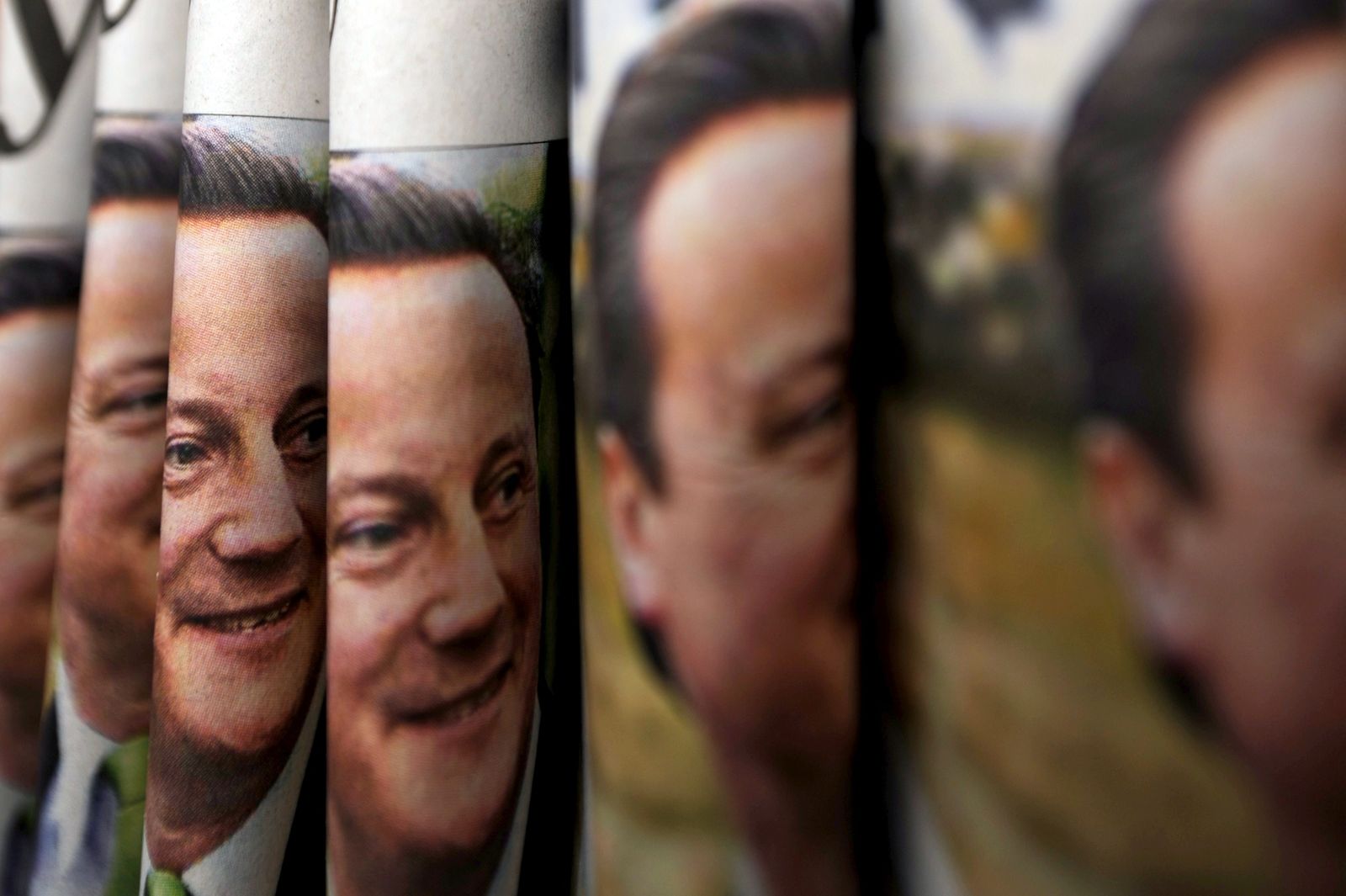 Conservative Party leader David Cameron on the cover of Friday's newspapers: Britain has its first hung parliament in decades after no single party managed to obtain a majority in Thursday's general election.