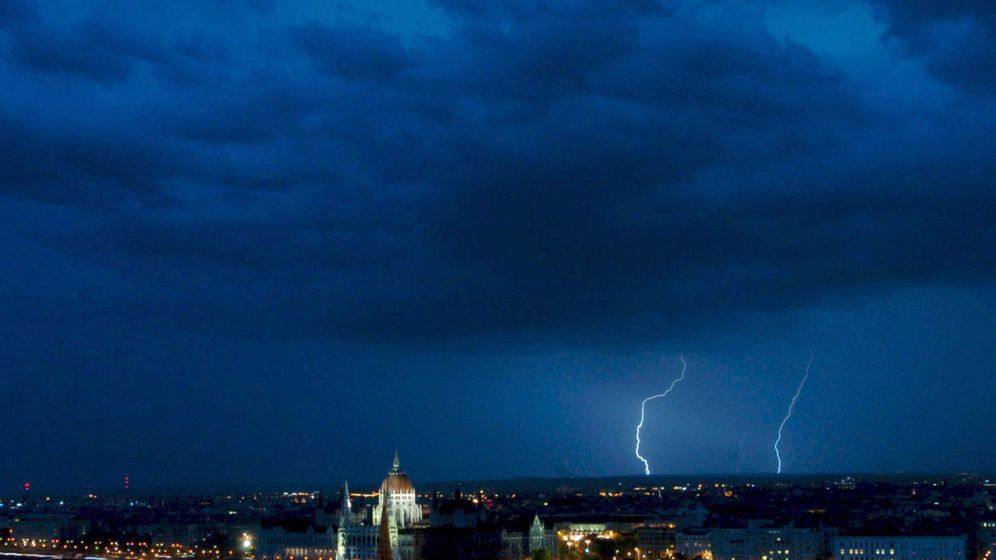 Hungarian President János Áder arrived in Berlin on Monday for what might look merely like a standard bilateral meeting between two EU leaders. But the relationship between the European Union and Hungary is anything but normal these days. Budapest, after all, bid farewell on Monday to many of the values that define the 27-member club.

In other words, a country at the center of the European Union is moving away from the principles of freedom, democracy and the rule of law.

The vote on Monday evening in Budapest easily provided Fidesz with the two-thirds majority it needed to pass the amendments, with 265 voting in favor, 11 against and 33 abstaining.

László Kövér, president of Hungarian parliament and one of the most influential men in the country, was a primary mover behind the cause. He is a veteran leader of Fidesz and, when it comes to issues of nationhood and country, he doesn't shy away from confrontation. Last Friday, in an interview with the conservative broadcaster Hír TV, he laid out his theory that the world was conspiring against Hungary.

International capitals, the EU and the United States had singled out Hungary as a "symbol of their Cold War," he said, simply because the government in Budapest had rejected the "forced path of liberalism." His rhetoric made use of the same slogans that the extreme right in Hungary has used for years.

Strong Criticism at Home and Abroad

The occasion for Kövér's tirade was the debate over constitutional reform. Yet despite massive critique from both within Hungary and abroad, he refused to consider cancelling or postponing the Monday vote.

Hungarian civil rights organizations and opposition parties spent weeks protesting the changes, with thousands of people turning out for a demonstration in front of the parliamentary building in Budapest on Saturday. Following criticism from the European Council, the European Parliament and the US State Department, European Commission President José Manuel Barroso personally appealed to Prime Minister Orbán to delay the vote last week. But several leading Fidesz politicians made it clear that there was no chance of a postponement.

That the constitutional amendments do, in fact, represent a serious departure from the principles of liberal democracy and civil rights is a view shared by the opposition, EU policymakers and also legal scholars. Hungarian constitutional law expert Gábor Halmai has called the reforms a "systematic abolishment of the constitutional order," while Hamburg-based European law expert Markus Kotzur calls the changes "highly problematic."

German Foreign Minister Guido Westerwelle, who is due to meet with President Áder on Tuesday, said the German government "has left no doubt that Europe is a community of values, and that we expect these values to be lived out." A spokeswoman for the European Commission also said the EU's executive branch "will not hesitate to use all the instruments at our disposal to make sure that member states comply with their obligations."

Among the most controversial aspects of the reform are severe limitations on the power of the constitutional court. The court will now be allowed to review the constitution or amendments to it based only on formal procedural aspects, not on their actual content. Additionally, all the court's decisions prior to the date when the country's new constitution came into force in 2012 are to be invalidated, essentially eliminating precedence.

Freedom of expression is also to be limited when it damages the broadly defined "dignity of the Hungarian nation." Students will be required to stay and work in Hungary for a certain time after finishing a university degree, or else pay tuition fees -- a measure meant to curb the emigration of highly-educated workers and academics.

The reforms also write into the constitution certain laws that had previously been overturned and deemed unconstitutional by the high court, making them essentially untouchable.These include a ban on the homeless from loitering in public spaces, and allowance of the state to prosecute them for violations; a ban on electoral campaign advertising in private media; and an exclusion of umarried, childless or same-sex couples in the official definition of family.

In the days leading up to the passage of the amendments, the opposition's rhetoric became sharper. András Schiffer, the otherwise reserved leader of the green-liberal party called "Politics Can Be Different" (LMP), said at a convention in Budapest on Saturday that an authoritarian system was emerging in Hungary, one in which no right was safe and constitutional law was being dissolved. The non-parliamentary opposition alliance "Together 2014" has called the reforms a "rampage against the constitutional order."

Such appraisals don't phase parliamentary speaker Kövér. Asked whether he thought a compromise was possible with government critics, he answered: "It's unlikely that we would find a compromise with representatives who see even same-sex marriage as conceivable."