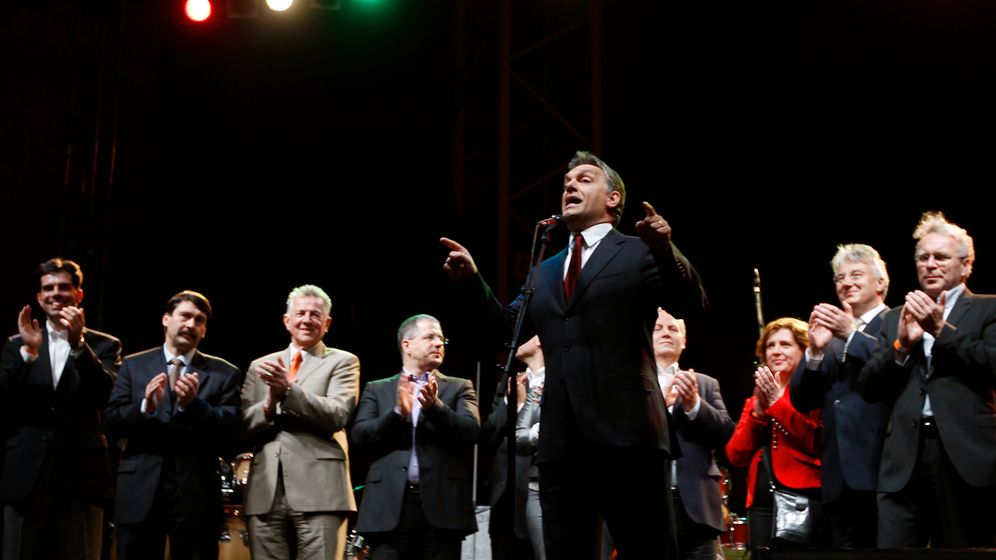 Hungarian politician Viktor Orbán spent eight long years in opposition. In the end, he didn't want to wait until the polls in Sunday's Hungarian election had closed before declaring victory. By the time he went to cast his own vote, he was already proclaimed himself the new prime minister of Hungary. "Tomorrow we will wake up in a new country," he said.

Hungary has undergone a drastic shift to the right, bringing Orbán, who was prime minister from 1998 to 2002, back into power. "Hungarians voted on Hungary and Hungary's future," a triumphant Orbán said on Sunday night, once his victory was clear. "Today Hungary's citizens have defeated hopelessness."

The preliminary election results show just how great the desire for a change in favor of the conservatives was in Hungary. Orbán's Fidesz party won around 53 percent of the vote. The party that came in second place, the governing left-leaning Socialist Party, trailed far behind, with around 19 percent of the votes. The result was not even half of the 43 percent which the Socialists won in the 2006 election. And they narrowly avoided an even worse defeat: The far-right Jobbik party secured around 17 percent of the vote and almost made it into second place. Jobbik will now enter parliament for the first time, as will the environmentalist party Politics Can Be Different (LMP), which got 7 percent of the votes.

Orbán's victory required little effort on his part, given the amount of popular anger against the Socialists' minority government and Prime Minister Gordon Bajnai, who is not affiliated with any party. The conservatives were confident of victory, and they had good reason to be so. The polls had long predicted that Fidesz would get at least an absolute majority, if not the two-thirds majority that a party needs to single-handedly change the constitution. Fidesz may still achieve that target. The party has already secured 206 of the 386 seats in the Hungarian parliament after Sunday's first round of voting. The second round will take place in two weeks' time, when run-off votes will be held in electoral districts where there was no clear winner in the first round.

Orbán kept a low profile in the weeks leading up to the election. He gave no interviews, not even to Hungarian newspapers. His supporters saw him just a few times, and even then, only from a distance -- for example, at a rally on March 15, the Hungarian national holiday, when he made an appearance next to the Erzsebet Bridge in Budapest. Otherwise he kept out of the spotlight and practically ran away when journalists approached with microphones.

His reticence was not because he is not a good speaker; on the contrary, his legendary 1989 speech played a key role in the peaceful revolution in Budapest. His political friends explained his avoidance of publicity by saying it was the regal distance of the winner who no longer needs to waste many words. An alternative explanation is given by other observers, such as the political scientist Laszlo Lengyel. He argues that Orbán was probably afraid of being asked if he planned to continue with austerity measures introduced by his predecessor Bajnai as a reaction to the economic crisis, which hit Hungary particularly hard.

It's a question which Orbán will find difficult to answer. In his few campaign appearances, he promised to get business and the health care system "back into shape," guarantee public safety, reduce taxes and create 1 million new jobs within a decade. "I feel it with all my nerves and know it deep in my heart that I face the biggest task of my life," he said during his victory speech on Sunday evening. He also emphasized the responsibilities of ordinary citizens: "I will need all the Hungarian people to solve (that task)."

He will indeed need all the help he can get. Back in 2008, Hungary nearly went bankrupt. The International Monetary Fund (IMF), the European Union and the World Bank had to come to the country's assistance with a €20 billion ($27 billion) loan. In return, Bajnai promised a tough austerity program. He radically slashed government spending and reduced the budget deficit from 9 percent of gross domestic product to 4 percent.

Orbán had railed against this course of action with excessive rhetoric. But what should he do now? Hungary is still strapped for cash, and the new government has no money available for gifts to the electorate. Foreign investors have only just regained confidence in the forint, Hungary's currency. Frivolous expenditures could scare them off again.

The election winner will therefore face a dilemma right from the first day of his term. He has no leeway to change the policies of his predecessor. He has no choice but to continue with efforts to fix the country's finances -- at least if he wants to avoid alienating Hungary's foreign donors and investors.

Danger from the Right

But in doing so he will have to cope with an aggressive opposition. The threat comes less from the Socialists, who have fallen too low and will be engaged in recriminatory navel-gazing for the foreseeable future. The real danger to Orbán comes from the right, from the fascistic Jobbik party, which agitates against Roma, Jews and especially the political establishment, which it considers to be entirely made up of corrupt criminals. Jobbik leader Gabor Vona is co-founder of the paramilitary organization Hungarian Guard, which was legally banned in 2008, and whose uniforms evoked those of Hungary's fascist Arrow Cross Party during World War II.

So far, Jobbik has directed its attacks against the Socialists. But now Orbán himself runs the risk of becoming the target of Jobbik's cheap and hate-filled tirades.

Ironically, Orbán is largely responsible for the fact that Jobbik is now stronger than ever. Orbán has changed since his first term in office. At the time, he was a liberal; now he is a right-wing conservative who enjoys playing with nationalist rhetoric and is trying to compete with the far-right in terms of ideology. He has cultivated a political style which purports to despise compromises and has denounced his political opponents as "enemies" of the nation.

The result could be that the demons which Orbán has evoked may soon be chasing after him. 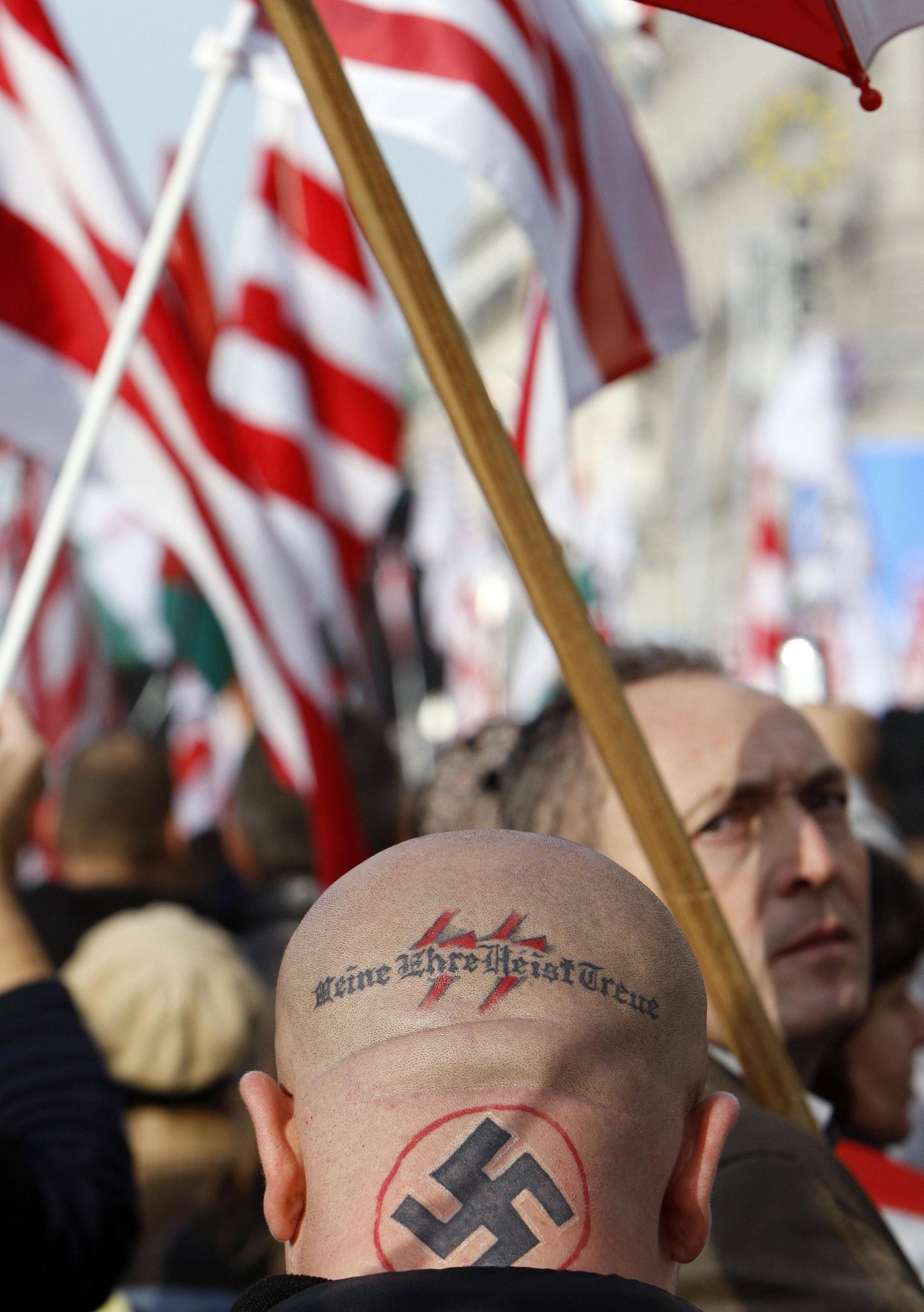 A Jobbik supporter displays the Nazi swastika and SS emblems on his head. Jobbik has used racist, anti-Roma and anti-Semitic rhetoric as its call to arms.