A winter storm brought hurricane-force winds to parts of Germany, Poland, the Czech Republic and Austria over the weekend, killing more than a dozen people and injuring scores more. Dubbed Emma, the storm caused structural damage costing millions of euros all over Germany and Austria.

The storm brought heavy rain and winds topping 222 kilometers (138 miles) per hour to Central Europe. Though not as heavy as last year's Kyrill, Emma did its share of damage and nearly brought down a plane attempting to land in HamburgThe storm hit drivers the hardest. Those venturing out on the road faced winds over 110 kilometers an hour. In Germany, at least half a dozen people were killed in traffic accidents as high winds caused drivers to lose control of their vehicles or toppled trees onto the road. A 72-year-old scooter driver in Bavaria was killed when winds pushed his scooter into oncoming traffic and he was hit by a truck. Near Halle in eastern Germany, strong sidewinds caused a truck driver to lose control of his vehicle and crash, he died of his injuries in the hospital. Other traffic deaths were reported in the states of Baden-Wurttemburg and Saxony. Auto drivers weren't the only ones in danger from the high winds: The driver of a high-speed ICE train was injured when his train hit a fallen tree near Bonn.

Austria was also hard hit by traffic accidents. A German vacationer was killed in Tirol when his camper trailer fell on him, and another German driver was killed by a falling tree near the winter sports resort of Kitzbühel. Two other traffic deaths were reported in Austria, including a British tourist killed by a boulder that fell on the taxi they were riding in.

The storm caused casualties further afield as well. Two people in the Czech Republic were killed, and an 11-year-old girl there was badly injured by a falling tree. Two more people were killed in Poland. 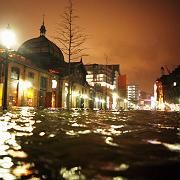 Emma wreaked havoc on roads and flooded parts of Germany with sudden downpours and severe hailstorms that shut down traffic for the few brave enough to venture outside. Tornados formed by the storm touched down in parts of Germany, tearing the roofs off buildings. In Hesse, thirty people had to be evacuated to a nearby school gymnasium after the roof of their building was torn off by high winds. Storm surges over the weekend also left Hamburg's famous Fish Market flooded. And train tracks in Saxony, Thuringia, Hessen and North Rhine-Westfalia were blocked by debris from the storm, causing disruptions to important railway lines.

The storm downed power lines across Germany, knocking out more than 5,000 transformer stations and cutting off electricity in an estimated 150,000 homes.

For safety's sake, sporting events including a Bundesliga game pitting FC Energie Cottbus against VfB Stuttgart and the a women's ski slalom World Cup event in Zwiesel were called off. The Frankfurt airport, Germany's largest, had to cancel almost 200 flights; the remainder faced delays ranging from half and hour to more than two and a half.