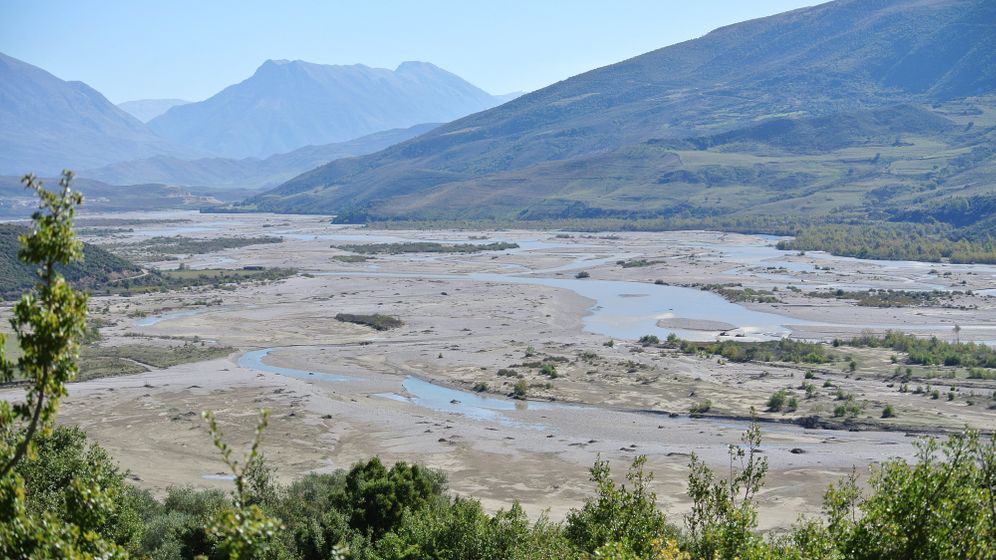 Photo Gallery: A Threat to Nature in the Balkans

How did Europe's rivers look before they were tamed -- back when they were allowed to flow freely through the beds they spent centuries carving out?

Most of the Continent's waterways, like the Elbe, the Rhine and the Danube, have long since been hemmed in. But examples of Europe's largely vanished wilderness remain. Such as the Vjosë, which flows unfettered through its valley in southwestern Albania, splitting off into tributaries that once again flow together in a constant game of give-and-take with solid ground.

"With every flood, the Vjosë shifts its course," says Ulrich Eichelmann, a conservationist with the organization RiverWatch, as he looks across to the narrow ribbon of alluvial forest that clings to the side of the valley. "The river fills the entire valley," says the 52-year-old. "Such a thing in Europe can only be found here, in the Balkans." Then he pauses. On the opposite shore, a cormorant takes flight.

The Vjosë: 270 kilometers (168 miles) of river landscape, from the Pindus Mountains of Greece all the way down to the Adriatic Sea. Not a single dam disturbs the water's course. No concrete bed directs its flow. And every pebble tells a story, says Eichelmann -- of pristine mountain enclaves, of waterfalls, gorges and lakes.

The 'Blue Heart of Europe'

The Vjosë is not alone. Several crystal clear, untamed rivers rush through many countries in the region. "The blue heart of Europe beats in the Balkans," says Eichelmann, who, together with environmental organization EuroNatur, works to preserve these natural water systems.

Experts say that approximately 80 percent of rivers in the Balkans remain in good or very good ecological condition -- a paradise for fish, freshwater molluscs, snails and insects.

But Europe's last wild rivers are now at risk. More than 570 large dams, complete with hydroelectric power plants (each with a capacity of more than one megawatt), are planned for the region (see graphic).

With money from international financial institutions -- among them Deutsche Bank, the World Bank and the European Bank for Reconstruction and Development (EBRD) -- dam construction is well underway.

Eichelmann describes a "gold rush mentality," with the "hydro-lobby" grasping for the last untapped energy market in Europe. Just before the Balkan states are forced to comply with ecological regulations as part of the process of joining the European Union, the industry is trying to establish a fait accompli: "Something that has long been banned in the EU, they're now trying quickly to pull off in the Balkans," says Eichelmann. It's a sell-off of untouched nature in the name of green energy and climate protection.

In Albania, the taming of wild waterways is already in full swing. The poverty-stricken country is currently in the grips of a construction boom. Three large dams have already been completed on the Drin River in the north. The Norwegian company Statkraft has acquired concessions for construction on the Devoll River. And the Vjosë, too, is under threat. Eight dams are planned. One is already under construction, where the river squeezes through a narrow gap near the village of Kalivaç. Excavators there haul heaps of gravel and sand; the dam is to be nearly 50 meters high and 350 meters wide (165 by 1,150 feet).

The man behind the construction of this dam is an Italian named Francesco Becchetti. Back in Italy, the 47-year-old owns a construction and waste removal empire. He also owns an Albanian television station. Those wishing to meet him must first submit to screening at the hands of one of his TV journalists, before being escorted down a dusty road to Kalivaç. There, the industrialist waits with his entourage -- over a dozen sturdy men crowded around a bevy of expensive sedans.

At the office unit on the construction site, Becchetti shows his plans for the Vjosë dam. He's brought along a thick stack of expert reports. His project has already swallowed up €70 million ($93 million) he says, including money from Deutsche Bank. Meanwhile the financial institution has backed out of the joint venture.

During the walk to the half-finished construction site, the conversation turns to the Vjosë. Is Becchetti aware that he is dealing with one of Europe's last remaining wild rivers? No, answers the builder. "The dam won't be a problem for the environment," he says, "somebody had to explain this to me first, but we will add some steps for trout."

A fishladder for trout? To mitigate the total loss of a unique habitat? From the perspective of ecologists, it sounds like a bad joke. "If the Vjosë degenerates into a chain of reservoirs," fears Spase Shumka, from the department of natural sciences at the Agricultural University of Tirana, "the eel and mullet here, for example, would not be able to survive." The fish, endangered throughout Europe, currently migrate up to 200 kilometers (124 miles) up the Vjosë.

Countless birds, such as little ringed plovers, little egrets and great egrets are dependent on the rivers' floodplains, says Shumka. And many fish species found only in the Balkans, such as the Pindus stone loach, could be brought to the brink of extinction.

No Choice but Hydropower?

In the Albanian capital of Tirana, however, it quickly becomes clear that nature conservancy is not high on the Albanian government' priority list.

Minister of Energy and Industry Damian Gjiknuri lives in the government quarter along Dëshmorët e Kombit Boulevard. He made an honest effort during his first few months in office to raise understanding for nature conservation. But the country's energy supply is an issue closer to his heart.

"Albania is still importing 35 to 40 percent of its electricity needs," says Gjiknuri. In order to change that, Albania has no other choice but to pursue hydroelectric power. The potential is enormous: "We have the possibility to generate 10 times more electricity from hydropower."

For the same reason, the state-owned energy company Elektrani na Makedonija (ELEM) wants to build two dams in neighboring Macedonia -- in the middle of a national park.

The 73,000-hectare (180,000-acre) Mavrovo nature reserve lies on the border of Albania and Kosovo and is one of the oldest national parks in Europe. It contains old-growth beech forests, where wolves and bears still prowl. Its streams are home to otters, trout and freshwater crayfish. The pride of the region is the Balkan lynx; only about 50 specimens of the feline species continue to roam the woods -- extinction is well in sight.

Two large dams are planned for Mavrovo National Park, one of those at Lukovo Pole. The place is perched high in the mountains, where the trees give way to dewy alpine meadows and biodiversity is at its apex. A nearby valley may become a candidate for UNESCO World Heritage status.

The planned Lukovo Pole Dam will be 71 meters tall. A new road must be paved through the park in order to build it. In July, the World Bank will decide whether to support the project with $70 million in funding.

Further down, in the valley, is the Boskov Most, the last refuge of the Balkan lynx. That's where a dam is planned which will block the Mala Reka River. The EBRD has already pledged €65 million for the construction project. A narrow road leads uphill along the Mala Reka. After driving for a few minutes, Eichelmann stops the car and jumps out. The first snow of winter lies across the valley like a porous blanket. The air is stingingly cold. The river froths and roars.

Eichelmann scrambles down the embankment. Suddenly he comes upon a world of light and shadow, cold and moisture. The water burbles over moss-covered rocks, disappearing into hidden hollows, forcing its way through ridges of icicles.

On an overhanging rock, a white-throated dipper has built a nest out of moss. There, among a labyrinth of roots and stones, live species of trout found only in the Balkans and the larvae of caddis flies and dragonflies. "That's what I love: this unique variety," says Eichelmann. What will happen to the Mala Reka when the dam is built? "The riverbed will be dry most of the time," he says. The water of the future reservoir will still flow through the Mala Reka, but only in times of high electricity demand. Engineers call the technique "hydropeaking." Once a day, a tidal wave will rip through the valley.

Biologists fear that a majority of the ecosystem's plants and animals would not survive the daily deluge. Furthermore, the roads necessary for the construction of the dam would fragment the Mavrovo reserve, making life difficult for wild animals there.

International investors seem not to care. "None of the comprehensive studies and additional monitoring undertaken has suggested that the project could affect the national park status of Mavrovo," the EBRD said in a statement. The power station operator for the power company ELEM likewise chose a reassuring tone, saying that the project would not endanger diversity.

Macedonia is one of the member states of the "Regions 202020 Network." The countries involved have pledged to increase the share of renewable energies in their mix to at least 20 percent by 2020 and to reduce greenhouse gas emissions by 20 percent relative to 1990 levels in the same time period. "We need hydropower to take care of the future of our country," says ELEM head Dejan Boskovski.

But international pressure is increasing. The International Union for Conservation of Nature (IUCN) passed a resolution demanding that the dam project in Mavrovo be abandoned. And last week, several hundred European researchers, including the German natural scientist Ernst Ulrich von Weizsäcker, a former German parliamentarian and nephew of the ex-German President Richard von Weizsäcker, appealed directly to the World Bank and the EBRD in an effort to halt financing for the Mavrovo dam. "We are surprised that your institutions have even considered supporting these dam projects," reads the open letter. The projects "undermine the very idea of national parks" and "violate EU law, such as the Natura 2000 Directives and the Water Framework Directive."

If nothing happens, "these rivers will be destroyed just as ours were in the 1970s, and it will be done with our help," says preservationist Ulrich Eichelmann. "I am not opposed to hydropower, but we need a master plan for the Balkans to determine where it is okay to build such power plants and where it is not."

A Glimmer of Hope

Many of those countries in the Balkans that aren't yet members of the EU would ultimately like to join. "One of the things these countries have to offer the union is scenery," Eichelmann says.

But most Balkan countries remain mired in economic crisis. And where there is a paucity of money, environmental protection often takes a back seat. Not even a rigorous look at river diversity has been undertaken thus far.

Still, the economic crisis could indirectly benefit the rivers. In many places, dam construction projects have become playthings for speculators -- which is why Albania's Energy Minister Gjiknuri has revoked some building permits. "Many investors haven't started construction at all, but were trying to trade their licenses on the black market," he says. "Some only pretended" to build "so that they could increase their price in the market."

Gjiknuri doesn't explicitly mention the half-finished Kalivaç dam. But he can't hide the fact that he is unhappy with the situation there too. With good reason. Despite the energy with which Becchetti presents his Vjosë River project, almost no progress has been made in the last four years.

That gives Ulrich Eichelmann a glimmer of hope. "Thus far, no irreparable harm has been done to the Vjosë," he says. "We will do everything we can to block the power plant -- but it is a race against time."