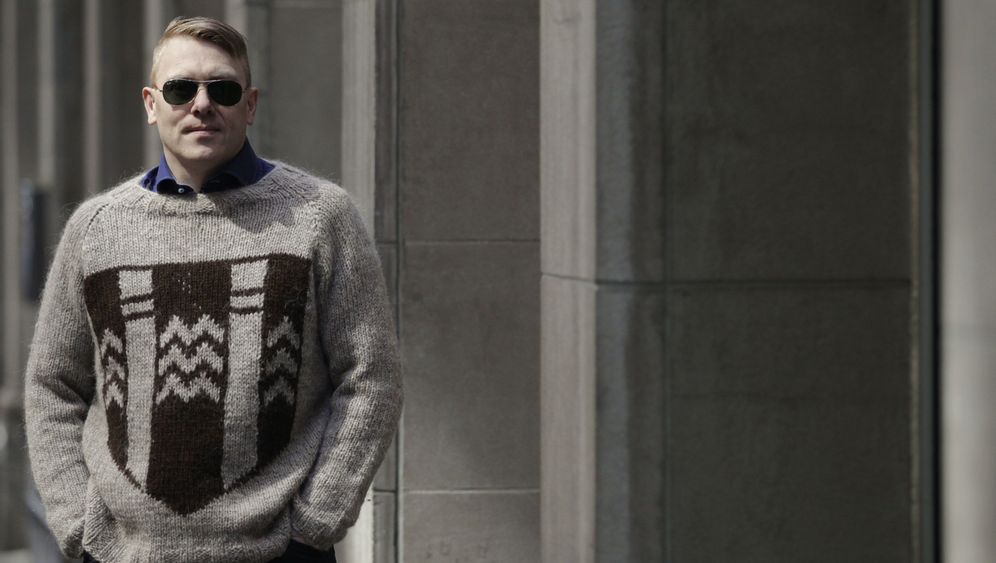 There are five minutes to go before the broadcast begins, as Jon Gnarr sits in a television studio, searching for the right formulation. "You could say that comedy is tragedy plus time," he says. "The longer ago the nightmare is, the more I have to laugh about it." He puts down his teacup, which smells of peppermint and a little vodka. "It's as if someone had thrown up on your carpeting after a long party. You smell it and you ask your friends who it was. Then Bill says it was Jon, and Jon says it was Frank. That's Iceland, Iceland after the financial crisis."

Jon Gnarr is a tall blonde guy who wears jeans and unironed shirts. He doesn't show off the power he actually holds -- over the 8,100 people who report to him, or over his annual budget of two billion Icelandic kroner (€12 million). He is the 44-year-old mayor of Reykjavík, the most important man in the city. In return, Reykjavík pays him €7,000 ($10,150) a month and provides him with a large official car.

The mayor is a punk rocker. He used to look the part, but now he keeps his hair neatly combed and parted on one side. In his younger days Gnarr, a.k.a. Johnny Punk, used to storm into a Reykjavík bookstore and tear the pictures of Sid Vicious and The Clash from the pages of German magazine Bravo to demonstrate the aesthetics of protest to the other members of his band, the "Dripping Noses." He used his music to confront society with its own ugliness. He dropped out of school, drove a taxi, worked in a mental institution, composed poetry and wrote a fictitious autobiography so violent that Icelandic publishers initially turned it down.

The book was called "The Indians," because he hated cowboys as a child.

Infiltrating the System to Bring it Down

When life as a punk rocker became too demanding, Gnarr fathered five children and became a comedian. That was until 2010, when the citizens of Reykjavík elected him as their mayor.

Today he's at the top of a system he once fought, first with hate and then with humor, and he wants to explain why. "I want to break it up, the system, but first I have to infiltrate it before I can get rid of it."

Even during the campaign, he made people laugh. He promised to put a polar bear in the zoo (a joke at these latitudes), open a Disney theme park near Reykjavík, and turn the parliament into a drug-free body within 10 years. At the end of the campaign he made another promise: to break all his previous promises after the election. It was a caricature of a bid for the city's highest office, in which Johnny Punk showed the establishment both that he had seen through it and how he felt about it.

His first official act was to introduce "Hello Day." On Sept. 1 Reykjavík's residents were expected to greet each other as cheerfully as possible. Soon afterwards Gnarr raised electricity prices in the city, and laid off 60 people at the municipal energy company. In late February the mayor cancelled subsidies for children attending music schools, and raised taxes to cover his budget. These are the achievements of a man who sought his office so he could do everything differently. They are tantamount to political suicide.

But Gnarr's career is not based on traditional rules. In March, an Icelandic polling firm asked Reykjavík citizens about their confidence in politics. They named Gnarr the "most honorable politician" in the country, and felt that he had the "most charm" and was more down-to-earth than any other politician. In the poll, the mayor was almost 10 percentage points ahead of the prime minister.

Some sociologists do not see Gnarr's election as a protest, but as a signal. At a time when Icelanders elected a comic as mayor of their capital instead of opting for a more familiar politician, 35 percent of British voters did not vote for either of the two biggest parties in the country's parliamentary election -- a result not seen since 1918.

For the first time since 1945, a coalition government is now in charge in London. In the United States, the Tea Party, which emerged as a protest movement against the bank bailouts, achieved its first significant successes in the fall of 2010. In June, the party of Dutch right-wing populist Geert Wilders captured 24 seats in parliament, making it the country's third-strongest political force. And in the German state of North Rhine-Westphalia, more than 40 percent of eligible voters stayed home in May 2010.

Cleaning up After the Party

After his punk phase and a few years working on the assembly line at Volvo in Sweden, Gnarr brought humor to Iceland. He made a name for himself as a stand-up comedian, first with a morning radio show and then with a TV show in which he poked fun at Nordic sternness. Today his films are sold in stores next to those of the Coen brothers, and the national airline Icelandair shows his satires on its in-flight program. And on May 29, 2010, 34.7 percent of Reykjavík voters checked the box next to Gnarr's name.

Many citizens of Reykjavík, home to almost two-thirds of Iceland's population of 318,000, believe that what the city needs now is someone who does things differently, who can clean up after the party. The banks were once willing to lend to anyone who asked; they raised new funds with wildly unrealistic promises of returns to Dutch, British and German investors until the market collapsed. "If there was ever a time when we Icelanders should stick together and face our troubles together, that time is now," then-Prime Minister Geir Haarde said in October 2008.

Lehman Brothers had declared bankruptcy in New York only a few weeks earlier, and the Icelanders, affluent and well-paid, watched their financial market implode. The government resigned. The kroner lost roughly two-thirds of its value against the euro. And suddenly families with mortgages denominated in yen or dollars were left with debts their grandchildren would still be paying off.

Many sold their expensive SUVs so that they could make mortgage payments. Families moved out of their newly-built houses. Everyone knew someone who was unemployed. After that, Icelanders vacationed at home, and in Reykjavik they elected Gnarr mayor -- a man who had just starred in a cinematic tragicomedy as "Georg Bjarnfredarson," a highly gifted man just released from prison, who tries to start a new life in a changed world.

Gnarr's political base is the "Best Party," which he founded. He admitted everyone he knew to the party: punk rockers from his old band and people from the theater and television. "Jon is something of a national actor," says his friend Sigurjon Kjartansson, a punk singer. "He made the nation laugh, and there are whole generations that trust him because of it."

There are days, says Sigurjon, when he isn't quite sure whether he has lost his friend, a man he felt he knew better than anyone else, to city hall and the new position. "When Jon appears on my talk show on the Channel 2 TV station after one of those terribly long meetings at city hall, it's more and more difficult for him to let go," says Sigurjon. "It must be tough for him."

A few blocks away, Ragnar Bragason sits down on one of the old sofas at the Kaffibarinn café. He filmed Iceland's most successful comedy series with Gnarr and has just sold the rights to Hollywood. They have worked together for years. "I'm his animal tamer," says Bragason.

But now they live in different worlds. Bragason is in rehearsals with actors for a new film. Mayor Gnarr is thinking about raising the local business tax. In the first two months of his term, Jon was constantly calling Bragason to tell him: "Oh my God, this job is horrible." But then the calls stopped. Since then Ragnar has heard almost nothing from Jon. "He has immersed himself in the role of mayor."

"A Strange Time in my Life"

The next day, Gnarr is sitting in his office, which has the best view of the rows of houses in Tjörnin, the city's most stately neighborhood. If he could do as he wished, says Gnarr, capitalism would no longer exist in Iceland. "We need to be economically self-sufficient. We have what it takes to do this. After the crisis, it became clear to me things could not continue as they were," he says.

Gnarr wants more direct democracy, so the factors that led to the crash will not repeat themselves. He wants the people to decide, but he lacks the authority to make the necessary changes. He wants to reduce unemployment, which has spiked from one to eight percent, but so far he's had to let people go. "The first year was a strange time in my life," says Gnarr.

When he gave a speech at the Reykjavík city hall to mark the approval of the budget plan, he explained his understanding of politics. "My son came down with a rare and serious illness," he said. "The surgeon wanted to operate immediately, the specialist wanted to wait and the pediatrician was undecided. But I had to make a decision. I think that much of what happened in that situation is similar to my work today," Gnarr said, and ended the speech by saying: "Don't worry, my son is in good shape today."

Many committed non-voters in Reykjavík voted for Gnarr. This could be his secret and the nightmare of his political enemies, who are clinging to the hope that he will disappear from the political scene as quickly as he arrived.

Will you really be disappearing soon, Jon Gnarr? The mayor rolls up his left sleeve and holds up a fresh tattoo to the light. It's 15 centimeters (six inches) long and pale blue: the coat of arms of the City of Reykjavík.