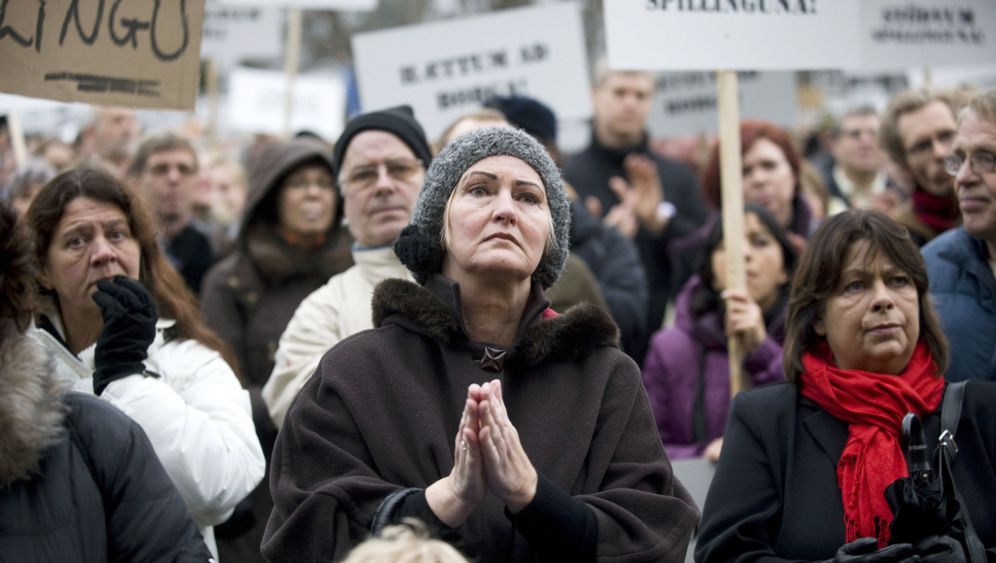 The man supposedly to blame for the whole mess is wearing a checkered jacket and keeping his head low. Geir Haarde was Iceland's prime minister when it suffered a near-death experience almost three years ago. In the space of a few days, the country's three largest banks collapsed, the value of the krona nosedived and the country was on the verge of national bankruptcy.

The former premier is now the first politician in all of Europe who will stand trial for the financial disaster. Iceland's 1905 constitution makes it possible to convict political figures of a crime if they did not act -- or did not act quickly enough -- in a situation posing a danger to the state. Haarde could face up to two years in prison.

"Of course, from today's perspective," Haarde says, "I would have done a few things differently back then." He is not even able to maintain his own office anymore. Instead, friends have set him up with an office in a law firm and are bankrolling his legal expenses.

"I'm everyone's scapegoat, and yet I committed no crimes," Haarde says. "On the contrary, we rescued Iceland back then -- and we did so without the taxpayers having to pick up the banks' tab."

Aiming for a Better Future

As bitter as he sounds, Haarde also has proof to back up his claim. Iceland has returned to the international money market in record time. This summer, the government issued bonds for the first time since the crisis. Iceland's budget deficit is at 2.7 percent of its gross domestic product (GDP). The unemployment rate has fallen to roughly 6 percent, the Icelandic economy is expected to grow by 2.2 percent this year, and the krona is relatively stable, with inflation at 2.7 percent.

Nevertheless, tens of thousands of Icelanders are still deeply in debt -- and will be paying for the excesses of the boom years for decades to come.

Now the coalition government in Reykjavik, made up of the Social Democratic Alliance and the Left-Green Movement, is trying to get past the trauma of the collapse once and for all. It wants to join the European Union and, despite the euro crisis, introduce the common currency as soon as possible.

From Hopeless to Hopeful

Haarde epitomizes the type of politician who has ruled Iceland for decades: inconspicuous, conservative and armed with ideas about economic policy that fall within the neoliberal mainstream. In the 1990s, Haarde supported lifting all restrictions on capital transactions and privatizing banks. He was the foreign minister when Iceland's banks gorged themselves on foreign capital. The combined total assets of the three largest banks eventually surpassed more than 10 times the country's GDP, and Icelanders went on a collective buying spree -- paid for with borrowed money.

Haarde was already prime minister in 2008, when shockwaves from the Lehman Brothers bankruptcy struck the volcanic island, prompting foreigners to pull their money out of the country overnight. The court accuses him of having ignored all warning signs.

Haarde defends himself by saying that, "Before the crisis, no one anticipated what sort of a tsunami was heading our way." He calls the case against him a "political farce" instigated by his rivals in the parties of the coalition government. As he sees it, many parties are to blame for the catastrophe, including Icelandic bankers, who acted negligently, and the foreigners who gave them too much money.

Before popular anger forced Haarde to resign in January 2009, his cabinet had enacted emergency laws that prevented government bankruptcy. Iceland's three main banks were nationalized and declared bankrupt. "We were lucky," Haarde says, "because we were simply too small to bail them out." Although the government guaranteed its citizens' savings, it opted not to honor the claims of foreign creditors.

Back then, the International Monetary Fund (IMF) provided the island nation with an emergency loan of $2.1 billion (€1.6 billion). Today, it praises the country that once stood on the verge of bankruptcy. Even Joseph Stiglitz, the American who won the 2001 Nobel Prize in economics, finds that Iceland did "the right thing."

Signs of Recovery and Desperation

The recovery is evident in Reykjavik. The streets are beginning to fill up with brand-new Land Rovers and other SUVs again, and sushi has replaced dried cod as a main course. The new concert hall on the harbor, which stood as a concrete skeleton only two years ago, has been opened. Not long ago, the west wind was still howling through the open windows of half-finished office towers along the coastal road. But now all the facades are glassed over.

Even so, the fallout from the crisis can still be seen in suburbs like Ulfarsfell. Here, some families are living on the ground floor of their new houses, whose second floors consist of nothing but steel framing. Every other house is unfinished, but there are still no construction workers in sight.

In the boom years, tens of thousands of Icelanders took out mortgages. When the krona went into a tailspin that saw it lose up to 70 percent of its value against the euro, many Icelanders were suddenly no longer able make their mortgage payments. Since the banks had hedged their loans against inflation, the mortgages became more expensive the more the currency was devalued, while the wages and salaries of those who had taken them out remained constant.

Lisa Björk Ingolfsdottir is one of few who make no secret of their dire straits. Just five years ago, her life seemed perfect. She had a full-time job as a bookkeeper and 9 million krona (about €57,000) in the bank. She borrowed an additional 13 million krona (about €83,000) and bought the ground-floor apartment of a two-story building near the capital. It also boasted a garden that her two daughters could play in.

But when the credit bubble burst, Ingolfsdottir's lifelong dream was shattered. First she lost her job. "At first," she says, "I was actually happy. I planned to use my free time to go back to school and get my degree." Then her marriage went sour and she divorced.

Today, Ingolfsdottir is a single mother living on welfare. The bank owns her apartment again. Although she was still managing to make her payments until six months ago, inflation and taxes had driven her debts up to about 21 million krona. She doesn't even want to know exactly how much she owes now. "There are no jobs for me," she says, "and even if there were, they wouldn't pay enough for me to be able to pay off this mountain of debt."

Running for the Exits

Experts estimate that more than 10 percent of Icelandic borrowers are in a similarly hopeless situation. Indeed, according to Brynjar Peturson Young, the high levels of debt for private households and small businesses are the most dangerous legacy of the crisis, a toxic legacy that will undermine Iceland's economic strength for many years to come.

During the boom years, Young was a management consultant. His diploma from the prestigious Massachusetts Institute of Technology rests on his piano's music stand. He managed to pay off his fashionable but sparsely furnished bachelor's pad, and he now teaches economics at the university. "I advise my students to leave the country," he says. "Nothing is getting better here." He pulls up charts on his laptop to buttress his arguments. "The loan payments are swallowing up too much available income," he explains. "People will have to save for decades."

As Young sees it, this deprives the middle class, in particular, of incentives to work. "Because of their debts," he says, "it's almost impossible for doctors, teachers or skilled workers to raise their standard of living." In his view, this explains why the number of people moving to Norway, Denmark and the Netherlands has not gone down despite the economic recovery. Indeed, in the last three years, roughly 8,000 Icelanders have abandoned the island. And, in a country with a total population of only 320,000, losing so many primarily young and well-educated people presents a serious problem.

For Foreign Minister Ossur Skarphedinsson, who has been negotiating Iceland's accession to the European Union with Brussels since 2010, the brain drain is one more reason for pushing the talks forward. Skarphedinsson, a trained marine biologist with a fondness for snuff, is a man of staggering optimism. Despite dire reports of the impending demise of the common currency, he views the EU as "a zone of stability" and believes that German Chancellor Angela Merkel and French President Nicolas Sarkozy "will never abandon the euro." Indeed, if the EU can only manage to monitor the budgets of its members more effectively, he is certain that "the euro will emerge from the crisis a stronger currency."

Likewise, it doesn't trouble Skarphedinsson that surveys indicate that a majority of his countrymen are against joining the EU and adopting the euro. "Once the currency has been rescued, Icelanders will be for it," he counters, adding that the trauma of the crisis will be offset when people have euros in their wallets and in the bank.

"We are a small nation with a micro-currency," Skarphedinsson explains. As he sees it, this means that every investment and every business failure has a measurable effect on the krona's exchange rate. Besides, he adds, Icelanders should never again expose themselves to the risk of becoming overnight paupers.

"As a biologist, I know that it's advantageous for fish to come together into schools," he says. "The fact that Iceland is only a small fish in the European school doesn't scare me at all."