Cyprus did its part on Wednesday night. The country's parliament approved a 2013 budget which included far-reaching austerity measures so as to satisfy the conditions for the impending bailout of the debt-stricken country. While aimed at significantly reducing the country's budget deficit, the spending cuts and tax hikes are likely to result in a 3.5 percent shrinkage of the economy in 2013 along with an uptick in unemployment.

Yet despite the measures, Nicosia's would-be creditors remain at odds over the emergency aid deal, even as the country teeters on the brink of insolvency. According to a report in the Thursday issue of the influential German daily Süddeutsche Zeitung, the International Monetary Fund is demanding a partial Cypriot default involving private creditors before it joins the bailout deal.

Citing anonymous sources familiar with the negotiations, the Süddeutsche writes that the IMF is concerned that, despite the austerity measures the country has now adopted, it still wouldn't be able to shoulder the interest payments due on its debt. Several European countries agree with the IMF. Others, however, believe that such a default could be dangerous. After all, when private creditors were pressured to write down a portion of their Greek debt holdings, the euro zone went to great lengths to present the move as one that would not be repeated. Should such a default now be applied to Cyprus, it could severely undermine investor trust in the euro zone.

"The situation in Cyprus is much worse than it is in Greece," one high-ranking EU official told the paper.

Days Away from Insolvency

It is hard to argue. This week, the country was forced to borrow €250 million ($330 million) from the pension funds of state-owned companies just to be able to pay the holiday salaries of civil servants. The move came on the heels of a high-level Finance Ministry official saying that Nicosia was just days away from insolvency.

The troika of international lenders, made up of the European Central Bank, the European Commission and the IMF, are looking at an aid package of €17 billion for the country. As a percentage of GDP, it would be the largest bailout yet of a euro-zone member state. Fully €10 billion of that would go towards propping up the country's wobbly banking sector.

According to the Süddeutsche, one possible model in circulation for keeping the IMF on board envisions Russia sending €5 billion to the IMF which would then send the money on to Nicosia. Not only would such a solution guarantee the formal involvement of the IMF, as German Chancellor Angela Merkel has insisted, but it would also benefit Russia. After all, a large chunk of the money invested in Cypriot banks comes from wealthy Russians. Indeed, it is a situation that has many in the EU wary of the coming Cypriot bailout. Many have accused Cyprus of not doing enough to combat money laundering and fear that some of the money coming from Russia is not entirely aboveboard.

What's more, many are also skeptical of the IMF partial default plan for economic reasons as well. Whereas many foreign banks held Greek debt when the debt haircut was engineered in March of this year, most Cypriot bonds are held by Cypriot banks. Should they be forced to write down part of that debt, their situation will only worsen, requiring more bailout help and driving up Cypriot debt. The net result would be largely neutral.

A final decision on the deal is set to be made in the coming weeks with the goal of sending the initial tranche of emergency aid in February. Until then, the pension funds of state-owned firms will have to do. 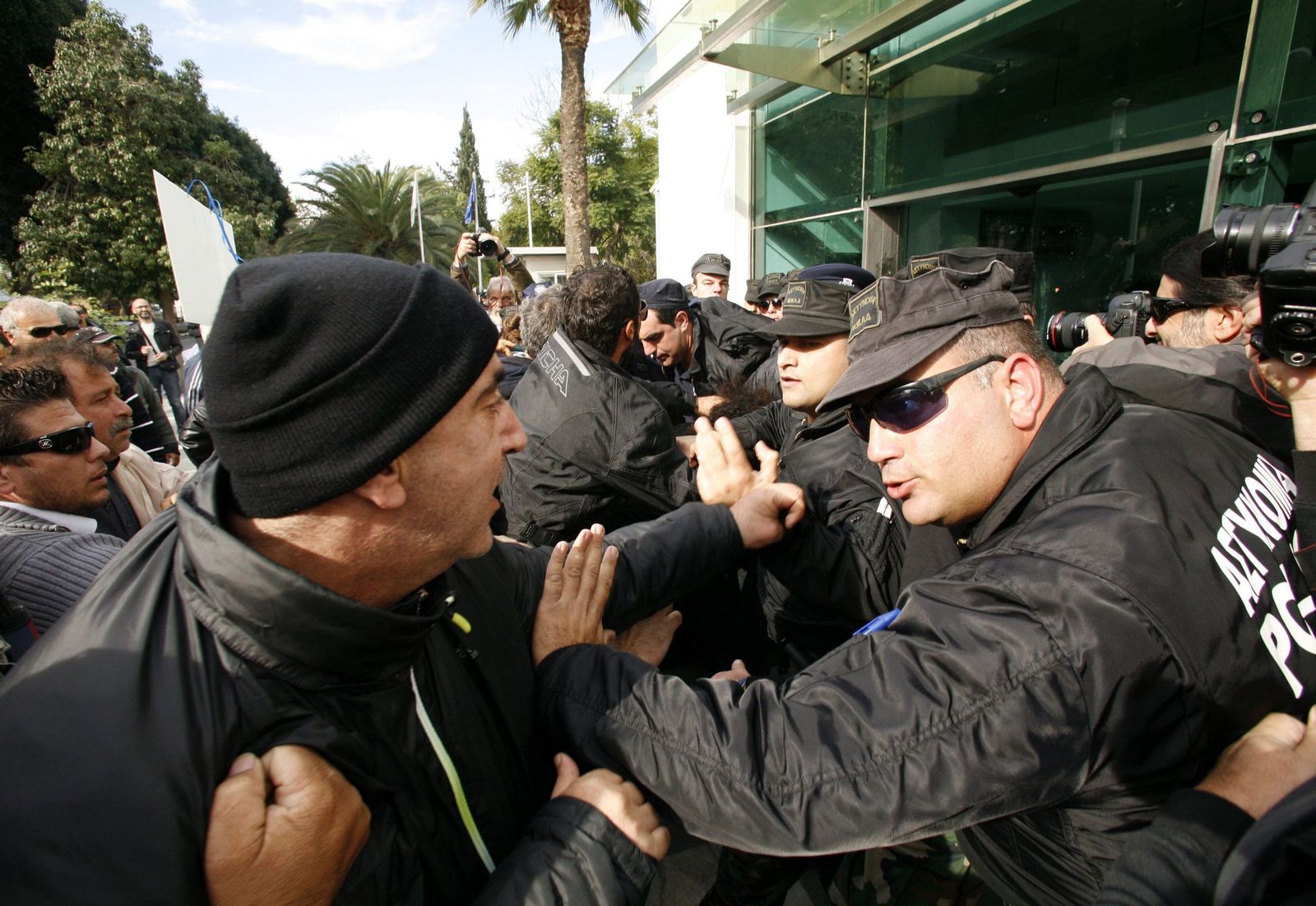 Anti-austerity demonstrators clash with security personnel in Cyprus in December.