Paulo Nogueira Batista, 58, is a fan of classical music, a connoisseur of German literature and an advocate of straight talking. As executive director for his native Brazil and 10 smaller countries, he is a member of the Executve Board, the highest-ranking operational decision-making body of the

His counterparts from the United States and Europe have often witnessed the combative personality of this economist with wavy, salt-and-pepper hair, who attended a high school in Bonn for two years in his youth. Batista is one of the most persistent critics of Western dominance in the IMF.

He often derides the Washington-based organization, headed by French politician Christine Lagarde, as a "North Atlantic monetary fund," because, as he argues, Americans and Europeans are primarily interested in defending their interests and preventing emerging economies like Brazil from exerting their rightful influence in the fund. He resents the Europeans for increasingly availing themselves of the fund's assets to combat their euro crisis, even though they have enough money of their own. "The euro countries abuse their power within the IMF," Batista is fond of saying.

In mid-May, the Brazilian had yet another opportunity to sharply criticize the Europeans' behavior. The bailout package for Cyprus was up for a vote in the IMF Executive Board, a package that includes €1 billion ($1.3 billion) in IMF funds. As it turned out, there were others who shared the Brazilian's critical position.

As evidenced by written position statements and the speaking notes of participants, the event turned into a critical review of Europe's bailout policy. The IMF found itself in the dock along with the European Commission and the European Central Bank (ECB), the two other members of the so-called troika, as well as the countries of the euro zone.

Although no names were mentioned, the criticism was directed at all European politicians involved in the bailout, from German Chancellor Angela Merkel and Finance Minister Wolfgang Schäuble (both members of the center-right Christian Democratic Union, or CDU) to French President François Hollande, European Commission President José Manuel Barroso and Economic and Monetary Affairs Commissioner Olli Rehn. The criticism applies in particular to the Eurogroup president, Dutch politician Jeroen Dijsselbloem, who has even recommended the Cyprus bailout as a model for future bailout programs.

Normally, the IMF Executive Board is a secretive group of experts. There are rarely any leaks, and certainly no evidence of sharp indictments or internal strife, emerging from the tight-lipped group, to which the IMF member states appoint experienced officials from their finance ministries and central banks.

There is something of an esprit de corps among these experts, dominated by a sense of being responsible for the fate of the global economy, which makes the severity of the criticism the envoys of the IMF member states had for the Europeans seem all the more unusual. The charges ranged from sheer inability to denial of reality and excessive confidence.

The envoys aren't acting independently. They usually coordinate their decisions and statements closely with their respective governments. In other words, what they said behind closed doors occurred with the knowledge and intent of their governments.

The fact that the IMF conference delivered a damning indictment of European politicians efforts to save the euro is not just proof of their dissatisfaction with the most recent decisions on the Cyprus bailout. It also documents a deep-seated change in the global economy's most important financial institution. Prior to the financial and euro crisis, it was usually the West that faulted the developing nations and emerging economies for incurring excessive debt and constantly begging for money from the IMF.

The situation is reversed today. The former petitioners now find themselves having to fend off constant requests for assistance from Europe. And they note with growing indignation how promises are being broken in Paris, Brussels and Berlin, figures are being massaged and many of the principles that the West once established for the IMF's activities are being violated. As a result, it was primarily the representatives of emerging nations that were voicing criticicism at the conference.

"Every program needs a pinch of optimism but in this one the required dose ofgoodwill -- or suspension of disbelief, if you will -- goes way beyond the average," Batista noted caustically in his position statement. And indeed, the troika does expect the Cyprus economy to begin growing again soon. To achieve this goal, the island republic is expected to raise taxes substantially and slash spending in the coming years to clean up its budget. But it was precisely this crisis-fighting cocktail that plunged other troubled countries like Greece and Portugal even more deeply into recession.

The savings Cyprus is expected to realize would already be difficult to achieve under normal conditions, Batista noted. According to him, the country would have to develop a new business model while immersed in the worst crisis it has ever faced, and this in the context of unfavorable global economic conditions.

The Canadian representative expressed similar views, saying "it remains unclear how Cyprus will adapt to a new sustainable business model in the long term and what sectors will lead the recovery and growth."

The confidential documents revealed the skepticism with which the shareholders view the bailout approach that has been taken for Cyprus. The expectation that growth will pick up again by 2015 "is too optimistic in our view," the Brazilian representative, who also represents Argentina, wrote in his statement. He knows what he is talking about. Argentina slid into a national bankruptcy 10 years ago, and only when its currency, the peso, was de-pegged from the dollar was the economy able to recover. Cyprus lacks this option, because it no longer has its own currency to devalue.

EU Forecasts for Cyprus Seen as Too Optimistic

The politicians involved in saving the euro should learn from their experiences with the program for Greece, the Saudi Arabian representatives warned, noting projections for Greece had been "consistently optimistic." They wrote: "We are not convinced about the realism of staff growth projections for Cyprus." Australia's representative, too, voiced doubt about whether the Cypriot program could be effective without changes.

In their position paper, the two Russian representatives said that the changes in debt structure predicted by the troika were little more than a "guess," and added: "We should stand ready that every 3 to 6 months the program will need to be considerably revised."

There was only one bright spot for the Europeans: The criticism of the original plan was even greater than the carping over the current bailout package. The Europeans had initially decided to involve ordinary savers in the cost of restructuring the country's two largest banks. Only in the second round were savings deposits of less than €100,000 ($130,000) spared.

The first proposal was simply "unacceptable," complained Brazilian representative Batista. "It should never have been endorsed." The reasons for the economist's irritation are understandable. In the euro zone, deposits of up to €100,000 are insured and therefore off-limits. If politicians decided to seize these deposits, it could shatter confidence in the global financial system, with dramatic consequences. Savers around the world could attempt to empty their accounts in order to move their savings to a safe place.

In this context, the Saudis reminded the European politicians of the global economic crisis at the beginning of the 1930s, when savings and jobs were destroyed on a massive scale. "We should keep in mind that the insurance of bank deposits has been the cornerstone of financial stability and trust in banking since the Great Depression," the Saudis wrote in their statement. If the initial plan had been approved, it would also have adversely affected the IMF's reputation as a rescuer of countries in trouble.

The Europeans ignored reality, the critics of their bailout programs charged. The Argentine representative argued that Europe's politicians had been aware for years of the "delicate situation" Cyprus was in. The Cypriot government, as well as the euro zone, could have prevented the crisis from coming to a head "if decisive and sustainable actions were taken at an early stage of the crisis," the Saudis wrote.

Even the representative of Iran, a country that normally has no objection to seeing the West suffer, voiced his concerns. Lessons from similar bank crises and their harmful effects on growth "seem to have been ignored," he said critically. Cyprus is suffering as a result, he said, as is the "credibility of the regional and global crisis management framework."

Call to Speed Up Creation of Banking Union

The assembled executive directors were not hesitant to hand out advice to Europe. The countries of the monetary union, they noted, should move forward quickly with the plan they had devised to overcome the euro crisis. The Canadian representative, for example, called on the Europeans to "move swiftly on the implementation of a banking union, a framework for bank resolution, and deeper fiscal integration."

These are all decisions that the leaders and finance ministers of the euro zone have already reached, but they are making almost no progress on implementation. The banking union has been delayed because German Finance Minister Schäuble wants to amend the European treaties first. As experience has shown, this could take years.

The European Commission's control over government finances suffers from the fact that the member states don't like to be dictated to. This was evident once again last week when French President Hollande angrily responded to reform proposals from Brussels by saying that he would not be dictated to by the Commission.

Even traditional allies on the IMF Executive Board are beginning to lose patience with the Europeans. In her manuscript Meg Lundsager, the representative of the United States, the largest IMF shareholder, called on the Europeans to proceed more quickly. To ensure that Cyprus gets its debts under control, she wrote, it will require "will require continued, strong European financial and economic support."

The Europeans' statements were meek by comparison. Spain's spokesman thanked the members of the IMF Executive Board for a "well written and comprehensive report" on the situation in Cyprus. And the representatives of Germany, France, Italy, Austria and Sweden expressed their unblinking optimism in a joint statement. "We are aware that this is a very challenging program," they wrote. Nevertheless, they added, "we are confident that the firm implementation of the program will enable the Cypriot economy to return to a sustainable growth path."

In the end, the group approved the program, as was to be expected from the very beginning, given that Europe and the United States have the largest number of votes in the IMF. 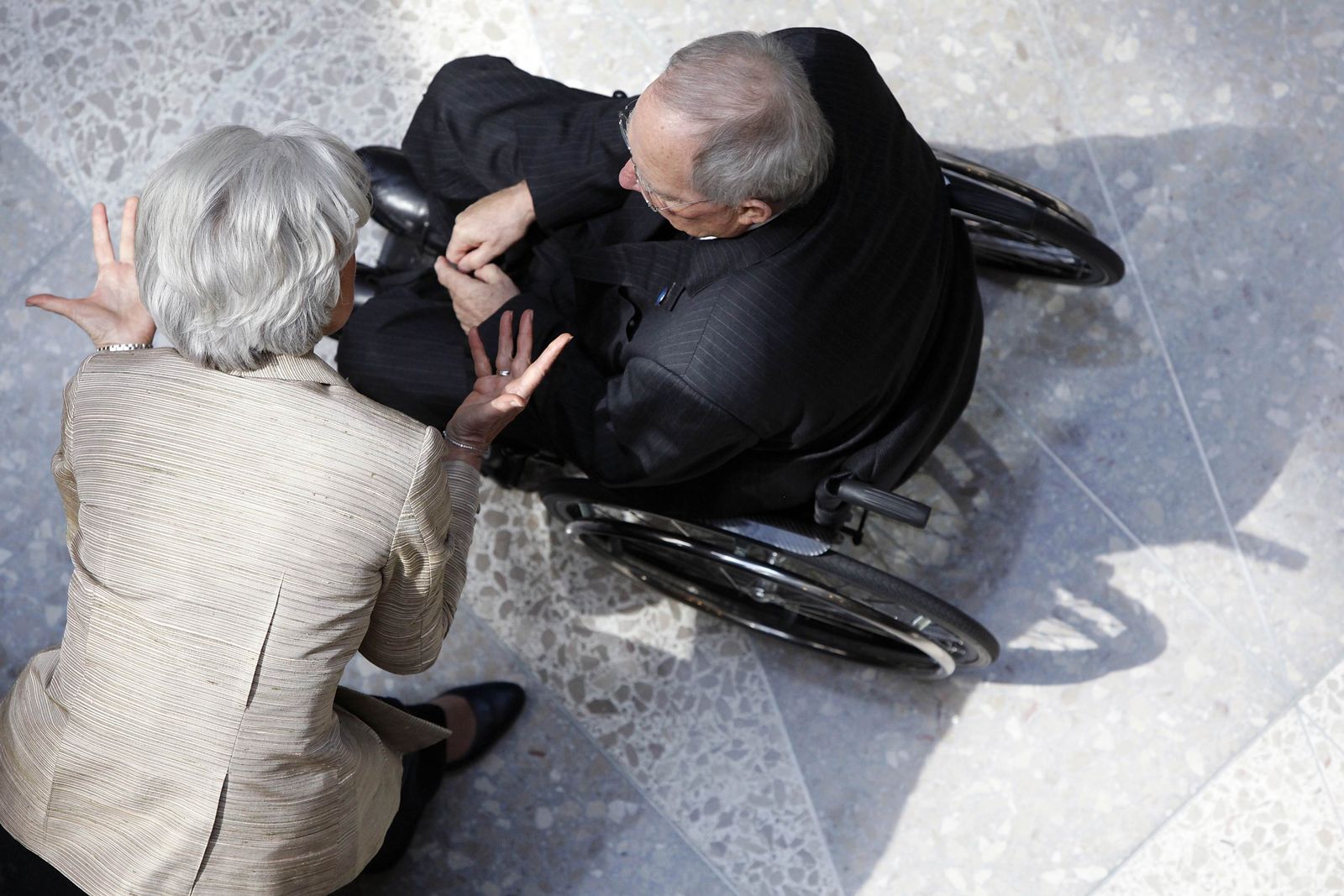