No matter where Ekrem Imamoglu goes these days, his fans await him: Women with headscarves who want to touch him, teenagers asking for a selfie. That's the case in Istanbul, where Imamoglu was elected mayor last Sunday by an overwhelming margin, but it's also true of conservative strongholds like the city of Trabzon on the Black Sea.

Videos recorded in Trabzon shortly before Imamoglu's election as mayor of Istanbul, show people celebrating him like a savior. They swing flags with this portrait, yelling: "President Ekrem!" His election song blasts from the speakers: "Her sey cok güzel olacak!" All will be good. The Imamoglu hype has swept across all of Turkey.

Up until a few months ago, Imamoglu, 49 years old, was the largely unknown mayor of Beylikdüzü, a drab district on the edge of Istanbul. But now that he has beaten President Recep Tayyip Erdogan's Justice and Development Party (AKP) candidate twice at the ballot box, he has emerged as the great hope of proponents of democracy in Turkey.

It all began on March 31, when he came in almost 14,000 votes ahead of the AKP candidate, Binali Yildirim, in the Istanbul mayoral election. Erdogan had the result annulled. When the vote was carried out a second time, Imamoglu increased his lead to more than 800,000 votes. Few politicians in Istanbul have ever achieved a better result.

For Imamoglu, it's more than local politics that are at stake now. Istanbul is the social, economic and cultural center of the country. "The person who governs Istanbul, governs Turkey," Erdogan once said. Now, many Turks see Imamoglu as their next president. From this point on, Erdogan will be fighting for his political survival.

To have a chance of landing the country's highest office, he will first have to prove himself in Istanbul's City Hall. There are few jobs in Turkey that are tougher. At least 15 million people live in greater Istanbul. Tens of thousands more move to the connurbation each year, and the city's administration is chronically overwhelmed. The city recently experienced conflicts between residents and migrants from Syria, and Turkey is mired in an economic crisis. Inflation is at 19 percent, and every fourth Turk under 25 is unemployed.

Expectations for the new mayor are enormous: He is supposed to create jobs, for which he will have to work with the central government. He is expected to improve the quality of life in Istanbul by expanding public transport, making apartment buildings earthquake-proof and taking measures to combat pollution.

Erdogan was considered an Islamist ideologue when he moved into City Hall 25 years ago. As a mayor, he proved to be a pragmatist who freed the city from garbage and improved its water system. If Imamoglu manages to govern as successfully as Erdogan, it will be impossible to deny him candidacy in the next presidential election.

As Istanbul's mayor, he can now put pressure on the government in Ankara. The opposition has frequently accused Erdogan of bestowing privileges on his favorites. Now Imamoglu is in a position to prove their accusations. Imamoglu's people already announced in May that the Istanbul city administration paid about 130 million euros to Islamic foundations partly under the control of Erdogan's relatives over the past year.

"The system of waste" is over, Imamoglu says.

His party, the Republican People's Party (CHP), will soon be governing well beyond Istanbul. In local elections in March, it won four of the five largest cities, including the capital, Ankara. According to calculations by the Istanbul think tank Edam, it is now governing in areas responsible for over two-thirds of the Turkish economy. Although Erdogan still controls state institutions, especially the judiciary, the era in which he could govern unimpeded is now over.

Imamoglu poses a threat to Erdogan because he is garnering the support not only of the secular, urban middle- and upper classes, but also pious Muslims and Kurds. In the Istanbul election, he won highly conservative districts like Fatih and Üsküdar, where Erdogan lives. Those had previously been no-go areas for CHP politicians.

Like Erdogan's family, Imamoglu comes from the Black Sea. His father was a construction entrepreneur. Imamoglu moved to Istanbul to study business administration and didn't join the CHP until late. He became the district mayor of Beylikdüzü in 2014. The CHP is the party of modern Turkey's founding father, Kemal Atatürk, and many Muslims see it as elitist and distant. Imamoglu changed this image: His mother wears a headscarf, and during the election, he had himself photographed visiting a mosque and breaking fast. He removed the conservatives' fear that, if he took power, the discrimination of the pre-Erdogan period would resume.

"The era of partisanship is over," he said after his victory. "The era of law and fairness has begun."

For a long time, Erdogan was able to rely on his political instincts. His decision to have the Istanbul election repeated, however, might nevertheless be one of the most consequential mistakes of his career. He turned Imamoglu into a resonant figure by giving him something worth more than any campaign funds: a story. Imamoglu is now known as a man who won an election despite having been accused of cheating for dubious reasons.

Erdogan once campaigned as an outsider against the establishment. The regime in the 1990s turned him into a martyr by having him arrested. By voiding the results of the Istanbul election, however, he has reversed the roles: Now, Erdogan is suddenly the powerful one unfairly keeping his competitor down, and Imamoglu is the victim. In a country like Turkey that always sympathized with underdogs, these roles are important. Essentially, Imamoglu is the new Erdogan.

The president is now facing a reinvigorated opposition, and he is no longer as uncontroversial within his own party as he once was. After the election, AKP politicians began criticizing him more publicly than ever. "We lost Istanbul because we forfeited our moral superiority," tweeted AKP lawmaker Mustafa Yeneroglu. In off-the-record background interviews, members of the government were more assertive. "Erdogan's time is clearly over. He has no idea anymore how he can bring the country forward. We need a fresh start," one cabinet member told DER SPIEGEL.

Observers believe the AKP could split as soon as the next few weeks. In the past, there have often been rumors that high-ranking AKP politicians were preparing a break with Erdogan. Now, these plans seem to be taking concrete shape.

Sources in Ankara have stated that Ali Babacan, an AKP co-founder and former economics minister, could announce the formation of a new party as early as July. Sources close to the president told DER SPIEGEL that Babacan personally informed Erdogan about his plans before the Istanbul election. Former President Abdullah Gül reportedly supports Babacan, but isn't planning to seek office himself. And former Prime Minister Ahmet Davutoglu is also reported to have frustrated AKP members swarming around him.

It remains unclear how many AKP lawmakers would join Babacan or Davutoglu, and whether Erdogan could lose his majority in parliament as a result. Erdogan's opponents are already discussing scenarios in which they could push Erdogan out of power.

After that, the three opposition parties -- CHP, lyi and HDP -- would have to join forces, together with parts of the AKP, to pass a parliamentary resolution to hold a new referendum on the presidential system. Erdogan had secured extensive powers in the 2017 referendum that many lawmakers would like to reverse.

The plan is a risky one. It assumes that parties until now considered to be rivals would cooperate in a disciplined way. But constitutional experts believe a referendum is the only way to get rid of the president because the next presidential election otherwise won't take place until 2023. If Erdogan lost such a vote, he would still be president, but he would lose much of his power. New elections would then be inevitable.

Erdogan has often managed to reinvent himself in crisis situations. It's possible he will change tack this time and compromise with his opponents. This would mean asking for help from the International Monetary Fund to help resolve the economic crisis, working to reconcile with Western partners like Germany and the United States and setting political prisoners like former HDP Head Selahatin Demirtas or philanthropist Osman Kavala free. In his first speech after the Istanbul election, the president presented himself as comparatively conciliatory.

It's more likely that Erdogan, pushed by his right-wing extremist coalition partners, the MHP, will continue to escalate the situation. Since the 2013 Gezi protests at the latest, Erdogan has ruled through intimidation. Ever since, he has posed his citizens with a choice: You can choose either me or chaos.

His problem now is that, since Sunday, there is another alternative: Ekrem Imamoglu. 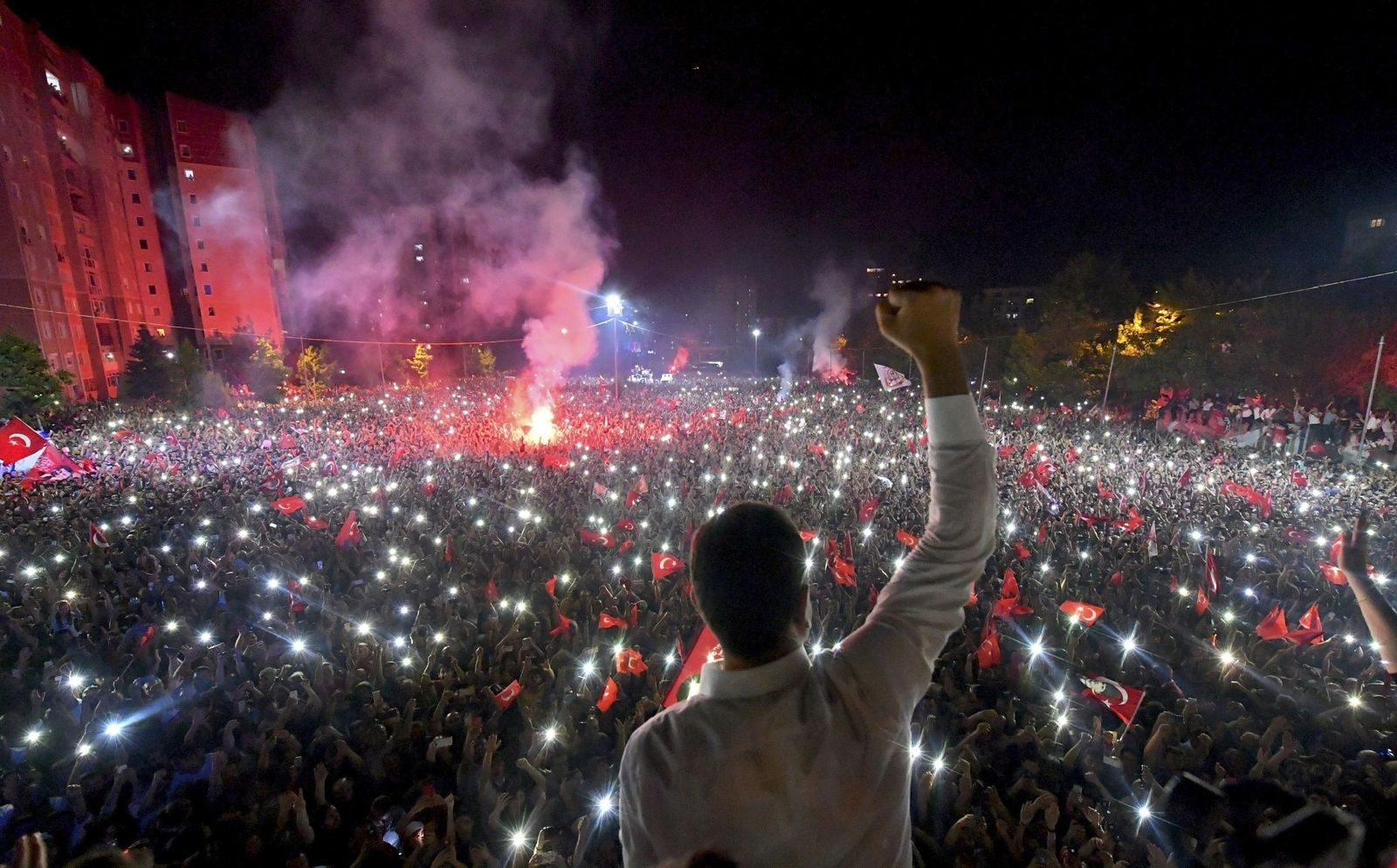