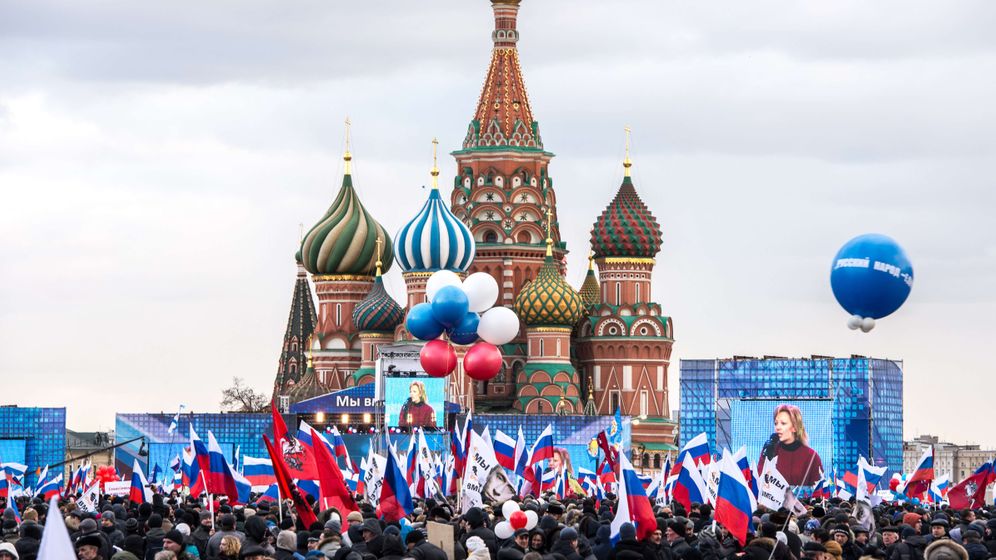 Photo Gallery: A Country in Lockstep

Perhaps Alexander Byvshev was a little naïve. Maybe he thought his small village was somehow a safe haven from the world of global politics. But how wrong he was.

Byvshev, a German teacher in the district of Orlov, recently opened up his local newspaper, Sarya, or "the dawn," only to find his name featured in a prominent slot. "In these troubled times, when enemies outside the country are showing their teeth and preparing to take the leap of death, you can find people who would like to undermine Russia from within," the newspaper wrote. "People like A. Byvshev."

How did Byvshev wind up in the newspaper? All it took was a short poem he wrote and posted on VK, Russia's popular social network answer to Facebook. He had directed the poem at "patriot cheerleaders" who uncritically follow Moscow's propaganda. "From a very early age, I have been accustomed to not telling lies," Byvshev says. "If Russia stole Crimea from Ukraine, then one has to speak openly about the fact that it was theft."

It's an openness that hasn't done him much good recently. "There's No Place for Patriots Like This in Russia," blared the headline of the article about Byvshev. Acquaintances stopped greeting him, local businesses began ignoring his presence and now the local regional prosecutor is threatening to press charges against him for "incitement to hatred." He faces two years behind bars if convicted.

It is an incident reminiscent of the 1930s, an era when the line between Communist and public enemy was a fine one. At the time, Stalin had hundreds of thousands of so-called enemies of the people shot and killed.

Today, Moscow's territorial claims in Ukraine have unleashed a sense of nationalism so aggressive that it has silenced virtually all critical voices. Indeed, it is a singular official view that appears to have prevailed in Russia -- namely that a clique in Kiev, with American support, is seeking to destroy Ukraine despite heroic efforts by millions in the eastern part of the country. And that these people need Russia's support.

The ability to differentiate appears to have evaporated and the state propaganda machine has become as effective as it is comprehensive. The media seem to be following it in lockstep, as evidenced last week. "Ukraine Is Waging War against Its Own People" read the front page of one issue of Rossiyskaya Gazeta, the official Russian government newspaper, in response to the decision by the interim government early last week to send troops to the eastern part of the country. The "Kiev junta" wants to "bombard the Donbas," commented Russia's largest-circulation daily, Komsomolskaya Pravda, adding: "Our people are mourning the dead and injured." "Sloviansk is covered in blood," claimed the tabloid Tyov Den ("Your Day"). None of these reports is true.

The problem is that people in Russia these days seem to believe almost every false report that comes out of Moscow, and few are questioning their accuracy. New channel Russia 24 unceasingly shows Ukrainians in the eastern part of the country holding machine guns and grenade launchers. But nobody in Russia bothers to ask where they are getting their arms from.

Russian President Vladimir Putin, the man ostensibly rushing to the aid of Russians in Ukraine, is the hero of the day. Finally, Russians seem to believe, he is paying the West back for years of humiliation. And yet the justifications Putin has provided could hardly be more cynical.

Last Wednesday, Putin declared the escalation of the crisis in eastern Ukraine to be the product of the "irresponsible and unconstitutional policies of the regime in Kiev," which, he claimed had used the army to suppress the protests of peaceful citizens in the region. Yet to that point, there had been little activity by the army. During the Maidan square revolt, he called for the exact opposite: Putin said the military must use force to stop the protests.

Moscow is acting as though it were located just behind the front lines. Indeed, the pull of nationalist delirium has become so strong that even Putin's own opponents seem no longer capable of resisting it.

Only two years ago, Sergei Udaltsov, along with blogger and opposition politician Alexei Navalny, was one of the most eloquent speakers at anti-Putin protests in Moscow. He has been under house arrest since 2013 on charges he sought to incite mass riots. Despite his situation, even Udaltsov has declared his support for Russia's actions and its annexation of Crimea. "I am a supporter of direct democracy, and I welcome the Crimea referendum as an expression of popular government," he recently stated.

Blogger and attorney Navalny has also been placed under house arrest and is banned from using the telephone or the Internet. That didn't stop him from writing an interview with himself, which was then distributed by his family. In it, he claims that Crimea was given to Ukraine in an act of "unlawful arbitrariness" by Soviet leader Nikita Khrushchev in 1954 that is still offensive today, even to normal Russians. He also offers some pseudo consolation to Ukrainians: "To hell with Crimea. Why do you need it, anyway?"

At a time when polls indicate that 80 percent of Russians are backing their president, it is difficult to be both a patriot and a critic of the Kremlin. Those who would criticize the government become the object of close scrutiny. The annexation of Crimea and the battle for eastern Ukraine has divided not only Putin's opponents, it seems, but also Russia's intelligentsia.

On the one side, around 500 members of the Russian creative community recently signed a letter in support of Putin, including star conductor Valery Gergiev. On the other, authors Victor Erofeyev and Lyudmila Ulitskay, along with 900 other artists, signed their names to a petition condemning the annexation and warning against a possible war with Ukraine.

Sitting in her office in a historical building in central Moscow, Irina Prokhorova, chairwoman of the opposition party Civic Platform, laments the current situation. "It's almost as if we've returned to the Soviet era," she says, "a time when all discussions about government decisions were prohibited." The building belongs to her brother Mikhail, a billionaire who ran for president in 2012 on a platform of ensuring greater democracy and a stronger free market economy. He ultimately garnered 8 percent of the vote, a respectable result.

Prokhorova sees in the enthusiasm over the annexation of Crimea a "nostalgic return to the imperialist past." "Earlier, people with differing political convictions had mutual respect for each other," she says. "But now even friendships are breaking up. A witch hunt has begun." She warns that Russia is steering itself on a course toward a "civil cold war."

Reknowned historian Andrey Zubov, until recently a professor at Russia's elite MGIMO foreign policy university, experienced that first hand not long ago. Zubov got dismissed from his professorship earlier this month after comparing Putin's annexation of Crimea with Hitler's 1938 Anschluss of Austria. Fervent Russian patriots also want to strip the country's most famous rock star, Andrey Makarevich, of all honors ever bestowed him because he dared to protest against the Kremlin's Ukraine policies.

Other intellectuals, like former television executive Nikolai Svanidze, are more cautious and view themselves not as members of the opposition, but as a "liberal and democratic part of the political elite." Although Svanidze considers Crimea to be Russian territory, he rejects the methods used to annex it as well as the actions of forces in eastern Ukraine he believes are steered by Russia. He says he now fears the creation of an "Iron Curtain Lite," the "archaization and Sovietization of our domestic politics" and major economic problems in the mid-term.

A few newspapers do still throw light on the thoughts of the liberal wing of the Moscow elite, despite their current silence. And the Kremlin still tolerates their existence -- no doubt due to their low circulations.

Articles printed in Nezavisimaya Gazeta openly state that the majority of Ukrainians are opposed to annexation by Russia -- even in Donetsk in eastern Ukraine -- and that militant forces there are receiving their orders from Russians who have traveled into the region. They have also run stories on how so-called civil defense forces somehow managed to open several weapons depots. And that they were miraculously able to disarm the 25th Separate Dnipropetrovsk Airborne Brigade and now possess tanks, armored personnel carriers, artillery and all sorts of ammunition.

The views published in the daily Vedomosti are even more vehemently critical of Kremlin policy. The newspaper, owned by a major Russian media company, was founded in 1866. In recent months, it has become the spiritual home of critical intellectuals.

Vedomosti doesn't follow any ideology and isn't financed by any political party or oligarch. The newspaper largely covers business and economics and it is read by virtually every political camp because of the market reports.

What sets the newspaper apart, however, is the fact that it can afford its own staff of columnists, which includes historians, philologists and theologians who sit in a glass-walled office at the center of the editorial offices. They are surrounded by bookshelves that include the Bible, English-language encyclopedias and even the works of forgotten Russian anarchists. This glass box is one of the few places in Russia where Kremlin politics are still commented on each day in an intelligent and uncensored manner.

During Soviet times, everyone knew that official statements were propaganda, Epple says. People would just laugh and joke about them with friends behind closed doors. "But now many believe the reports coming out of Ukraine -- and that is dangerous," he warns. "It gives you the feeling that something terrible is happening in modern-day Russia."

Epple just finished writing an editorial about the "special path" that Russia pursued time and again in the past. "Russia's drift away from Europe that has been happening since the 1990s has once again turned us into an island civilization," he argues. Epple says the Kremlin believes its job has less to do with communicating with the rest of the world and more with holding together its area of power from alleged attacks by foreign enemies. "He's trying to create another Cordon sanitaire," he explains. "And he is surrounding himself with areas that are ailing economically or are torn apart by ethnic conflicts."

Despite editorials in that vein, there hasn't been any public pressure exerted on his newspaper, the journalist says. "Still, the atmosphere is getting more ominous. It already takes some courage to write that Kiev's new leaders aren't fascists. I wonder each day of there is anyone who is capable of putting the brakes on the hysteria in our country?"