"The people have spoken and now the situation is clearer and more complicated." That was the assessment of Artur Mas, leader of the Catalonian separatist party Convergence and Union (CiU), after the votes were counted following weekend elections in the north-eastern Spanish region. A glance at the results makes it difficult to argue.

On the one hand, it is clear that a majority of voters in the region, which includes Spain's second-largest city of Barcelona, would like to see a referendum held on independence. But they disagree on which separatist party is best equipped to run the region. In total, almost two-thirds of the seats in regional parliament were won by political parties that are in favor of a referendum on the region's secession from Spain. But the 87 seats went to four different secessionist parties, with the two largest, CiU and the Republican Left, bitterly opposed to each other.

As such, for any referendum to go forward, the two parties would likely have to form a coalition. But that doesn't seem possible for the moment. Indeed, even analysts seemed confused by the vote's outcome. "Right now, we are not sure about the state of the Catalan independence process," Angel Rivero Rodriguez, a political science professor at the Autonomous University in Madrid, told the Associated Press. "We don't know if this new situation is going to accelerate the process or hide it again indefinitely."

The vote took place against the looming backdrop of Spain's economic woes and financial uncertainty. Unemployment in the country is at 25 percent and Catalonia had long been one of the country's most economically successful regions. Indeed, the secessionist movement has been fuelled by a feeling in Catalonia that it pays more in taxes to Madrid than it receives in government services. In addition, money from rich regions in Spain is distributed to poorer regions in a system that some deem to be unfair. More recently, however, Catalonia has gone deeply into debt and needed a €5.4 billion bailout from Madrid not long ago.

CiU leader Mas, who is also head of the regional government, has pursued a course of austerity in recent months, which has hurt his popularity. While his party won 50 seats in the 135 member Catalonian legislature, it lost 12 seats from the last election. The central government in Madrid has been adamantly opposed to the separatist movement and there is some doubt about its legality under the Spanish constitution.

German commentators take a closer look at the election result on Tuesday.

"The main reason for the collapse in support for Mas' party is not the rigid austerity program that he introduced two years ago to reduce the mountain of debt he inherited from his center-left predecessors. Rather, his voters were afraid of the Europe question: Would Catalonia have to leave the European Union and the euro zone were it to become independent? Mas didn't have a clear answer to that question."

"Spanish Prime Minister Mariano Rajoy, however, did have an answer. He would like to block independence for Catalonia, a region with both tourism and industry…. The horror scenario he painted for an independent Catalonia proved to be quite useful. He said that the region would suffer an economic collapse outside of the EU and the middle class would slide into poverty. And Rajoy was supported by European Commission President José Manuel Barroso, who stated clearly that every new state must go through the same EU accession process."

"Mas found no answer to this Europe dilemma, particularly given the complete lack of support from European leaders for his march to independence. And the overwhelming majority of Catalonians, even if they want to secede from Spain, want to remain a part of the EU."

"The vote in Catalonia does not do anything to deflate the independence debate. Radical powers were strengthened and the fragmentation of the political landscape was not stopped. Mas lost, a result of his austerity policies. But any effort to form a coalition with the Republican Left will have to include a secessionist plank. As such, Rajoy's Catalonian headache has not disappeared. And the EU's headache remains as well."

"After the populist noisemaking in recent weeks, it is time for Catalonian politicians to return to economic reality. "Back to the beginning," should be the motto. The trigger for the escalation between Madrid and Barcelona were Catalonian demands for a reform of the model according to which rich Spanish states like Catalonia transfer money to poor Spanish states. It was only after the categorical 'no' from Rajoy that regional leader Mas plunged into the secessionist debate."

"There is broad consensus in Spain that a fundamental reform of the system … is necessary. But such a reform is difficult to push through in the middle of a euro-debt crisis in which regional and central governments are fighting for every tenth of a percent in the ratio of budget deficit to gross domestic product."

"On the day after elections in Catalonia, it was clear that the divide which runs through Spain is deeper than ever before. At first glance, it looked as though Catalonian leader Artur Mas was punished for his push for independence, as though the voters, in their fear of being pushed out of the European Union, had opted for moderation. The election results, however, demonstrate the opposite. Radicalization has increased on both sides."

"Mas acted irresponsibly. He was never a trailblazer on the path to Catalonian independence, but he nevertheless wanted to push through a revolution in just two months -- primarily in order to distract attention from his terrible crisis management. It has become something of a pattern in poor Spain." 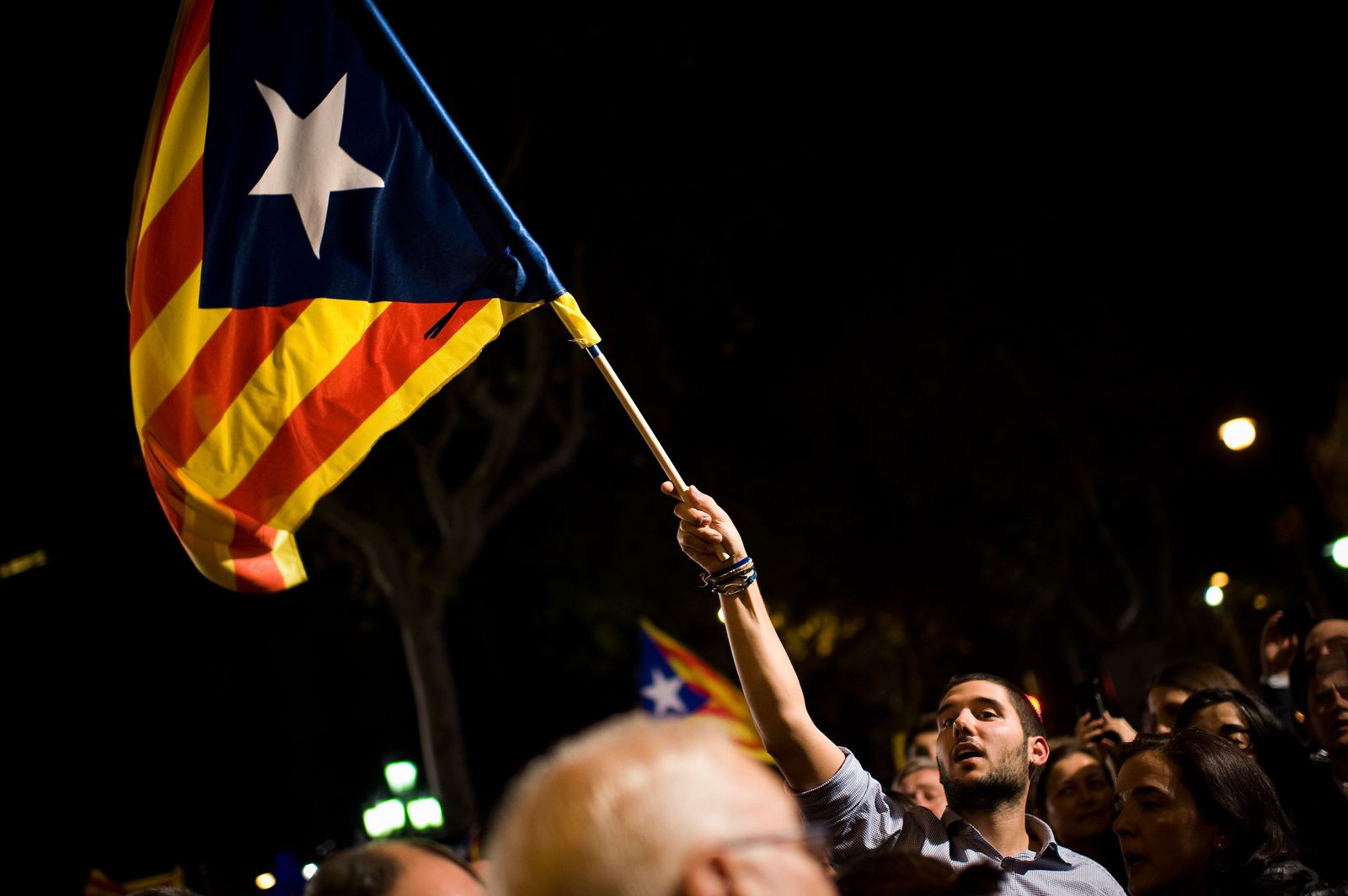 A man in Barcelona waving a flag for independence.