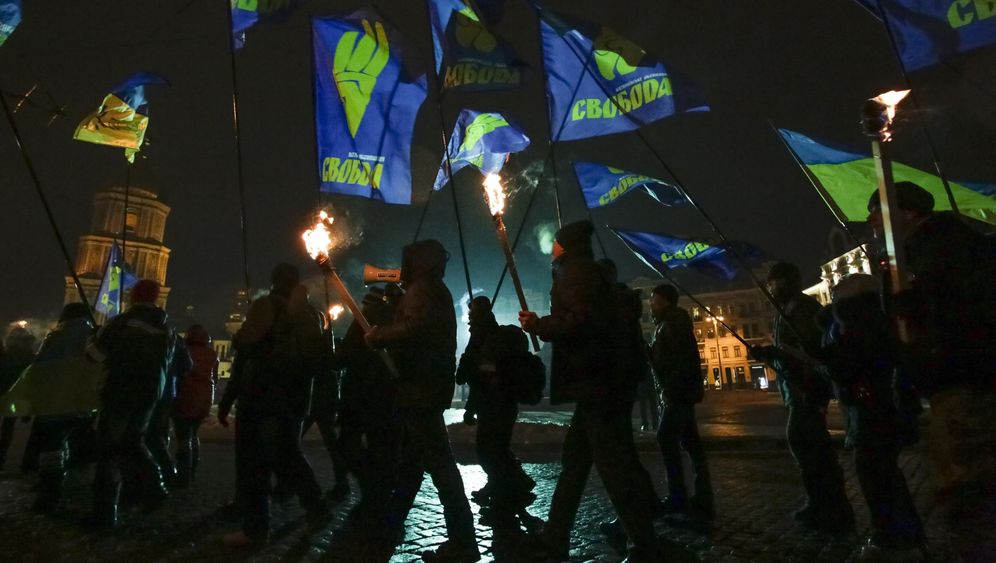 When Holger Apfel showed up at the Saxony state parliament with a "parliamentary delegation" from Ukraine last May, few had even heard of a party called Svoboda. Apfel, who was head of the right-wing extremist National Democratic Party of Germany (NPD) at the time, proudly showed his guests -- Ukrainian parliamentarian Mikhail Golovko and two municipal politicians from the Ukrainian city of Ternopol -- around the parliament building in Dresden.

Speaking to other NPD parliamentarians, Apfel called the nationalist Svoboda party "one of the most important European right-wing parties."

With a view to approaching elections for the European Parliament Apfel added that an "opposing model to the EU dictatorship of Brussels Eurocrats" must be established and said that EU officials were nothing but "willing helpers to international capital." Svoboda, he exulted following the visit, is part of the "phalanx of patriotic powers" and encouraged the "intensification of cooperation." Apfel's Ukrainian guests agreed, saying that collaboration between the NPD and Svoboda should be expanded.

Given such ties, it is astounding that Germany has approached the Ukrainian right-wing extremists in a manner that would be unthinkable with the NPD. On April 29, 2013, for example, Germany's ambassador in Kiev met with Svoboda's parliamentary floor leader Oleh Tyahnybok. During the meeting, Berlin has insisted, the ambassador exhorted Tyahnybok to respect the inviolability of human dignity and human rights.

But the Ukrainian right wing has also received instruction financed by German taxpayers. Party members appeared at events hosted by the Konrad Adenauer Stiftung, the German political foundation affiliated with Chancellor Angela Merkel's conservatives. Examples include the conference entitled "Lessons from the 2012 Parliamentary Elections," the seminar series called "The Higher School of Politics" and a discussion on the 2012 elections.

Even the German Society for International Cooperation (GIZ) has supported the party. GIZ oversaw a project for the "formation of administrative capacities in the public financing sector." Svoboda parliamentarians took part in two trips to Berlin in 2013 in conjunction with the project.

One prominent party member even gave an interview in early May 2013 to the NPD publication Deutsche Stimme. In an interview conducted by senior NPD member Jens Pühse, Ternopol Mayor Sergei Nadal was asked why Svoboda supports the recognition of descendants of former members of the Ukrainian 14th Division of the Waffen SS as national heroes. "These Ukrainian heroes must be honored irrespective of what has been written about them in the history books of those peoples who were once our enemies," Nadal answered.

Germany's Interior Ministry has also taken note of the Svoboda-NPD connection. In response to a parliamentary query from the Left Party, the ministry noted that the NPD had established a department tasked with maintaining contact with right-wing extremist organizations in Eastern Europe. The German government, the ministry said, considers Svoboda to be a "right-wing populist and nationalist party" which represents "in part right-wing extremist positions." The party, for example, organized a rally to mark the 70th anniversary of the founding of the 14th Waffen SS Division.

Svoboda, meanwhile, has established chapters in Frankfurt, Cologne and Munich. The Anti-Fascist Information Center in Munich noted recently that in August of last year, some 40 participants gathered in a Catholic parish hall to elect a Munich student of Ukrainian descent as their chairman.