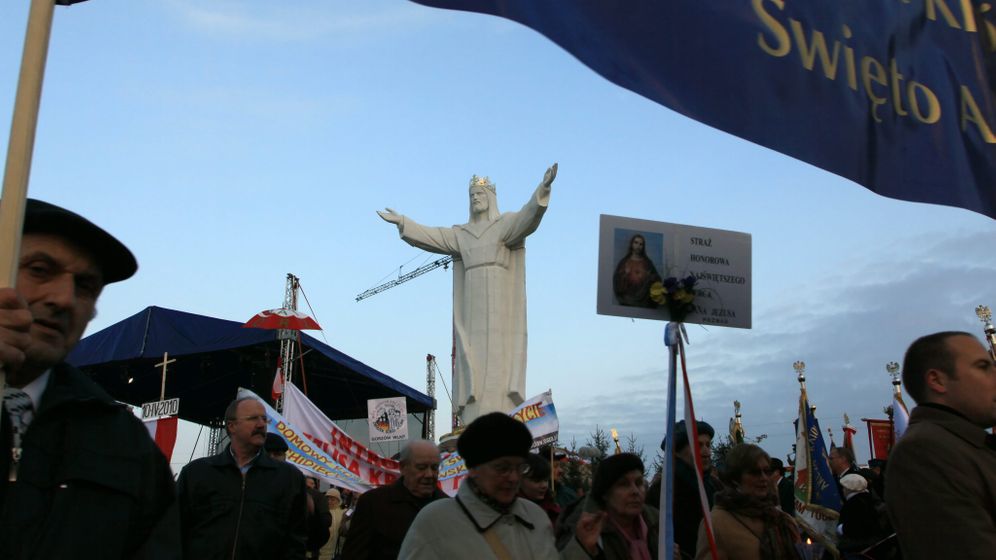 Just past the Polish border, passengers traveling by train from Berlin to Warsaw can see Jesus. He is 36-meters (118 feet) tall, made of concrete, and towers over the surrounding fields near the town of Swiebodzin, a gilded crown perched nobly on his head. His gaze is directed over the Recaro plant, which makes car seats and is the region's biggest employer, and toward the setting sun. His outstretched arms seem to suggest that he wishes to take the Western heathens into his heart.

The plaque at the base of the giant religious statue says that Jesus Christ is the true king of Poland and will rule for eternity. It is not for nothing that the country is, in the eyes of the church at least, Europe's most Catholic nation.

Yet despite the monumental redeemer, Swiebodzin has not become a pilgrimage site. "The statue has not triggered a tourism boom yet," confirms Waldemar Roszczuk, editor-in-chief of the city's newspaper and publisher of a regional Internet publication.

Much to the annoyance of Father Sylwester Zawadzki, who is responsible for the socialist-realist version of Christ. That, in any case, is what Roszczuk reports. Christ's realm is not necessarily of this world, he says, at least in Swiebodzin.

"The majority of the population is against this monument, but no one says so openly," he says. Most locals, he suggests, are concerned about the baptism or first communion of their children and "would rather not spoil things with Father Zawadzki."

Some 95 percent of all Poles still say that they are Catholic. Yet loyalty to the church is waning. Even the conservative Catholic publicist Tomasz Terlikowski estimates the true number of devout Catholics at little more than 20 percent. "We Poles like to proclaim our Catholicism," he says, but the reality looks quite different.

Only slightly more than 44 percent of young people say they go to church on Sundays, compared with 62 percent in 1992. Forty-two percent admit that they do not observe all religious commandments. Hardly anyone pays attention to rules about things like sexual abstinence before marriage anymore. The number of illegal abortions runs into the hundreds of thousands every year. In addition, four-fifths of Poles are bothered by the fact that the church regularly intervenes in politics.

"With a bombastic monument like the one in Swiebodzin, local church leaders are merely trying to conceal the fact that their influence is in fact declining," says Tadeusz Barto. "The church could be completely marginalized within 10 years," says Barto, who holds a doctorate in philosophy and was once a monk.

It is a development that stands in stark contrast to the unique role the Catholic Church as long played in Poland -- as a kind of protector of the nation. This relationship dates back to the time when Poland was partitioned. In the 18th century, Protestant Prussia, the Orthodox Russian Empire and Austria divided up the old aristocratic republic amongst themselves. The Catholic faith served as the glue binding together Poles in the divided regions, and the church kept the idea of reunification alive.

That dream only materialized between the two world wars. The so-called Second Republic was a multi-religious entity that consisted of Jews, Protestants and Orthodox Christians -- and only about 60 percent Catholics. Ironically, it wasn't until the Communist People's Republic was established after 1945, with the help of Josef Stalin, the renegade son of a priest, that Poland became almost exclusively Catholic. The Protestant Germans were driven out after the Nazi occupiers had almost completely exterminated the Jewish population.

Until 1989, the church portrayed itself as a national bulwark against communism, which was perceived as "un-Polish." It helped organize the resistance movement among dockworkers in the 1970s and '80s, it offered dissidents protection and it produced a modern martyr, Jerzy Popieluszko.

A Catholic priest who was associated with the Solidarity trade union and a confidante of strike leader Lech Walesa, Popieluszko was kidnapped and beaten by the secret police in 1984. He was bound and thrown into a Vistula River reservoir, where he was later found dead.

Failed to Keep Up

After the fall of communism, politicians of all stripes were careful not to lock horns with the Catholic leadership. The church was given priority when it came to returning expropriated property, the episcopate received favorable tax treatment and religion was reinstated as a required subject in schools.

Still, the church has failed to keep up with the modern age, says Barto. Many of his fellow Poles agree.

After joining the European Union, Poland turned to the West and embraced the Western lifestyle more than almost any other country. Nowadays, Polish women dream of careers, self-fulfillment and children. Hundreds of thousands of young Poles live together without being married. In booming cities like Warsaw and Poznan, gays and lesbians live their lives as openly as in Berlin or Madrid.

"More and more taboos are falling by the wayside. But the church reacts by hardening its positions even further," says Barto.

He experienced this stubbornness himself. He joined the Dominican Order at 19 and was ordained as a priest. But then he became a contrarian, writing for the daily newspaper Gazeta Wyborcza, which is considered hostile to the church. He believes that the church must break open its hierarchies and soften its dogmatic positions. The Poles made great sacrifices when they shook off communism and introduced the market economy, says Barto, but not so that they could now allow quixotic clerics to tell them what to do.

In many instances, mandatory celibacy for priests has become a sham. "Nowadays, even truly religious Poles think it's ridiculous that priests are still disguising their concubines as housekeepers," says Barto.

The contrarian monk removed his robes in 2007. Today, he gives lectures at the University of Warsaw and lives in a carefully renovated house in the upscale neighborhood of Saska Kepa. "The Poles are becoming more courageous and are no longer holding back with their criticism of the clergy," he says.

Janusz Palikot and his party are the political beneficiaries of this discontent. The political up-and-comer, akin to Pirate Party politicians in other European countries, promptly captured 10 percent of votes in the last election. He benefits mostly from the fact that the church is trying to retain its dominant role, especially in politics.

One recent example was provided by the controversial burial of former President Lech Kaczynski in Wawel Castle in Krakow after he died in the horrific 2010 plane crash. The castle is a kind of Polish Valhalla, where kings and heroes of the independence movement are buried. Many feel it is not the right place for a recent president with only a modest list of achievements while in office -- and voters flocked to Palikot's party as a result.

A series of suicides among priests has also dealt a disastrous blow to the image of the church. In the last six years, eight priests have taken poison, hanged themselves or jumped out a window in the deeply religious Tarnow Diocese in the country's far south. The last suicide occurred at the end of April, in Stary Sacz. The church hierarchy, it would seem, is no longer capable of addressing the spiritual needs of its own priests.

The church is short on answers to the challenges it faces in booming Poland. The priests routinely react to job market volatility and long working hours, emigration and return, stress and careers by invoking earlier, more pious times.

"In reality," says former monk Barto, "most clergymen are preoccupied with internal power struggles. If there is anyone who is especially ill-suited to teaching people ethical behavior, it's a scheming church leader."