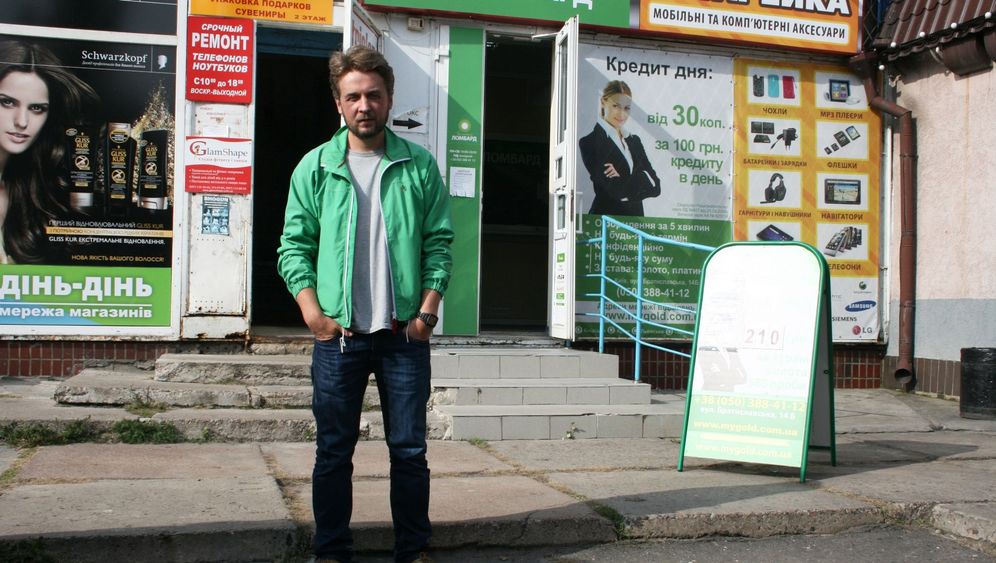 SPIEGEL: Mr. Svyatski, why did you flee Ukraine at the end of last week?

Svyatski: I was twice beaten by unknown assailants. Then at the end of August, the police also planted weapons in the Femen office in Kiev as well as leaflets showing Russian president Vladimir Putin and Patriarch Kirill, the head of the Russian Orthodox Church, in crosshairs ... So I went into hiding and decided to request asylum in a western European country.

SPIEGEL: Who is behind the attacks on you and Femen?

Svyatski: I regard it as an act of revenge on the part of the Russian intelligence services. At the Hanover conference in April, female Femen activists rushed up to Putin, half-naked as usual. He let it be known afterwards that he had enjoyed the protest, but actually he was furious about the public humiliation.

SPIEGEL: What does that have to do with Ukraine, which is its own country?

Svyatski: It is an enclave of Putin.

SPIEGEL: How, then, can Ukrainian president Viktor Yanukovych say that he wants to bring his country closer to Europe, by which he means further away from Russia?

Svyatski: That is only for show. We are a vassal state controlled by the Kremlin, in which the Russian intelligence services operate unhindered.

SPIEGEL: You yourself have been criticized thanks to a documentary film about Femen. You are said to have dominated the feminist group in macho style and as the group's idealogue.

Svyatski: The director Kitty Green came from Australia. Together we planned how we could make her film more interesting. Kitty suggested to me: 'Victor, in the film you are the tyrant, and the girls fear you.' At the end, the girls would then free themselves from me. That's how it was filmed in the end as well. But I am not as bad as in this plot.

SPIEGEL: But you are nonetheless the strongman behind Femen -- until now you picked the women and planned the performances.

Svyatski: I have always done that together with the three Femen founders, in close coordination. They have known me for years from my home town Khmelnytskyi. Femen is a group effort; I am no tyrant.

SPIEGEL: There are other accusations against the group -- you are said to have cooperated with the Ukrainian government. The head of the presidential administration pushed for women from Femen to call in as guests on a talk show to make their point.

Svyatski: The call may have happened, and it can be that the head of the administration liked our protests. There is no accord, however. No one has ever bought us. We use every opportunity to appear in the media. We can't control who invites us onto talk shows and why any more than we can control the weather.

Svyatski: Why should we? Simply because she is a woman? In her time in office, Tymoshenko was a man wearing a skirt. Most Ukrainians view her as being as bad as the current president, Yanukovych. When she had power, corruption was as rife as it is today. But the West thinks she is a martyr only because she is in prison.

SPIEGEL: Why is Femen less popular in Ukraine than in the West?

Svyatski: Because most people here do not care about politics. We have created a global movement, a new feminism. It's just as important as Nelson Mandela's fight against Apartheid.

SPIEGEL: What do you mean by a new feminism?

Svyatski: The way old feminism worked was that women wore grey jumpers and let their armpit hair grow. Somehow they wanted to be like men in this way. The new feminism says: It is good that women are different from men. The woman is beautiful; her breasts are a symbol of femininity. That's why the women from Femen go topless on the streets. Only through differentiation can we truly reach equality.

SPIEGEL: All of the female founders have in the meantime fled Ukraine -- so how can it continue?

Svyatski: The new headquarters is Paris. From there, Femen girls will be recruited from all over the world. Femen is like the Foreign Legion in that it can strike anywhere. In Ukraine, Femen will send foreign women who will be better protected thanks to their passports.

SPIEGEL: Are you still a part of Femen?

Svyatski: No. I have already done everything in my power. Femen has already shaken off a small patriarchy, namely me. Now the women will fight on against the big patriarchy.