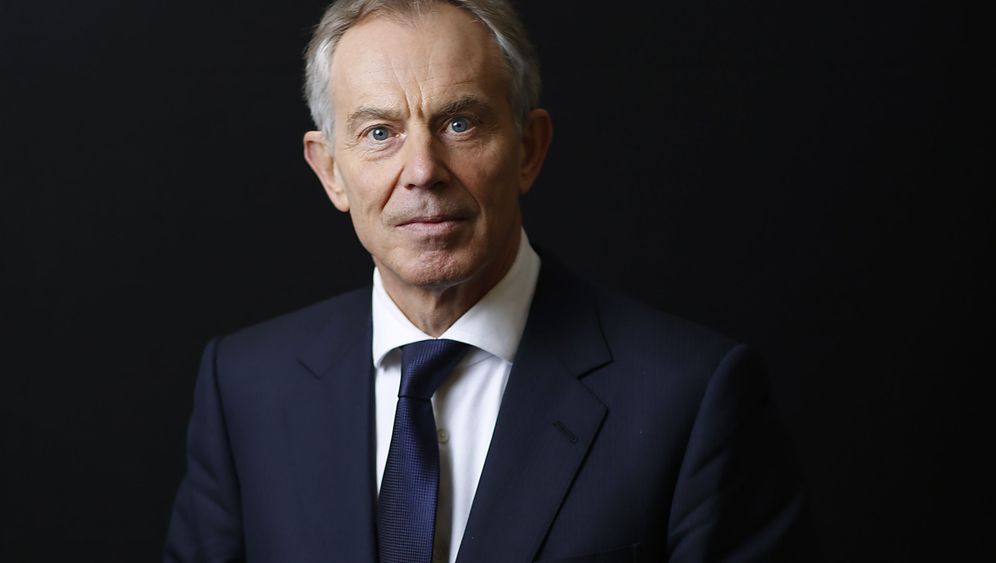 SPIEGEL: Mr. Blair, Prime Minister David Cameron would like to achieve better conditions for the United Kingdom in the European Union and has announced a referendum on the UK's membership for 2017. What concessions should Europe and German Chancellor Angela Merkel make?

Blair: I wouldn't look at it like concessions at all. The part of David Cameron's speech I completely agree with is where he talks about the need for reform and change in Europe. This is clear and right. Europe's got a huge competitive challenge, and it's a case that successive British prime ministers have made, including myself. Chancellor Merkel would be an ally on these questions. The part of Cameron's speech that is a problem is not the bit about Europe, it is the point about the British relationship with Europe. I have difficulties with the notion that we commit now to putting a referendum question with an out option. We put into play the issue of whether Britain exits the European Union. That's a quite separate and different question from whether Europe reforms or not.

SPIEGEL: Isn't that a very convenient position for Britain to be in? Every time Cameron is dissatisfied with Europe, he can threaten to leave the club.

Blair: Yes, but if you believe as I believe that Britain leaving Europe would be very bad for Britain, then it's a threat that is to do yourself damage. In circumstances where you have only one member state against you, you risk that people say, well, go ahead and leave. The vital question here is whether this is about the direction of the 27 or is it one versus 26. We in Britain should play an important part in shaping this new Europe. What happens in these discussions during the euro-zone crisis is dramatically important to my country as well as to your country. We should play our full part in that, and we should do that without putting in jeopardy our fundamental membership of the European Union. The likelihood is that David Cameron will put forward the case for certain reforms, he will probably get certain agreed, he will not get all agreed, which would not be surprising in my experience in European negotiations. Where does that leave you? Does that leave you then only with the out option? It is not good for Britain, never mind if it's good for Europe, for us to question our membership in the EU -- and then leave that question hanging there for what could be four or five years.

SPIEGEL: How should Europe react?

Blair: I think Europe should react by dealing with the reform case on its merits. When Cameron talks about the need for reform, he'll have a lot of support in that. The euro-zone crisis in many ways has exposed the need for reform; it hasn't actually created it, that need for reform was there anyway. Whether you're talking about pensions in Italy or labor market reform in Spain -- these are changes that in any event should happen. So I'm sure the rest of Europe will deal with this, but I don't think it will give us additional negotiating strength to say, well, if you don't give us what we want, we're off. You've got to be very careful with this argument, because Europe will resent it.

SPIEGEL: Still, there's a lively debate going on in Britain about the European Union, the likes of which Merkel and other EU leaders wouldn't dare start in their own home countries.

Blair: Yes, and that debate will go on. Whether the political leaders have it or not, the people have it. China has three times the population of the whole of the European Union, and will have the biggest economy in the world. If Britain wants weight today, we need Europe. The rationale for Europe in the 21st century is stronger than it has ever been. It is essentially about power, not about peace anymore. We won't fight each other if we don't have Europe, but we will be weaker, less powerful, with less influence. This is about the collective weight adding to and supporting our national interest. It's not about substituting Europe for your nation.

SPIEGEL: Has Europe been too preoccupied with itself in the past?

Blair: I think it is bound to be preoccupied with itself right now. The problem for Europe is very, very simple: For reasons of globalization, demography, and technology, all developed countries will have to change radically. The social model of Europe has got to reform if Europe is to remain competitive. That doesn't mean abandoning the values of the social model, but it means recognizing that the world around us has changed and we have to change with it. The issue now is to recognize that Europe is going to exist in a completely different economic and geopolitical context. It's not a left-right-issue. It's not about ideology. It's about an understanding of how fast and how much the world has changed and how we have to change to keep up with it.

SPIEGEL: Such an argument makes a British EU exit seem even stranger.

Blair: We get from Europe what we can't get on our own anymore. We're simply not big enough, but neither is Germany. Indonesia, which in time will become a very powerful country, is easily three times the size of Germany. This is the world we live in today, never mind India, Brazil and Russia. Europe gives us the ability as a medium-sized country to play a big-size role.

SPIEGEL: Where is the sudden pressure for Britain to leave the EU coming from?

Blair: I don't think there is some great desire on the part of the British people to leave Europe. There is a very strong and very vocal minority however. Basically, it's an old fashioned form of nationalism. That's what the UK Independence Party is, and it carries with it a very old fashioned set of attitudes and arguments. It's like similar to other the fringe movements all over Europe and indeed America with the Tea Party. But in the end it cannot and should not determine the country's policy.

SPIEGEL: Do you think that pro-Europeans in Britain have argued with enough passion in favor of EU membership?

Blair: One of the great myths is that the pro-Europeans do not speak up in Britain. We do!

SPIEGEL: It doesn't seem to make much of an impact.

Blair: I made a speech, Peter Mandelson made speeches, Lord Heseltine made speeches, Ken Clarke did as well. The problem in the UK is, however, a very sizeable and weighty media with anti-European positions and it is very strong and makes it quite hard.

SPIEGEL: How, then, do you get your point across?

Blair: Look, the thing most people in Britain wake up in the morning thinking about is not the European Union. It's jobs, living standards, it's mortgages, crime, health, education. So if you make a statement as dramatic as the prime minister, saying "I give you the chance to leave the European Union," you'll get a lot of publicity. A speech about Europe doesn't really make it to the front pages.

SPIEGEL: Is your Labour Party now on the defensive?

Blair: Well, that depends on whether it's sensible to leave the EU. Why would we want to raise a question mark over our membership of the European Union? Why would we do that now? Labour should argue unequivocally for Britain to stay, it will help the party to build bridges to the business community, which is important. The sensible thing to do is to argue the case for change inside Europe, build up alliances to achieve that and stay with the biggest political union and the largest business and commercial market in the world. Why would we want to be part of the debate but say, we might leave, by the way? I don't think you get more leverage by threatening to leave.

SPIEGEL: Why has Britain retreated from the European Union so far in recent years?

Blair: If there is one advantage to this debate that has been started, I think it will make people stop and think a little. Everyone gets irritated with Europe. Its institutions are difficult to deal with, it has lots of rules that irritate people. Europe is an extraordinary imaginative creation that is still in the making. Get Germans, Italians, Spanish and British talking about Europe, they'll complain as much as they praise. That's life. It doesn't mean that we should walk away from the whole thing.

SPIEGEL: Did Cameron speak for those many citizens of Europe who are fed up with Brussels?

Blair: I imagine that people on the streets in Athens, Rome or Madrid would be totally opposed to some of the changes Cameron will want to make. The problem that Europe has is that the concept of the single currency with the single market is a perfectly sensible concept. But I'm afraid in its execution there was not the proper alignment of the political desire to have a single currency with the economic decisions necessary to make it work. And that misalignment is what we are now dealing with. And we've got to deal with it in circumstances of enormous difficulty in a crisis. But I keep saying to people about Europe, you've got to take the long view. Right now, possibly for the next few years, Europe is going to face a period of great uncertainty. The measures that the European Central Bank has taken have given us some breathing space in terms of liquidity, which is why the bond yields have come down. But that didn't solve the solvency problem or the growth problem. So I still think Europe faces a great deal of challenges. But in the long term Europe will come to its feet because of the underlying rationale for it. It's the reason why there is the ASEAN Group, the African Union, Latin American countries coming together. Regional groupings make sense today. Europe should decide what it really wants to do and then focus on doing it.

SPIEGEL: Is Europe good at doing that?

Blair: No, it's not. Which is why the EU does cause irritation, anger and disagreement. But that doesn't mean that the basic idea is wrong. What Europe should do is set some very clear and very focused ambitions.

Blair: (The focus should be on) jobs, the economy, and making sure you drive through the single market in a way that allows proper subsidiarity. Making sure that we're gaining the most competitive advantage the single market could give us. In energy policy, there are enormous things we can do, around grid systems for example. Likewise immigration and crime should be about controlling our borders, controlling immigration properly and fighting crime properly. Too often, they end up a bureaucratic mess. In common foreign policy and defence there is a massive amount Europe could do if it put its mind to it. For France to go and do Mali on its own is really tough for the French. If you had a strong common (foreign) and defence policy, we could do so much more.

SPIEGEL: How do you think the referendum will turn out when it is finally held?

Blair: In the end, I believe, there is a solid majority for staying in the EU. You know, referendums are notoriously unpredictable instruments of democratic will. That's why it's not sensible to have them unless you are compelled to. What governments should do is govern.