DER SPIEGEL: Mr. Faury, how often do you fly at the moment?

Faury: I fly about twice a week within Europe and France. Sometimes a little more.

DER SPIEGEL: But then surely in a private jet rather than a commercial airliner?

Faury: Mostly it's scheduled flights. Today, I actually flew in a private jet because Berlin is quite difficult to reach from Toulouse due to the current restrictions on air travel.

DER SPIEGEL: Can you understand why people are afraid to board planes at the moment?

Faury: Of course, I can understand, but I think the fear is unfounded. The ventilation on board, the filtration and air exchange, are efficient and safe. That's what all kinds of analyses we've done have shown. What remains is the problem of droplets when someone coughs or sneezes on the plane. That's why there is a requirement to wear a mask. In short: Planes are safe places, even in corona times, especially with a mask. Studies from renowned institutes, including Harvard, have confirmed this.

Guillaume Faury, 53, has served as CEO of the European aviation and defense firm Airbus since April 2019. Before that, the French national was the CEO of the company's Airbus Helicopters subsidiary.

DER SPIEGEL: But the passenger numbers show that people are reluctant.

Faury: I don’t believe that. The opposite is true: People want to fly. The truth is that the problem lies elsewhere. People are limited in their ability to travel – not only by the lack of flights, but especially by the inconsistent quarantine requirements, particularly in Europe. In other parts of the world, passengers already started flying again during the Christmas holidays. These trends make us confident.

DER SPIEGEL: What’s your view of the slow vaccination rollout in Europe?

Faury: First of all, it has to be noted: The speed with which effective vaccines have been developed and certified is unprecedented in the history of medicine. This is a magnificent scientific and industrial achievement. Unfortunately, we are now experiencing the logistical problems of manufacturing, delivery and administration. Admittedly, this is complex. But it is also true that we could have managed it better in Europe compared to other countries in the world.

DER SPIEGEL: How important are vaccinations for the aviation industry?

Faury: Even if we didn't have effective vaccines, there would still be other ways of dealing with the pandemic, most importantly the constant testing of travelers – a measure with which we are having good success. But in the long run, vaccines are invaluable to the future of our industry. They are highly effective, and I hope they will remain so despite mutations.

DER SPIEGEL: When we met you for an interview in the spring of 2020, the pandemic was just getting underway. At the time, you said that people would still want to discover the world by plane in the future. Do you still think that’s the case?

Faury: In the course of a global crisis like this, you of course have to constantly assess the situation and make adjustments as necessary. If you had asked me last autumn, my answer would have been very pessimistic. What we heard from business travelers at the time was frightening. Executives at large companies told us: "We will never travel the way we used to.

DER SPIEGEL: The mood in Germany doesn’t seem to have brightened.

Faury: I see it differently. The mood has changed completely. Now, the word from the business world is: "We need to fly again and visit our customers.” We have reached the limits of what we can do from afar. At the end of the day, there is no substitute for direct contact. I am more optimistic about this than I was six months ago.

DER SPIEGEL: Do you the think the number of business trips will increase again?

Faury: Yes, I believe they will. It will take time, but business travel will remain an integral and important part of our daily lives and the development of our economy. There’s no other way.

DER SPIEGEL: Does that also apply to private travel?

Faury: Everywhere in the world where passengers have the security of knowing that they can travel without hesitation and there are flights, demand is increasing very strongly. After being locked up for a year, people just want to get out. The A380 aircraft between Dubai and Britain, for example, are quite full at the moment. So we can see that things are picking up.

DER SPIEGEL: So, you think everything will go back to the way it was?

Faury: Corona will cause lasting changes. One trend is that planes have to have internet on board. People want to be connected and make the aircraft cabin their office, perhaps because they have grown accustomed to mobile working from home. They might also be inclined to fly less through hubs in order to avoid crammed airports with too many other people, meaning the demand for non-stop flights could increase.

DER SPIEGEL: That would not be a great scenario for your large aircraft.

Faury: There are also opportunities for us. We see the A321XLR, in particular, as a good solution. The aircraft is smaller than conventional long-haul aircraft, but can also cover very long routes. Airlines see this aircraft as a way to transport people on longer routes from smaller airports directly to their destination.

DER SPIEGEL: In which region do you believe a recovery is most likely?

Faury: In countries like China and India, or in Southeast Asia, a growing number of people want to rise into the middle class and travel. The airlines now need certainty so they can ramp up the flight schedule again. People don’t book flights without reliable information. Asia, the United States and other parts of the world are better about organizing this than the Europeans. The situation here is very worrying. We see this in our own customers who want to pick up aircraft. Flights get cancelled, so sometimes we have to pick up the customers. Then they have to go into quarantine, meaning it can easily take three weeks to pick up a new plane. Let me be clear about this: The corona measures in Europe are devastating for aviation.

DER SPIEGEL: Does that mean that the coronavirus measures in Germany need to be loosened?

Faury: Finding the right balance isn’t an easy task. But Europe is already playing a very risky game. The damage done to society with the harsh measures sometimes far outweighs the benefits. The fact that we wear masks is beneficial because you protect people from transmitting the virus. But the closure of businesses in the medium or long term is a threat to our prosperity and competitiveness.

DER SPIEGEL: Instead of government aid, you took out a huge loan because of the corona crisis. Can you rule out the possibility that you will soon need public money after all?

Faury: I am always very careful with guarantees. But we believe that we are quite solidly positioned on the liquidity side, which you can see from our financial results last year. As such, I don’t anticipate that kind of situation at this time.

DER SPIEGEL: Are you planning to cut more than the 15,000 jobs you announced last year?

Faury: We experienced a 40-percent drop in production as a result of the pandemic – and that in an area in which we employed around 90,000 people. If you translate that into missing workloads, we would be talking about 35,000 jobs. We have worked hard with our social partners, governments and other stakeholders to minimize the impact of the pandemic on our workforce. The result is an adjustment involving 15,000 positions. With the help of government measures like the short-time work (work furlough programs), we have found solutions for 5,000 jobs. Currently, about 10,000 jobs that belong to the commercial part of Airbus are still at stake. One thing is certain: We want to avoid having to lay people off.

DER SPIEGEL: Is it helpful to Airbus that Boeing is not only having to battle the consequences of the COVID crisis, but also setbacks with the 737 Max and the 787?

Faury: We are not currently competing for new orders because the airlines are not placing large orders. Instead, we are working to complete orders that have already been placed. We tend to be looking at ourselves at the moment rather than Boeing.

DER SPIEGEL: The two big players are unlikely to remain without competition forever. At what point do you think Chinese manufacturers will begin building aircraft for the Western market?

Faury: They will start with the domestic market first. After all, the airlines there are mostly owned by the state. So, they will introduce the models being developed now and allow the technology to mature in their own country. Then they will head for the export market. That certainly won’t be in the first half of the decade, but later. We have seen in Russia and Brazil that building an aviation industry isn’t easy. It takes size. But China also has size, and that’s why I believe they can do it. In any case, we are not underestimating them.

Faury: We take Comac and the other Chinese companies very seriously. They are ambitious, and they are catching up technologically. But we protect our own inventions and defend our technological leadership. Where we are in 30 years is completely up to us.

DER SPIEGEL: By then, aviation is supposed to be climate neutral. By 2035 at the latest, you want to have a hydrogen-powered aircraft in the air. Is that realistic?

Faury: There is no alternative to this course. The greatest headwind for aviation is carbon dioxide emissions. Aviation is actually very environmentally friendly, if not for the CO2 emissions – even if they only account for 2 percent of global emissions. That's why we want to be pioneers in this area.

DER SPIEGEL: Jet fuel seems to be harder to replace than fuel for cars.

Faury: The next generation of aircraft will have virtually no impact on the environment. Hydrogen is a source of energy that we have gained a great deal of experience with in areas like space travel. Hydrogen is becoming a universal energy source both for other means of transport and for a number of industrial processes, like those in the steel industry.

Faury: We are convinced that the capacity of batteries is many times too low, particularly in the medium and long-distance range. Hydrogen is more suitable.

Faury: We are optimistic about that, too. Synthetic fuel based on hydrogen derived from renewable sources can already be used in today's engines. In a second step, we are researching electric engines in which fuel cells on board convert the hydrogen into electricity. We believe this is technically feasible. Then we would only have to depend on the availability of sufficient hydrogen from renewable sources.

DER SPIEGEL: Climate-neutral aviation in 2050 – can you promise that?

Faury: We are putting everything we have into this. We will still have some conventional aircraft in use then, but more emissions-free planes will be constructed.

DER SPIEGEL: Mr. Faury, thank you for this interview. 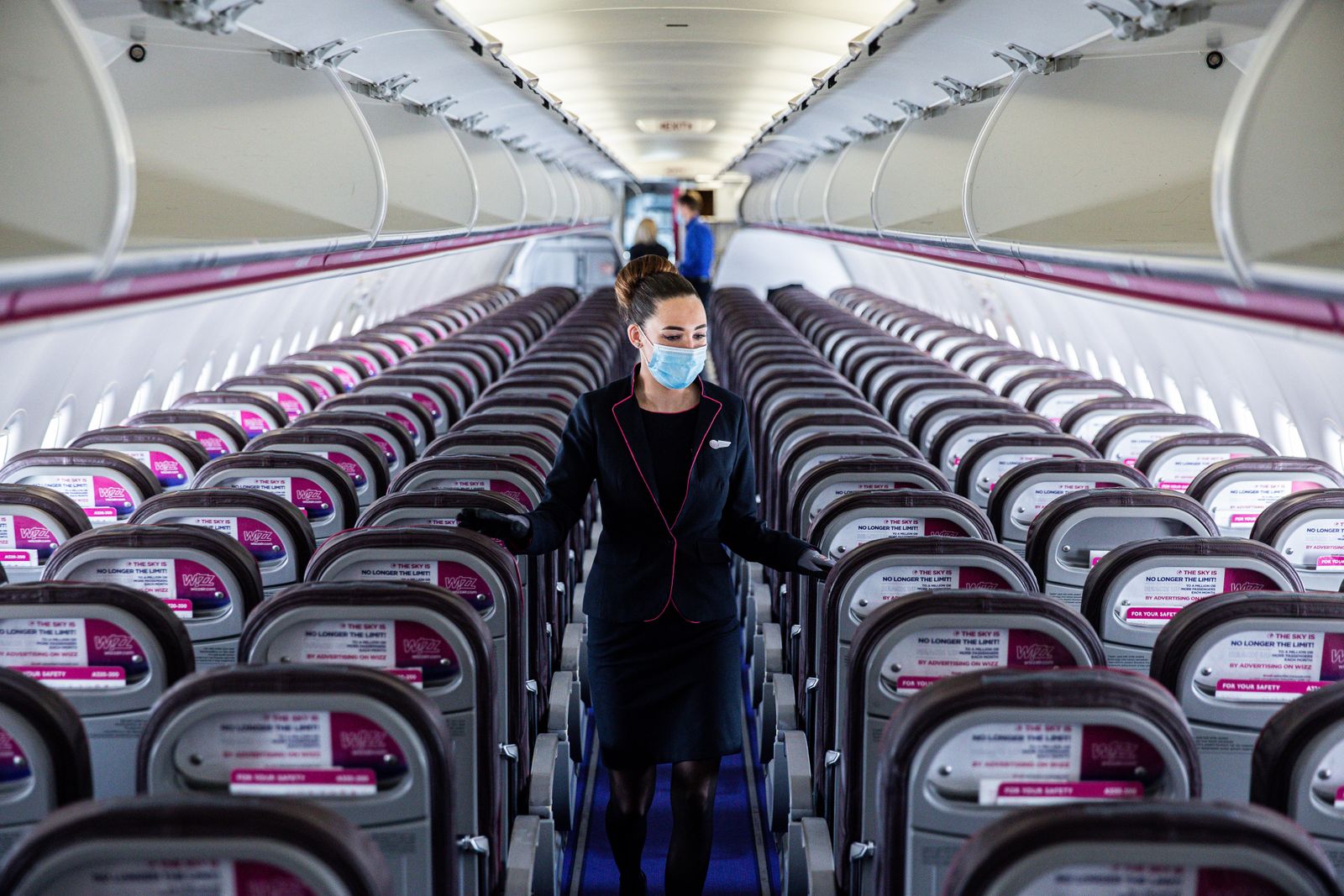 A crew member with a protective face mask: "People want to fly." 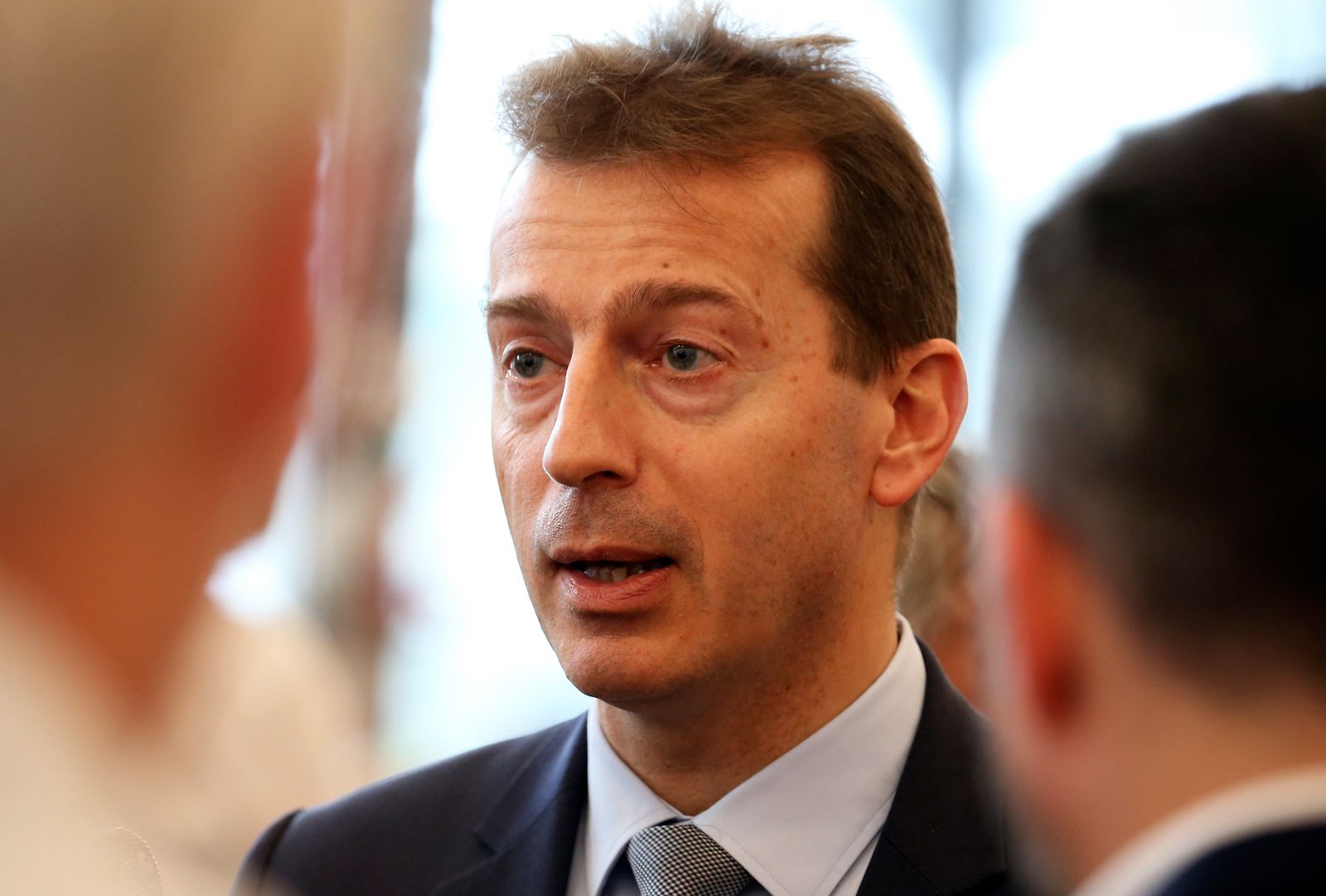 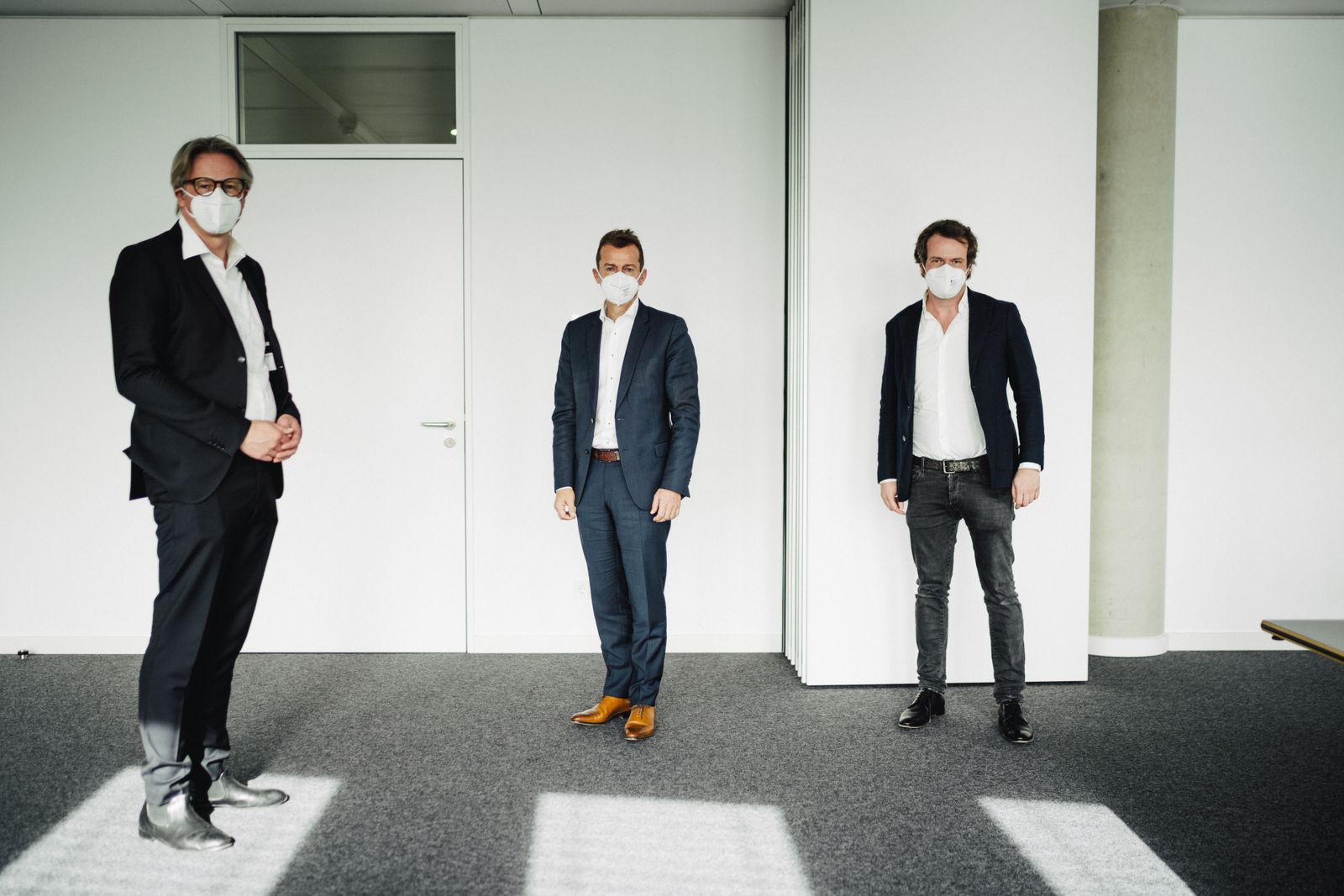 Faury (center) with DER SPIEGEL journalists Gerald Traufetter and Martin U. Müller: "Where we are in 30 years is completely up to us." 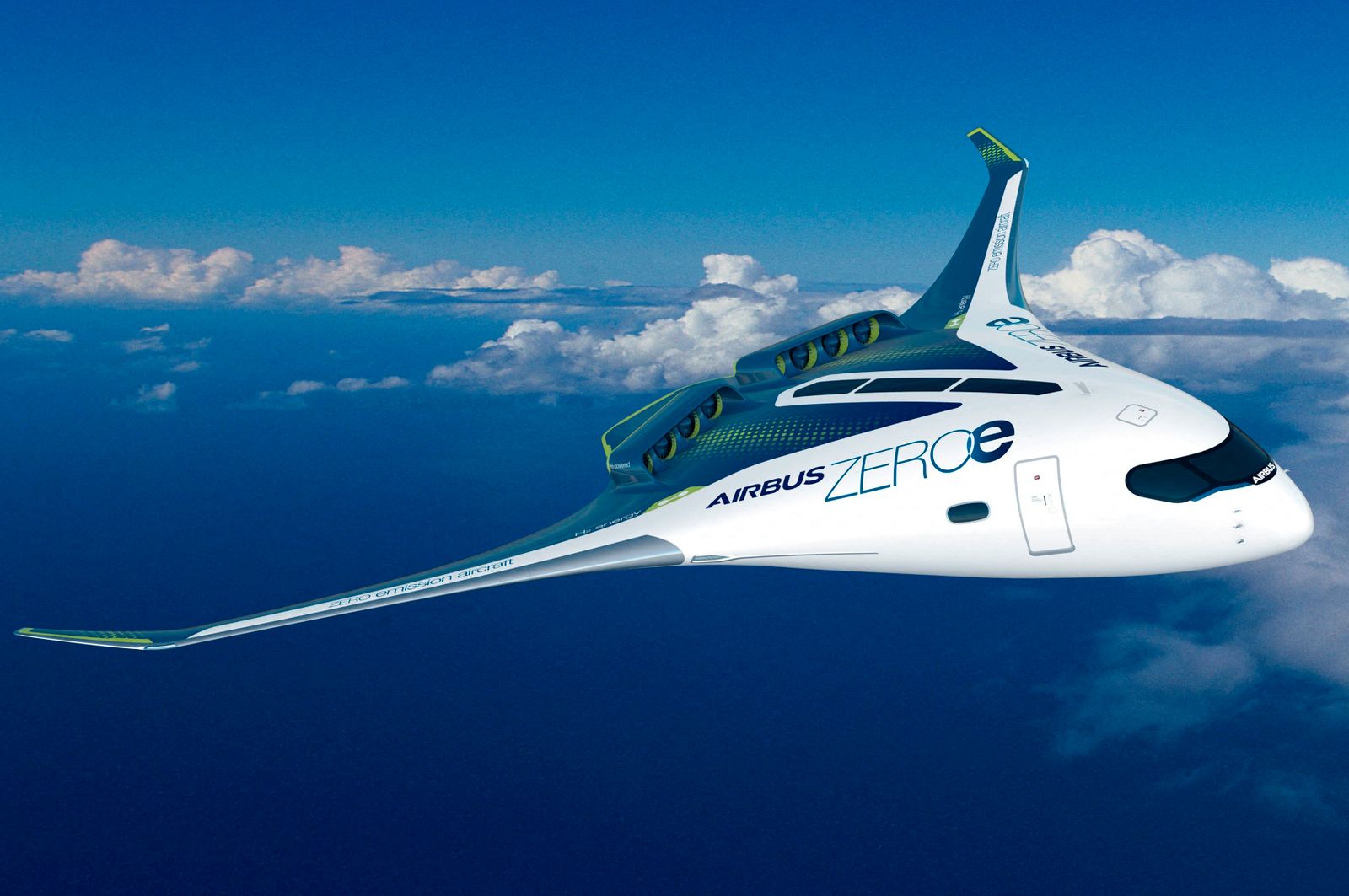 An artist's impression of the ZEROe Airbus concept aircraft: "The next generation of aircraft will have virtually no impact on the environment."