Roger Hallam, 53, is not free to travel far from his farm in Wales. He was arrested in September 2019 for planning to fly a drone near Heathrow Airport as a way of protesting against the construction of another runway. He is now required to report to a nearby police station every day.

Hallam worked for many years as an organic farmer, but he ceased operations after, as he says, several harvests were spoiled by heavy rains. After that, he intended to get his Ph.D. at King's College in London, with a focus on resistance movements, but he never finished his dissertation. Last year, he was part of the group that founded Extinction Rebellion, a movement that seeks to use peaceful blockades and attention-grabbing actions to force governments around the world to lower their greenhouse gas emissions. In Germany, "XR" activists chained themselves to the Chancellery fence in June and in October, they blocked several large intersections and bridges in Berlin.

Our interview with Roger Hallam took place by video conference and was completed before Hallam's controversial comments about the Holocaust were published by the German newsweekly Die Zeit. Hallam seemed to downplay the Holocaust in those comments, leading his German publisher, Ullstein Verlag, to cease deliveries of his book just days before it was to go on sale.

DER SPIEGEL subsequently submitted written questions to Hallam about his Holocaust comments. On Thursday afternoon, after this interview was finalized, he apologized for his comments on Facebook, saying it hadn't been his intention to downplay the Holocaust.

DER SPIEGEL: You claim that in the next two generations, billions of people will die as a result of climate change. But that's nothing more than scaremongering!

Hallam: Predictions by the IPCC (Intergovernmental Panel on Climate Change) say we'll hit four to five degrees of global warming by the end of the century if we don't reduce our CO2 emissions. Add to this a bigger weather variability due to the collapse of the jet stream, the global strong winds at high altitude and you won't be able to grow grain at scale. Yet, our civilization is based on storable grain. The consequence is mass starvation, which leads to mass death and eventually to social collapse. The consequence will be genocide or mass migration -- or some combination of the two.

DER SPIEGEL: Are you not making too many predictions at once? The claim that there won't be enough grain is far-fetched on its own.

Hallam: Really, that's your responsibility as journalists to go and do the math. What I am responsible for is organizing a rebellion against governments. I mean, why don't you do an article on climate change and rape?

DER SPIEGEL: You can't blame the climate change for the rape of women during war.

Hallam: No, climate change is just the tubes that the gas comes down in the gas chamber. It's just a mechanism through which one generation kills the next generation.

DER SPIEGEL: You're comparing climate change to the systematic murder of millions of Jews in Nazi Germany? You can't be serious.

Hallam: A lot of XR activists don't agree with my Nazi comparisons. I am not the speaker of the movement. But it's my personal opinion that the elites have made the conscious decision to destroy the next generation in order to maintain their power.

DER SPIEGEL: Nobody deliberately planned climate change in order to harm someone. It's simply a consequence of our way of life.

Hallam: But the elites have the possibility to do something about it. The politicians are fully aware but continue to emit CO2 into the environment. Take the Nuremberg trials, where Nazis were put on trial after World War II. The population of Germany wasn't hanged because it was assumed that it did not have sufficient agency in the project of genocide. However, the people involved in government did have the free will to take one decision or the other. They were complicit in the genocide project.

DER SPIEGEL: Do you think it helps your cause to constantly compare the way policymakers are dealing with climate change to the horrors of the Nazi regime?

Hallam: I do believe that they are comparable.

DER SPIEGEL: In an interview with the German weekly paper Die Zeit, you said the Holocaust was "just another fuckery in human history." Now, German Extinction Rebellion groups are distancing themselves from you and you seem to be increasingly isolated. Is it really worth it?

An Extinction Rebellion protest in Berlin's government district in October

Hallam: Extinction Rebellion was set up to tell the truth about the climate catastrophe in plain, everyday language. To tell the truth is the first virtue, as the English political philosopher John Locke put it. And the truth is: We are engaged in the murder of the world's children.

DER SPIEGEL: Your German publisher Ullstein Verlag not only distanced itself from your statements, but even stopped the delivery of your book just days before it was to hit the shelves. What are you going to do now?

Hallam: My resolve is to tell the truth as well as I can and what will be will be. If publishers choose not to publish my book, obviously that is their choice.

DER SPIEGEL: More and more countries are setting increasingly ambitious reduction goals. The democratic process seems to be working. Why do we still need a revolution?

Hallam: If you're driving a lorry towards a concrete wall at 50 miles an hour, and you reduce your speed to 48 mph, then it's obviously not enough to avert the catastrophe. Everybody is ducking responsibility. The politicians are worried they might not be re-elected. The climate campaigners (environmental NGOs) won't take effective action because they believe it won't lead to anything, and the public isn't voting because they don't think the politicians will do anything about it.

DER SPIEGEL: Can you be a bit more precise with your accusations?

Hallam: Of Course. Some time ago, I went to the chief executive of Greenpeace and told him about the plan of fighting the climate crisis with mass civil disobedience. He said: "Roger, the climate crisis is too abstract, and you won't be able to create A mass mobilization around it." He was being pragmatic. Everyone is waiting for the next guy to move. It's what I call the death spiral of pragmatism. Civil disobedience breaks through the death spiral.

DER SPIEGEL: And leads to what?

Hallam: We want to put the government in a dilemma. They either arrest you, which provokes sympathy from others and brings even more people onto the street. Or they put up with disruption of the public space. If both of those options become intolerable, the politicians have to opt for the third choice: negotiations. That is our theory of change, based on the work of the American academics Erica Chenoweth and Maria Stephan on civil resistance. According to their research, nonviolence in the past century has been successful 54 percent of the time, with violence only working 25 percent of the time. The strategy of non-violence has been used successfully dozens of times, such in Eastern Germany 1989.

Roger Hallam being dragged to a police van following a protest action in London in 2017.

DER SPIEGEL: You, on the other hand, have been put out of action.

Hallam: I would have gone to prison for the Heathrow thing, even if no one had known about it. It's like the White Rose movement that handed out leaflets against the Nazis. They weren't doing it because they were going to win, but because they couldn't live with themselves as moral beings if they just stood by and did nothing.

DER SPIEGEL: Isn't this just another questionable comparison? The members of the White Rose movement were beheaded by the Nazis.

Hallam: Of course, their sacrifice was so much greater than mine. But the point I am making is that one should act on what is morally right, regardless of whether you think you will be successful. This is the virtue ethics position taken by most rebels in history.

DER SPIEGEL: If the elites, as you call them, won't do anything, will there come a day when violence becomes an option?

Hallam: I've given you the numbers. Non-violent protest is more promising! In terms of making a sociological prediction about what could happen, then obviously there is a high probability of descending into violence once you start experiencing serious social collapse. Research into protest movements shows that once you engage in violence, the violence pushes out the non-violence. This is why all successful non-violent movements have to have a zero-tolerance policy regarding violence, because once you allow violence, a society starts sliding towards civil war. You can see this sort of thing happening in Hong Kong at the moment.

DER SPIEGEL: Let's imagine for a moment that you will succeed in forcing governments to the negotiating table. Do you really believe they would give up power and hand it to citizens' assemblies, as you are demanding?

Hallam: Before 1789, people didn't believe that the French aristocracy was going to give up its power. Come on, guys. Have some historical imagination!

Hallam: Was there anyone at DER SPIEGEL predicting in 1988 that the Berlin Wall was going to come down?

DER SPIEGEL: How is your idea of citizens' assemblies supposed to work?

Hallam: It's a national citizens assembly that has sovereign power over what government action is required to minimize the probability of climate chaos and social collapse. The members are selected randomly, and the government has to do what it says.

DER SPIEGEL: Why do you think a citizen assembly would make better decisions than existing parliaments?

Hallam: There's a whole body of political theory and research that says that the highest level of human rationality is attained when free individuals come together to deliberate on a subject of common concern.

DER SPIEGEL: What happens if the citizens' assembly doesn't care much about climate change?

Hallam: The probability that people will send their own children to their deaths is fairly minimal.

DER SPIEGEL: Even if a citizens' assembly does the right thing from your perspective, it's still possible that some people will still want to continue driving SUVs and eating meat.

Hallam: I was going to make a joke and say: "Yeah. They're all going to be shot." But you might quote me and make out that I'm an extremist as well as an antidemocrat.

DER SPIEGEL: You once said: "When a society engages in morally corrupt activities, democracy is irrelevant."

DER SPIEGEL: How do you define moral law?

HALLAM: It is unjustified to destroy the lives and livelihoods of others for no good reason aside from advancing your own interests. In other words: Don't shit on your children!

DER SPIEGEL: Mr. Hallam, thank you very much for this interview. 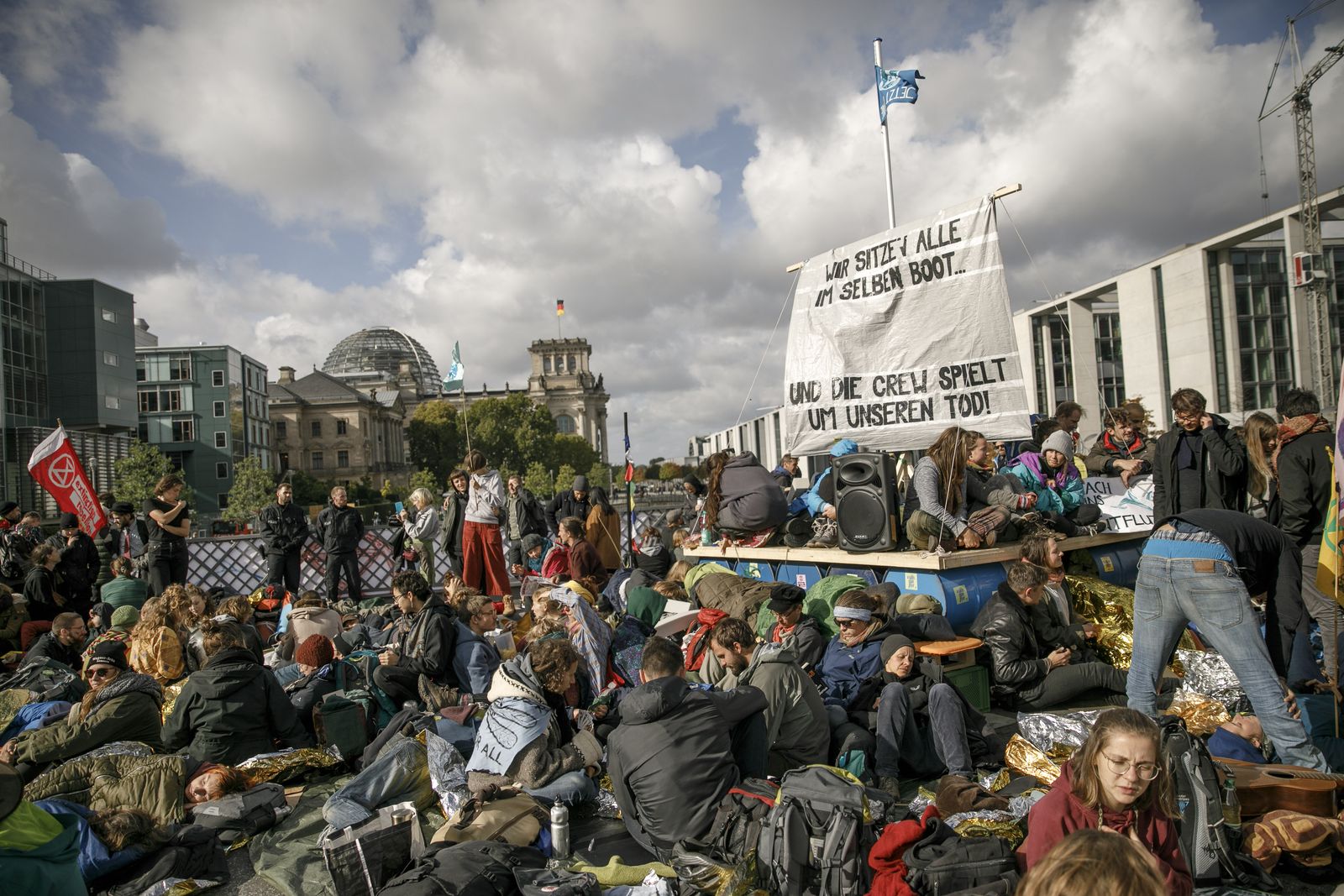 An Extinction Rebellion protest in Berlin's government district in October 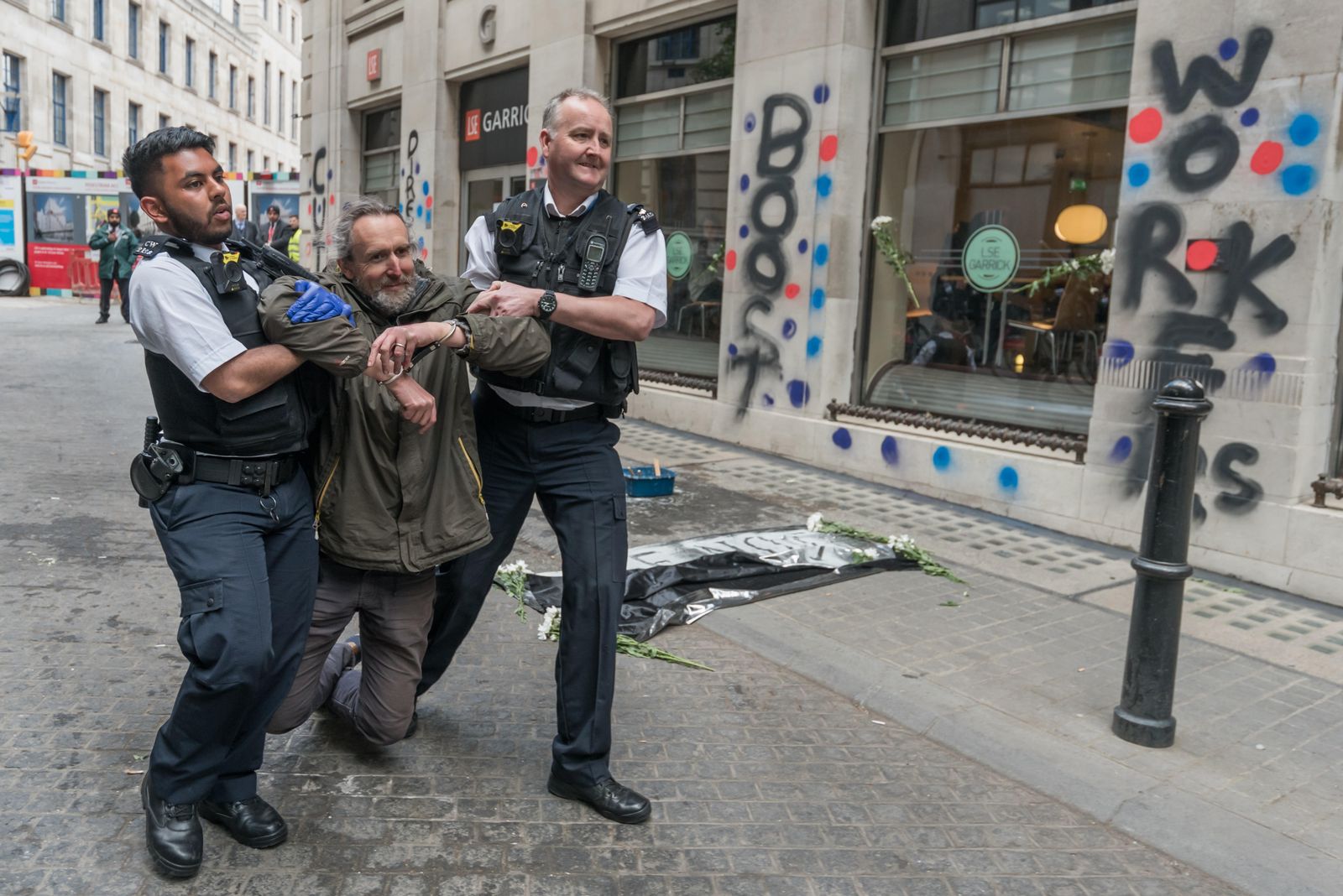 Roger Hallam being dragged to a police van following a protest action in London in 2017.