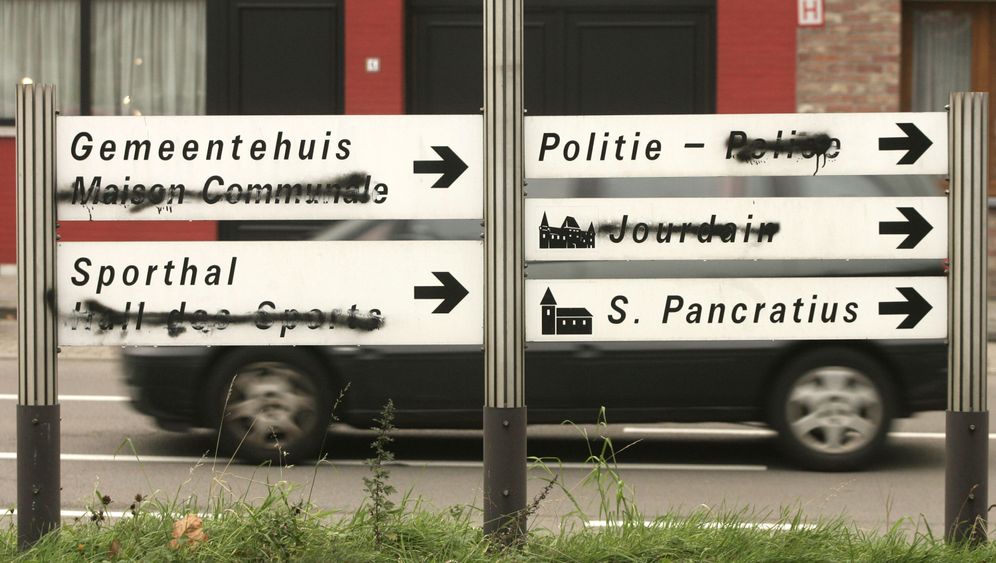 Belgium has sunk into political chaos. Following the parliamentary elections six months ago, all attempts to build a new government have failed. The country is divided into two camps that oppose each other, apparently irreconcilably: the socialists, who won the most votes in Wallonia, the French-speaking southern region of the country, and the nationalist conservatives in Flanders, the wealthier Dutch-speaking northern region.

The New Flemish Alliance (N-VA) obtained the most parliamentary seats in June's elections. Its leader Bart De Wever wants to split Belgium into two. In an interview with SPIEGEL that was published in German on Monday, De Wever described how Begium is the "sick man" of Europe and has "no future in the long run."

The interview caused a massive outcry throughout Belgium. The French-speaking daily Le Soir called it "a bomb" intended to stir up the markets for Belgian government bonds. The Flemish newspapers were more sympathetic regarding the content of the interview, but criticized its timing.

De Wever himself said he regreted it if anybody felt insulted but confirmed the message of the interview. "I have my opinion and my analysis is accurate," he said. "There is nothing in the interview that is not true."

SPIEGEL: Mr. De Wever, how much longer do you think Belgium will last?

De Wever: I'm not a revolutionary, and I'm not working toward the immediate end of Belgium. And I don't have to do that, either, because Belgium will eventually evaporate of its own accord. What we Flemish want is to be able to control our own judiciary, as well as our fiscal and social policy. We feel that foreign policy is in better hands with the European Union. But the nation of Belgium has no future in the long run. It is too small for greater political ambitions, and it's too heterogeneous for smaller things like taxes and social issues.

SPIEGEL: Using those arguments, Bavaria should have seceded from the Federal Republic of Germany long ago.

De Wever: No, because Bavaria is part of the German democracy. If you look at German history, you can see how the country came about. In Belgium, you see how a country is breaking apart. And the consequences are fatal. In 2003, the German economist Hans-Werner Sinn coined the expression "sick man of Europe," in reference to Germany. Companies were leaving the country or going bankrupt, and the tax burden on citizens was going up and up. Today Germany is Europe's locomotive once again, and Belgium, after endless political quarrels, is the sick man.

SPIEGEL: Are you using economic arguments to pursue secession for the Flemish people?

De Wever: Once again, if it were possible to pursue the reforms that are now needed in Belgium as a country, I wouldn't stand in the way. But it isn't possible. The Walloons -- especially the Socialists, as the strongest party -- are blocking all reasonable reforms. That's why I say: Belgium isn't working anymore! Belgium is a failed nation.

SPIEGEL: So you want states to become ever smaller, while everyone around you is working toward a large, unified Europe?

De Wever: The developments in Europe and, most of all, the introduction of the euro, make partition much easier. I used to think that if we got rid of the Belgian franc, it would lead to economic disaster. Today both parts of Belgium simply continue to use the euro.

SPIEGEL: It's always said that the last few things holding Belgium together are beer, football and the royal family. But the Flemish and the Walloons each have their own beer, while the country's football is second-class and not worthy of collective identification. That leaves the king.

De Wever: Many people have a romantic notion of the monarchy. Even in republican France, the president puts on monarchist airs. But the monarchy is part of the Ancien Régime, part of the past. The king isn't important to me.

SPIEGEL: But he is the one who charges politicians with the formation of a government.

De Wever: The fact that the king still plays a political role is a problem. The king plays an important role in a crisis, taking charge of forming a government. This is a disadvantage for the Flemish, because the king doesn't think the way we do. It's an advantage for the Walloons, because they are allied with him. We favor a republic.

SPIEGEL: It's been half a year since the parliamentary election, and Belgium still has no government. Has the king failed?

De Wever: It's becoming more and more difficult, at any rate, to form a federal government. If we join such a government, there is a great risk of losing the next election. We were elected because we support radical changes and because the voters trust us not to cave in after six months of negotiations.

SPIEGEL: Then new elections are the only option. The governor of the Brussels region, a francophone Socialist, says that would be the end of Belgium.

De Wever: It's strange that those who don't want the end of Belgium are talking about it so much.

'If He Lived in Our Country, Even Obama Would Still Be a Foreigner'

SPIEGEL: Your opponents accuse you of blocking the negotiations to get new elections and, as a result, even more votes.

De Wever: We have a strategy, and we've never made it a secret: We want to move toward Europe and Flanders, step-by-step. We don't want a revolution. I'm conservative by nature, and I don't like adventures.

SPIEGEL: Why should the Walloons agree to financial autonomy for Flanders? If that happened, Flanders, which is strong economically, could cut off their money supply at any time, and the Flemish would have control over them.

De Wever: We offer solidarity, including financial solidarity. But if we transfer funds to Wallonia, we will only do it at normal conditions. The money isn't supposed to be a drip, like drugs for a junkie.

SPIEGEL: Hasn't it been the other way around before, during the history of Belgium? In the past, many Flemish people found work in the south of the country.

De Wever: It's true that Wallonia was strong economically in the 19th century and at the beginning of the 20th century. But there was never a transfer of funds to Flanders. Only the businesspeople who lived in Brussels were rich. To say that we Flemish benefited from social solidarity and that, now that we're rich, we are no longer willing to pay would be rewriting history.

SPIEGEL: But money isn't the only issue for you, is it?

De Wever: Of course, it's also a matter of our national and cultural identity. Saying that seems outmoded today. The embodiment of the modern age is the "global citizen," who is as mobile, flexible and rich as possible. In reality, most people are afraid of globalization and are asking themselves the question: Where exactly do I belong? This is no different in Flanders.

SPIEGEL: And you now offer these people a "Flemish identity?"

De Wever: Yes. If people no longer have a sense of social and cultural identity, they turn away from the democratic parties and turn to those that espouse an unhealthy and, in some cases, racist nationalism. And they say: We are threatened! Out with the foreigners! No more foreign religions!

SPIEGEL: And that isn't your motto?

De Wever: We want foreigners to be integrated into society, not driven out. But it's precisely this integration that isn't working. Here in Belgium, we have fourth-generation immigrants who only live among their own. The grandfather was a foreigner, the son, his son and so on. If he lived in our country, even US President Barack Obama would still be a foreigner. If we don't solve this problem, more and more people will flock to populists like Geert Wilders and Jean-Marie Le Pen.

SPIEGEL: But many in Belgium see Bart De Wever as a wolf in sheep's clothing, saying that he seems mild enough, but that he bites hard as soon as he can.

De Wever: If those people were right and I was in fact a right-wing extremist in disguise, why didn't I join the Vlaams Blok in 2003?

SPIEGEL: You are referring to the right-wing extremist Flemish separatists.

De Wever: They captured almost a quarter of votes, 24 percent, in 2004. Strictly speaking, they were the most powerful force in Flanders, and if I had been a member I would have become a member of parliament right away. Instead, I joined a party that was very small at the time.

De Wever: I want nothing to do with the right-wing populists. They harm the Flemish movement.