SPIEGEL: She helped put together the most ambitious rescue package in European history.

Fischer: Yes, the rescue package for the euro is the right thing to do, but it should have come in February. At that point, it was already clear that Greece is merely a trigger for speculators to launch an all-out attack against the euro. Europe would have been able to act much earlier if it hadn't been for the chancellor. And now most of the action was taken by (French President Nicolas) Sarkozy and (Italian Prime Minister Silvio) Berlusconi, not by our government. The chancellor's role in this was simply to agree to the plan.

SPIEGEL: But does it matter? The main thing is that the rescue package is in place.

Fischer: It certainly does matter. Germany is more isolated in the EU than ever before but we Germans are still bearing the brunt of the financial burden while the French president is being celebrated for it. That's really first-class statesmanship! I can't remember anything as embarrassing as this happening since 1949.

SPIEGEL: You're really on a roll. Aren't you exaggerating a little?

Fischer: Not a bit. According to the media, the chancellor didn't know what she was about to face when she traveled to Brussels to attend the summit meeting with the other leaders of the euro group. This is unbelievable, if it's true.

SPIEGEL: How should Merkel have reacted?

Fischer: The chancellor should have put forward her own proposal to rescue the euro, in coordination with France. We have a responsibility as Europe's strongest economic power. The EU cannot solve its problems in the long run if Germany hides itself. We are paying a high price for our resistance. We are viewed with suspicion in the entire Mediterranean region, and are seen as villains in Greece. This is extremely deplorable given what our country has done for Europe so far.

SPIEGEL: Has Merkel failed as a European politician?

Fischer: The chancellor still has a second chance. During her speech at the awarding of the Charlemagne Prize she said that if the euro fails, the entire European project will fail. That's true. Now she has to act accordingly. Rhetoric alone isn't enough anymore.

SPIEGEL: The EU already existed before the euro did. Why should it be finished if the common currency doesn't survive?

Fischer: It isn't just about a currency, but about the European project per se. It's about the issue of whether Europe is strong enough and has the common desire to defend this project against external attacks, in this case, by speculators. Unity and decisiveness are key here. Unfortunately, our country has reacted in a complete different way since the crisis over Greece began.

SPIEGEL: How is it possible for a small country like Greece to plunge the EU into an existential crisis?

Fischer: From the very beginning, it wasn't just about Greece. The markets brutally confronted Europe with reality. All our beautiful illusions -- including my own, -- and all our self-delusion were swept away. The choice today is between true integration and dissolution.

SPIEGEL: What illusions do you mean?

Fischer: It was always said that we couldn't talk about a United States of Europe anymore. It was said that the euro could function solely on the basis of the Maastricht criteria, without further political integration. The markets merely made it clear to us that it doesn't work that way. This is why we must now take a courageous step forward.

SPIEGEL: And where would this step go?

Fischer: Now that we have the €750 billion guarantee, the monetary union has transformed itself into a community of solidarity. That's what has to be implemented now, which means substantially more and not less integration.

SPIEGEL: A community of solidarity means that Germany must pay for the failures of others.

'Germany has Benefited the Most From the EU'

Fischer: What nonsense! The European Union was a transfer union from the very beginning. The common market and the agrarian market were and still are primarily transfer guarantees for Germany and France! And Germany has benefited the most by far. Without the euro, many countries would have devalued their currency. We, as an exporting nation that depends mainly on Europe, would have paid the price, because our products would have become more expensive. Now we have to make up for this a little. There is no way around it.

SPIEGEL: Solidarity means answering for those countries that, like Greece, have lied to the community?

Fischer: Solidarity is a two-way street. This means that, in the future, one country in the euro group cannot send its workers into retirement at 67 while another does so at only 55. It will also not be an option for some countries to accumulate debts as they please, while others save. There are several countries that have to become more competitive. We know now that the euro cannot function without all of this.

SPIEGEL: In other words, Europe has to become more German.

Fischer: No, more competitive. In terms of social policy, taxes and economic policy, the EU members must coordinate their activities more effectively, even becoming largely integrated.

SPIEGEL: Why didn't you start coordinating economic and financial policy in the EU more closely when you were in office?

Fischer: Germany was in an extremely difficult position economically at the time. We had to make up for our failure to modernize in the 1990s. We eventually had the courage to bring about Agenda 2010 (editor's note: a package of unpopular welfare cutbacks and labor market reforms enacted in 2003 and 2004 by the center-left coalition government headed by Gerhard Schröder and Joschka Fischer). It was the right thing to do, but it ultimately led to the end of our government.

SPIEGEL: You set a bad example. Under your center-left government, Germany was one of the first countries to violate the stability criteria.

Fischer: It became clear that the Maastricht criteria only worked in good economic times. We violated the criteria because we had to pay for the economic consequences of German reunification. It was an economic and social challenge that wasn't taken seriously enough in the 1990s.

SPIEGEL: You're saying that you weren't to blame, but the criteria?

Fischer: Of course we made mistakes, but any other German government would have gone through the same at the time. We didn't exactly sit there and twiddle our thumbs. We took on painful reforms that were unavoidable, and with all the known consequences.

SPIEGEL: How would you prevent Greece from needing help again in 10 years?

Fischer: The country is currently making a huge effort, and it needs help to get back on its feet. This is also in our and in Europe's interest! But even in 10 years, the Greeks won't be Germans and the Germans won't be Greeks. We don't need a reeducation program, but what we do need, for example, is more effective financial controls. The (European) Commission's proposal to have national budgets reviewed in Brussels makes sense.

SPIEGEL: The groundbreaking decisions of the last 20 years were made against the will of the majority of the population: the introduction of the euro, the expansion eastward, and now the bailout package. Doesn't Europe need a domestic majority?

Fischer: That's a key issue. But where would we be today without all of these decisions? I find that many politicians are not prepared to truly champion this Europe and, in doing so, to fight for majorities. It's time to put an end to the practice, in Brussels, of making decisions within the group of heads of state and then, at home, holding "the EU" responsible for those decisions.

Fischer: You have to explain to the population what Europe is about. And you have to be prepared to lead and to turn minorities into majorities. I have never made a secret of my European convictions. I took an offensive stance in the media, on market squares and in election campaigns, both at the national and the regional level.

SPIEGEL: But most German politicians are committed to Europe.

Fischer: Only as long as it remains very abstract. But we have to give people enough credit to deal with unpleasant truths. No one explains why the euro is important for Germany and what its failure would mean. And no one explains why Germany has always paid -- because it happens to be the big winner in Europe. One has to explain things, starting at the very top! And to do so you also have to be prepared to take a political risk.

SPIEGEL: Your successor, Guido Westerwelle, has been almost invisible in the euro crisis. Do foreign ministers no longer play a role in Europe since the Lisbon Treaty?

Fischer: The foreign ministry is still responsible for Europe.

SPIEGEL: In other words, Westerwelle could have done more?

Fischer: I won't comment on my successor. But you too read the papers.

SPIEGEL: Once again, how severely has the role of the foreign minister been reduced?

Fischer: If you have political will and energy, and if you are deeply passionate about Europe and develop ideas, no one, even today, will be able to prevent you from getting involved.

SPIEGEL: We would like to consult you as a proven expert on false starts.

Fischer: Which I'm not.

SPIEGEL: When you look at the first few months of the new federal government, do you feel reminded of the beginning of your own center-left coalition back?

Fischer: Not at all.

SPIEGEL: But in your case, everything was frantic at the beginning, too.

Fischer: I know how it feels when you first come into office. You can't believe it. You feel like you've finally made it! And then there are those gray-faced, morose predecessors creeping out of their offices, worn out and completely exhausted. Governing seems very easy at first, until the first problems arise. In our case, things happened very quickly, because we were dealing with the looming Kosovo war from the start. You should observe what governments look like in the freshness of youth, and then what they look like two years later. I experienced all of that. In this sense, I understand some of what has happened in the coalition.

SPIEGEL: Then you're an expert after all.

Fischer: Now wait a minute. I think that the FDP's hara-kiri is unprecedented. Without enemy action and without pressure from the opposition, they are plunging themselves into every sword around them. I have to say it makes my jaw drop. I can't really understand why they did this.

SPIEGEL: What advice would you have for your liberal colleagues now?

Fischer: Oh, I'm already looking forward to the day when the coalition decides to reintroduce the full value-added tax rate for the hotel industry. It will probably have to be part of the austerity package. The FDP hasn't understood that the world has radically changed in the financial crisis. Otherwise it would never have made such a decision. And otherwise it would not have stuck to its plans for tax cuts as stubbornly as it did.

SPIEGEL: And what advice do you have for your own party? Should the Greens steer themselves in the direction of the CDU, or should they enter into an alliance with the SPD and the Left Party?

Fischer: You'd have to ask the people who are in charge today. I've noticed how seriously the Left Party is struggling with itself. They don't want to end up like the Greens, but they would like to be part of the government. They want to have their cake and eat it too. That won't work.

SPIEGEL: We've noticed something interesting. The Greens are doing better without Joschka Fischer. They are currently achieving a sensational 16 or 17 percent in the polls. How do you explain this?

SPIEGEL: Mr. Fischer, thank you for this interview. 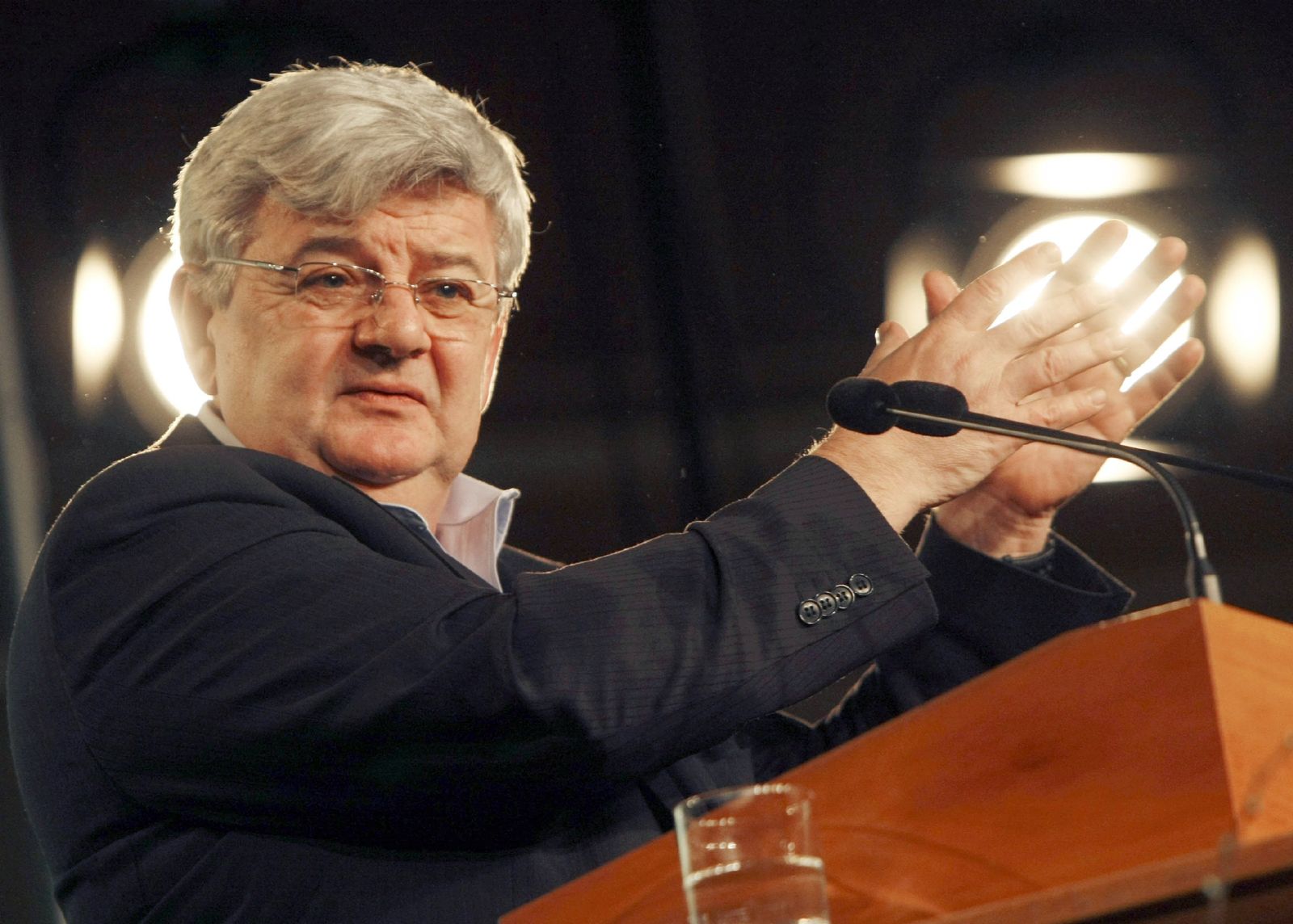