SPIEGEL: Commissioner Oettinger, did Germany last week learn the hard way that the Italians aren't just the better footballers, but also the more skilled negotiators? Italy beat Germany in the semi-final of the European Championship, while Italian Prime Minister appeared to defeat German Chancellor Angela Merkel at the European Union summit in Brussels.

Oettinger: Italy deserved its victory in football. At the EU summit in Brussels, there was an appropriate compromise that is acceptable for Germany and gives Italy a real chance.

SPIEGEL: We find it hard to recognize a compromise. At the beginning of the summit, the chancellor didn't want to talk about short-term measures, but at the end she even agreed to them.

Oettinger: Never before have the negotiating positions among the countries been so different and the pressure to reach a decision so high at the same time. It required flexibility from all participants. Italian Prime Minister Mario Monti wanted significantly more, but now he can refinance his sovereign debt under more favorable conditions. In return, he had to accept a clear constraint, namely to reduce his net borrowing.

SPIEGEL: The German government had to back down on two key issues: In the future, the euro bailout fund will be allowed to inject money directly into banks, and it will probably even buy up the government bonds of ailing countries.

Oettinger: The direct financing of banks will not happen until the new banking regulatory agency begins its work. Although Italy will gain access to a European financing fund without direct control, there are guidelines for the necessary reforms and budget consolidation.

SPIEGEL: Meanwhile, the International Monetary Fund, with its expertise, is being left out for the first time.

Oettinger: Our people at the Commission are competent enough.

SPIEGEL: You don't believe that the Commission will impose sanctions on big countries.

Oettinger: The sanctions, which have already been signed into law, are extensive. Now we have to consistently apply the sanctioning mechanisms.

SPIEGEL: There will be no euro bonds "for as long as I live," Merkel said last week. Why did she put it so drastically?

Oettinger: She wanted to state her position clearly and define a no-go zone. It enabled her to create the necessary latitude domestically for other concessions to euro partners. She has to take into account the fact that the majority of Germans and most economists are opposed to euro bonds. But she also knows that Germany can't always say no.

SPIEGEL: Do you believe that Merkel can sustain her tough stance against jointly issued bonds?

Oettinger: I thought that the chancellor's statement was authentic. Everyone can understand Germany's position. But of course Germany, as the largest beneficiary of the European domestic market and the common currency, has an interest in the heavily indebted countries in Europe remaining capable of taking action. In the reform process in which the EU finds itself, we will most certainly agree to further acts of solidarity.

SPIEGEL: You yourself said some time ago that euro bonds should be "considered as a final component of the euro rescue."

Oettinger: I think that euro bonds are conceivable, provided all other necessary conditions are met. As a member of the European Commission, I support the draft proposal for various types of euro bonds that we published at the end of last year. But first we have to transform the common economic and currency zone into a real political union.

SPIEGEL: To that end, the presidents of the European Council, the European Commission, the Euro Group and the European Central Bank have made extensive proposals. However, the German government promptly criticized the document, saying it was biased.

Oettinger: I feel that the proposals are an outstanding basis for engaging in the structural debate about tomorrow's Europe at all levels in the coming weeks. We are talking about a banking union, common economic policy, more democracy and democratic control and, ultimately, the founding of the United States of Europe.

SPIEGEL: You mention a banking union. Do you think it's right for German savers to be liable for Spanish or Italian banks in the future?

Oettinger: Yes, but only under two conditions. There has to be an effective European banking regulatory agency, and there also has to be a joint European deposit insurance fund ...

SPIEGEL: ... which would draw on the existing national deposit insurance funds?

Oettinger: That would probably not be the best solution. We should develop a European deposit insurance fund instead.

SPIEGEL: That would be another step toward a "liability union" among rich and poorer EU countries.

Oettinger: One shouldn't view rich and poor solely through the lens of the present. Germany is currently at the height of its economic performance. But we've also been the "sick man of Europe" before, namely prior to the labor market reforms of then Chancellor Gerhard Schröder.

SPIEGEL: The German government rejects the idea of a joint fund to pay off existing debts. What's your position on that?

Oettinger: Such a fund would only help Italy at the moment, because it has a debt ratio of 120 percent of annual economic output. Even Spain didn't think much of the idea, while other countries were completely opposed to it. But we always have to find solutions that are reasonable for everyone.

SPIEGEL: But the idea comes from the five members of the German Council of Economic Experts, an independent panel that advises the government in Berlin on economic matters. They aren't exactly considered dubious.

Oettinger: And the idea of a debt repayment fund isn't dubious, either. But is it the best conceivable approach? The fact is that it isn't just the Germans, but also the Dutch, for example, who are against it.

SPIEGEL: Another idea by the quartet of presidents is that no country can take on new debt without the approval of the other euro countries.

Oettinger: In essence, the 0.5 percent limit (on a country's structural deficit) in the fiscal pact already constitutes a ban on new borrowing. I would favor lowering that limit to zero. But if a country in extraordinary circumstances were in fact forced to borrow money, it would have to file a petition with the European Commission and the Euro Group.

SPIEGEL: How can we ensure that we don't lose democratic control by transferring further sovereignty rights to Brussels?

Oettinger: We'll need a two-chamber system in the future. The representatives of the countries could sit in the second chamber, based on the model of the United States Senate. And, incidentally, the European Parliament has to play a decisive role in all other deliberations on the amendment of our EU treaties.

SPIEGEL: German Finance Minister Wolfgang Schäuble believes the changes are so far-reaching that a referendum will be necessary.

Oettinger: First we have to design the new structures and then see what has to be done in terms of constitutional law. Under Article 146 of the German constitution, it will then be possible to present a new constitution to the people for a vote. 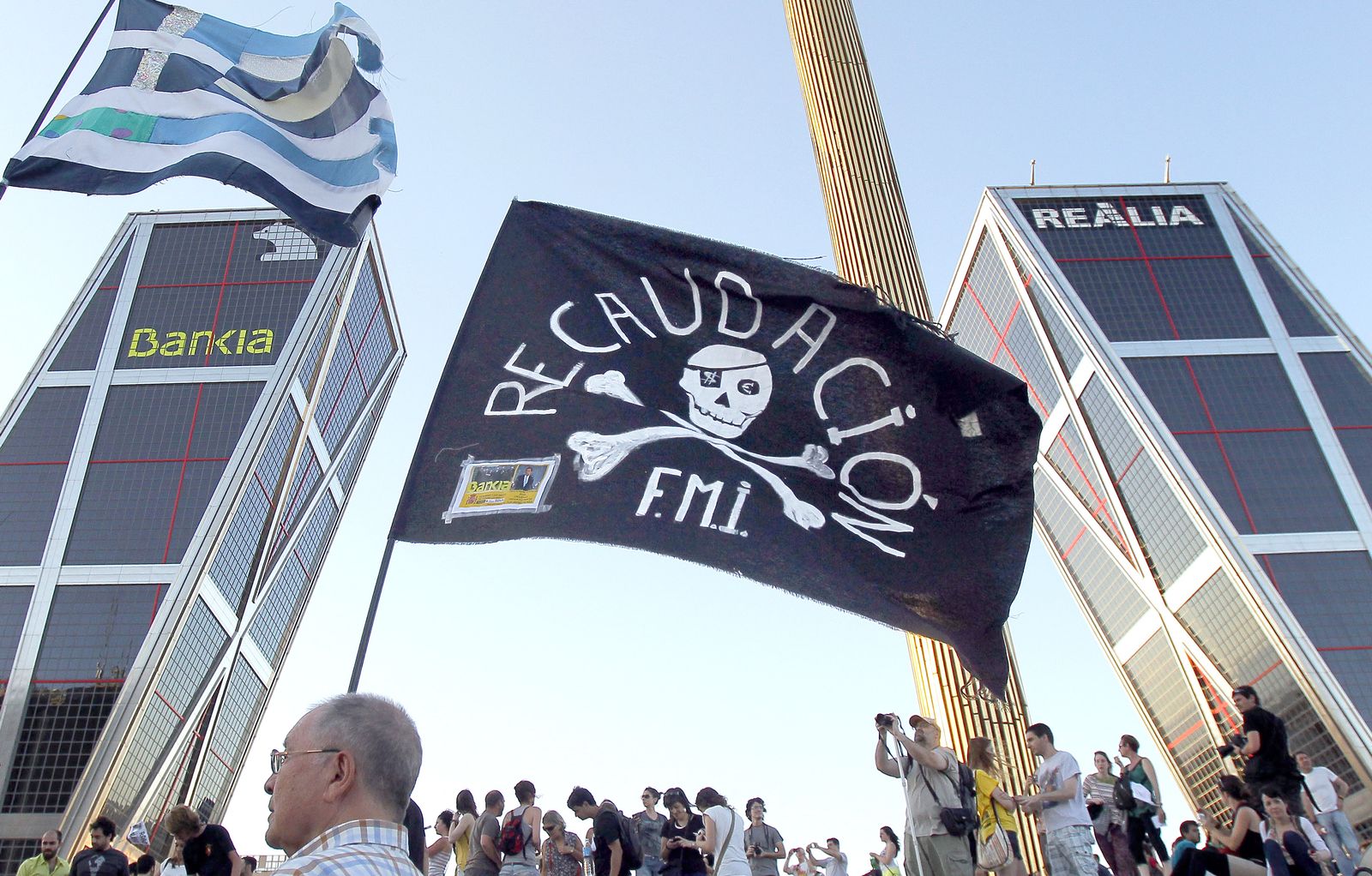 A protester waves a flag reading "fundraising for the IMF" at a demonstration in front of Madrid's Bankia bank.