SPIEGEL ONLINE: Mr. Markaris, Greece is deep in debt and workers are striking to protest strict austerity measures. What's going on with the Greeks?

Petros Markaris: Things aren't just going bad for the Greeks. They have been shaken to the core and terrified, and they don't know how to go forward from here. The government also deserves some of the blame for this because, for six months, it only discussed the issues and has only now announced its reform measures. This lack of action has had negative effects on the population and also kept the Greeks in the dark about just how bad things really were in the country. Another result is that there is now only a single way out of the crisis: If the country is going to be reformed, the Greeks must suffer.

SPIEGEL ONLINE: Between 2004 and 2008, the European Union gave tens of billions of euros to Greece. More than one-third of all Greek workers are government employees, and there are 14 public holidays, which is fairly generous. How is it that the Greeks were able to live beyond their means?

Markaris: Things haven't always been this way. I've lived in Athens since 1965. Until the end of the 1970s, Greece was a poor, though very respectable country. Then, in 1981, when Greek became part of the European Economic Community (EEC), it received a lot of money. The Greeks didn't know how to deal with it. People just didn't know what to do -- neither politicians nor ordinary people had a consciousness for it. From then on, various governments supported living on credit. Now we have reached a point where the population doesn't want to voluntarily do any belt-tightening and where the government can't manage its finances. I still doubt that the government seriously intends to implement the savings measures it has announced.

Markaris: This isn't the first horrible crisis that Greece has gone through. But it is the most hopeless and, in any case, it marks the first time that the population, the media and politicians have spoken openly about the issues. There are no more illusions.

SPIEGEL ONLINE: German Foreign Minister Guido Westerwelle has called on the Greeks to do their homework, and German industry is worried that the crisis in Greece might spill over into their country. Is Germany handling the situation in Greece the right way?

Markaris: Just like most of the other EU member states, Germany is busy trying to convince Greece that it needs to change some things. This is the correct thing to do, because we urgently need these reprimands. Greeks have not been offended by the German government's behavior.

SPIEGEL ONLINE: Still, Greek newspapers are warning that there might be anti-German hysteria. After the German newsweekly Focus ran an image of the Venus de Milo statue on its cover making an obscene gesture with the headline "Swindlers in the Euro Family," a Greek consumer advocacy group called for a boycott on German goods. And Theodoros Pangalos, Greece's deputy prime minister, has said that the Germans took Greece's money and gold during their World War II occupation of the country but have refused to pay reparations.

Markaris: The whole flap is only directed at Focus, which was the sole cause of the big blowout. I also find the magazine's front-page image a bit unpleasant, but the reaction of Greek politicians has been wildly exaggerated. In the end, it really only has to do with a report in the media and not with something that a German politician said. I've always been amazed that Greeks are more sympathetic toward the Germans, who once occupied their country, than they are to their liberators, the Americans and British. But now that's changing. I'm afraid that German-Greek relations have been damaged, and it's something I regret very deeply. Whenever the Greeks are distressed -- like now -- they grab on to nationalism. Unfortunately, that's just the Balkan mentality.

SPIEGEL ONLINE: According to Transparency International, the average Greek pays over €1,000 each year in bribes for personal reasons. Over the last two years, these figures have jumped sharply. Greek crime fiction also features a lot of fakelakis, envelopes bulging with bribe money. What role does corruption play in everyday Greek life?

Markaris: Corruption permeates all of Greek society. If the only way to get swift treatment in a Greek hospital is to bribe someone, it is really a problem of the state. Even the respectable citizen has given up hope and believes that evading taxes is justifiable. As he sees it, that is the only way to get his money back. From this arises a society in which everyone shares in the guilt. The mentality in Greece needs to be radically reformed. I'm worried that only the symptoms of the crisis -- and not the causes -- will be cured now.

SPIEGEL ONLINE: What is there left for the Greeks to save?

Markaris: We need a completely new state apparatus, a well-functioning civil service and anti-corruption laws. The government's most recently announced reform measures do provide some cause for hope, but they need to be implemented in a strict fashion. Otherwise, we'll just have another crisis five years down the road.

SPIEGEL ONLINE: Where do things go from here?

Markaris: Greece is lucky that it still has a minority of active and productive people, who are to thank for the fact that the country didn't go broke earlier. But this minority is at the end of its rope. Either we are leaving, they say, or the EU must take drastic action and change something. The only way Greece is going to work its way out of the crisis is if the EU or the IMF succeed in rigorously monitoring it. In Greece, we need a drastic treatment. 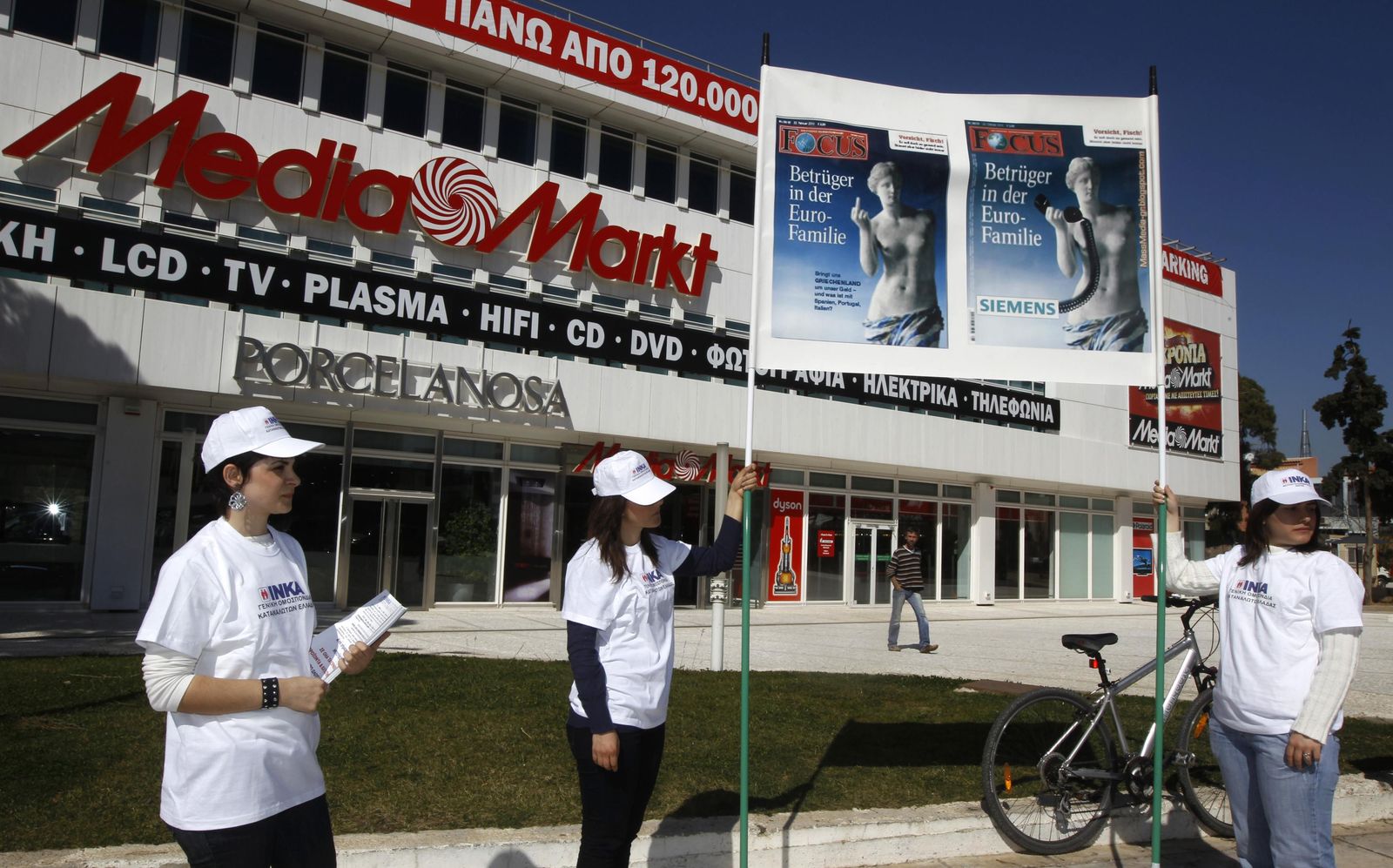 "Swindlers in the Euro Family": Many in Greece are boycotting German companies like consumer electronics chain MediaMarkt, pictured here, over the heavy-handed treatment their country has been given by the media in Germany.