Editor's Note: This interview was conducted on Thursday, Feb. 5 in the Greek Embassy in Berlin.

SPIEGEL: Mr. Varoufakis, you have referred to the European Union's bailout policy for Greece as "fiscal waterboarding." What exactly do you mean by that?

Varoufakis: For the past five years, Greece has been subjected to austerity measures that it cannot, under any circumstances, meet. Our country is literally being pushed under water. Just before we suffer an actual cardiac arrest, we are granted a momentary respite. Then we're pushed back under water, and the whole thing starts again. My aim is to end this permanent terror of asphyxiation.

SPIEGEL: Do you really think "waterboarding" is an appropriate metaphor for a rescue package?

Varoufakis: Well, it managed to get your attention, didn't it? So it worked.

SPIEGEL: You are comparing a rescue package with a form of torture the CIA used on prisoners. But Greece was showered with money, not water.

Varoufakis: That money was used to bail out banks, especially banks in Germany and in France, to prevent them from taking losses.

SPIEGEL: Greece would have become insolvent long ago if it hadn't received help.

Varoufakis: The truth of the matter is that 90 percent of that money never arrived in Greece.

SPIEGEL: Going back to your metaphor, who is the torturer that keeps pushing Greece under water?

SPIEGEL: You are talking about officials who were sent there to do their job.

Varoufakis: And fine people they were. But they were sent to implement a program that caused great damage. We know there were also some pretty good guys in the CIA who took part in the waterboarding interrogations against their will and ended up in awful moral dilemmas.

SPIEGEL: You have also drawn comparisons between the rescue policy and the mafia. In your blog, you responded to a by-lined article by German Finance Minister Wolfgang Schäuble by comparing the tactics of EU policymakers to those of "Chicago gangsters." Do you really think that is appropriate?

Varoufakis: I have never even remotely referred to Mr Schäuble as a gangster. I wrote that the so-called bailout packages were actually a masked threat on the lines of: "I'm going to make you an offer that you can't refuse."

SPIEGEL: During the Greek election campaign, Germany was repeatedly portrayed as a power oppressing Greece. What would Germany's interest be in doing that?

Varoufakis: I always rejected, and still reject, the notion that Germany is oppressing Greece.

SPIEGEL: You say that the austerity measures advocated by Angela Merkel are destroying Greece.

Varoufakis: That is an entirely different matter. Your questions seem intent on creating the impression that Greece is trying to fuel strife in Europe. I cannot and will not accept such insinuations. In my position as finance minister, it is my duty to counteract any hard feelings harbored against Germany in Greece. I am arguing on an entirely objective level. I am saying that the austerity measures have done nothing and will do nothing to solve Greece's problems; in fact, they only make things worse. I would therefore like to see Germany participate in drawing up a kind of Marshall Plan to rebuild Greece and the rest of the periphery. I believe that a Merkel Plan for Europe would be a wonderful development.

SPIEGEL: Your government is currently overturning reforms that were designed to help the Greek economy get back on its feet. You have reemployed laid-off public-sector workers and put privatizations on hold.

Varoufakis: No, you are misinformed on this point. We are overturning none of the therapeutic reforms. We are not stopping the privatization of our ports. We just want to make sure that our country's national assets are not sold off for peanuts.

SPIEGEL: What is the point of re-employing sacked public-sector workers?

Varoufakis: We have reversed some terminations where these made no social or economic sense or where the process was illegal. Let me give you an example: The previous government sacked school security guards whose job it was to protect our schools. The resulting damage caused by the theft of school computers and vandalism is far greater than the amount saved by the sacking of the guards.

SPIEGEL: You have formed a coalition government with the right-wing populist Panos Kammenos and his party Independent Greeks. Why?

Varoufakis: I hereby declare that I, Giannis Varoufakis, oppose every form of xenophobia, anti-Semitism and sexism. And I will find it deeply distressing if any member of our government expresses a different opinion on these matters. Unfortunately, the austerity measures in many European countries have resulted in a great increase of popular support for right-wing narratives. I see this as a great danger for Europe.

SPIEGEL: Why form a coalition with these people then?

Varoufakis: That is simply how democracy works. We would have preferred to have an absolute majority, but the Greek voters decided differently.

SPIEGEL: You had alternatives, like the left-wing liberal party To Potami (The River).

Varoufakis: It was in our national interests, and in the interests of Europe, to form a government as quickly as possible. Long, drawn-out coalition talks would have been disastrous. Additionally, let me inform you that To Potami rejects that it is left-wing.

SPIEGEL: During the election campaign, your coalition partner Kammenos, who is now Greece's defense minister, said that Europe is being governed by German neo-Nazis.

Varoufakis: That is an opinion I absolutely do not share.

SPIEGEL: You owe your current position to your coalition partner Mr. Kammenos. He brought you to power.

Varoufakis: That's not correct. It was the Greek voters who brought us to power.

SPIEGEL: Right-wing demagogues are gaining ground in Germany too, but not because of austerity measures. On the contrary, they claim that the Greek bailout is costing German taxpayers too much money.

Varoufakis: The Germans should know that their money bailed out the banks, not Greece. And I share their opinion that that was a wrong move. That money has disappeared in black holes. In the future, we should make sure that it is invested sustainably.

SPIEGEL: In contrast to Spain and Portugal, Greece has already benefited from a debt cut. Can you understand that there is a certain reluctance to pour even more money into your country? Greece seems like the proverbial bucket full of holes.

Varoufakis: We aim to plug those holes.

SPIEGEL: Above all, you want another substantial debt cut.

Varoufakis: Everyone knows that Greece will never be able to shoulder its current debt load without a new deal. And it would be to the benefit of all parties concerned if they would simply admit this fact. A debt restructure would put the Greek economy in a position in which it could begin to recover. And that would be in the interests of the people in Germany and in the rest of Europe too.

SPIEGEL: Your negotiations with Brussels have thus far produced no results and the German government has ruled out the possibility of an additional debt cut for Greece.

Varoufakis: I understand that the German government is keen to avoid the phrase "debt cut." But the fact is, it would be better, and in the final analysis, come a lot cheaper for the creditors, than extending the loans and pretending that no losses will be suffered if only income-destroying austerity continues. 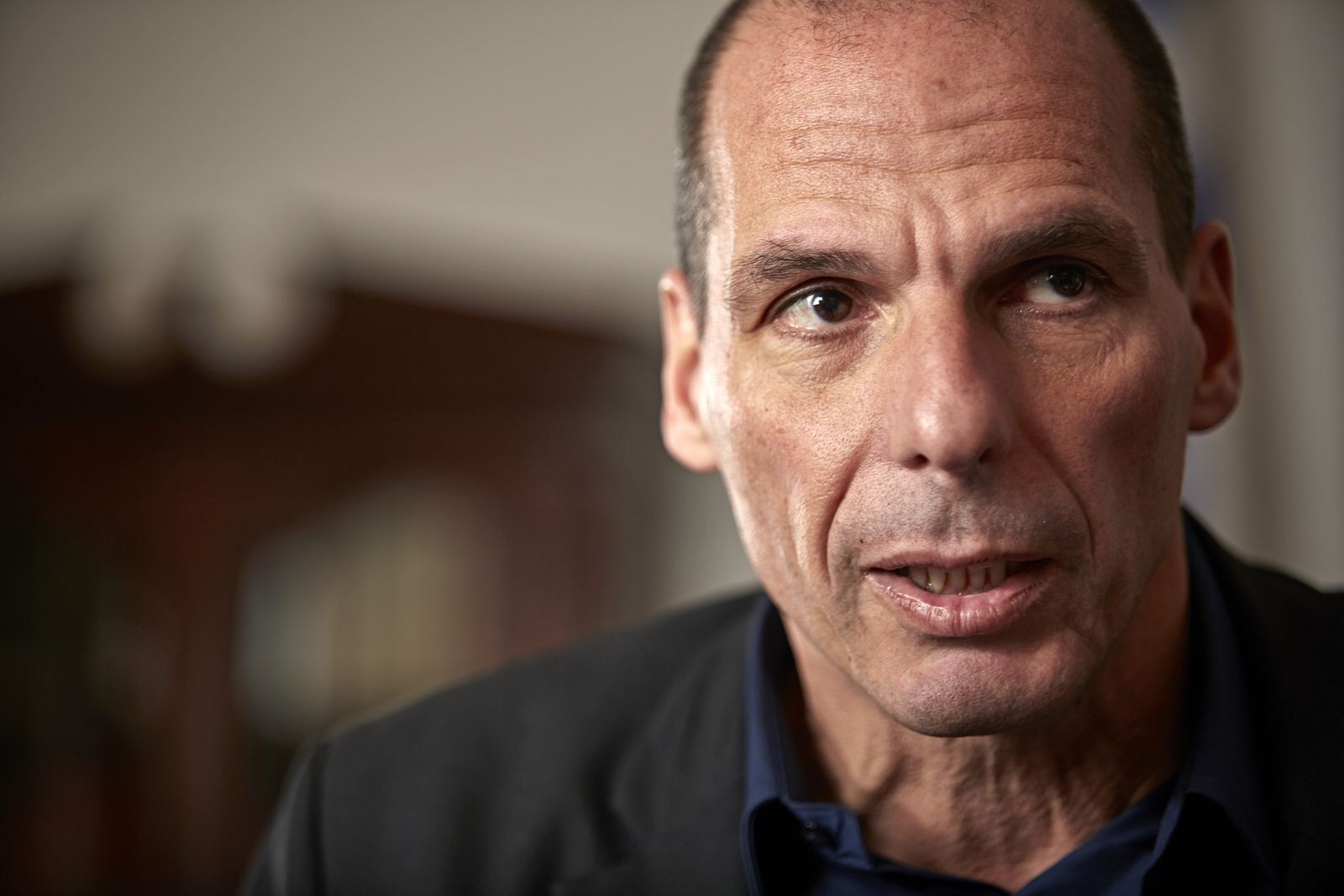 Greek Finance Minister Giannis Varoufakis: "The truth of the matter is that 90 percent of that money never arrived in Greece." 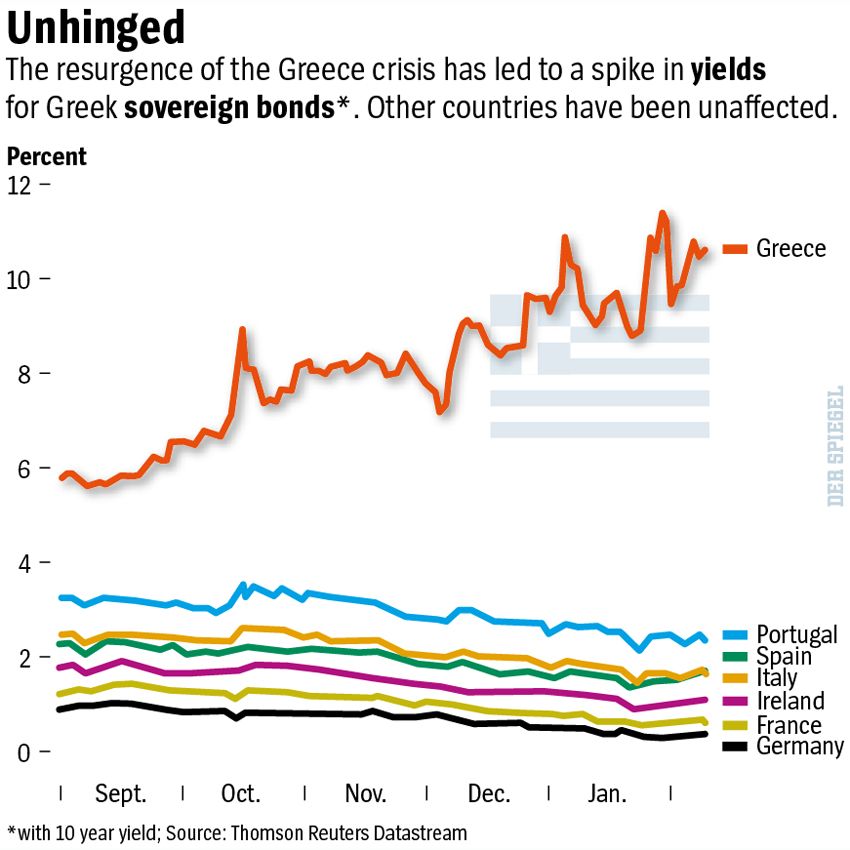