Dora Bakoyannis: I think hate is too harsh a word. Young people are always very sensitive and react with particular sensitivity to injustices, and this is where Greek young people are not much different than those in other European countries. Such a tragedy like the death of a 15-year-old from a police bullet is of course a shock. So it is easy to get young people onto the streets. 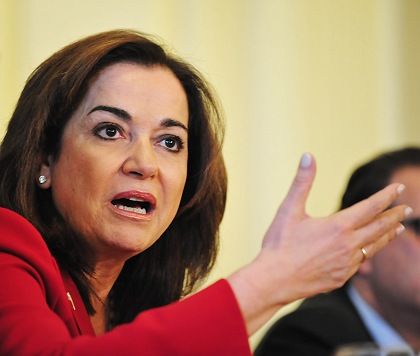 SPIEGEL: The protests have been more than just an outpouring of anger and grief. In Athens alone, block after block has been devastated. Were the riots politically driven?

Bakoyannis: It is hard to say what came into play here. There were certainly criminals involved who simply created havoc and took advantage of the situation. But of course the grief was compounded for many by the fact that we live in very difficult economic times. The financial crisis and its effects, which our children are confronted with on a daily basis, have triggered insecurities and fears of the future. This heightens their feelings of unease with regard to the state -- and young people have reacted. This is not the first time that we have seen this, and in other large European cities there have been similar incidents.

SPIEGEL: You don't seem particularly surprised. Perhaps this is because you were the mayor of Athens from 2003 to 2006?

Bakoyannis: I expected something like this would happen sooner or later. We have a group of people with ultra-leftist ideologies, the active Black Bloc anarchists. There have recently been repeated clashes with them. As of late, their organization has been improving and becoming more flexible, they are using the Internet and text messages. At the same time, we have to weather difficult reforms. That is the deeper reason for the protests, this is why the anarchists have suddenly been joined by disgruntled young people.

SPIEGEL: Why have the police reacted in such a restrained and passive manner?

Bakoyannis: The police have not reacted passively, rather they have sought to de-escalate the situation. The government decided that it would rather accept material damage than new casualties and victims.

SPIEGEL: Over the past few months, there have been mass demonstrations by students, violent protests by dock workers, roadblocks by farmers and a series of general strikes. Is the government still politically capable of functioning?

Bakoyannis: Of course. You have to differentiate between the reactions to our economic reforms, which are understandable, and the current protests. The reforms are urgently needed. Greece needs investments and jobs that will be secure over the long run. We need privatizations and we needed the educational reforms introduced last year. You cannot have radical reforms without some reaction from those affected.

SPIEGEL: The protesters want to force the government to resign and they enjoy a great deal of support among the population. Are new elections unavoidable?

Bakoyannis: There were elections just last year and the Greeks knew exactly what they wanted. They also know that we need reforms. If we want to bring our economy and the country up to the level of the European Union, the government has to continue. 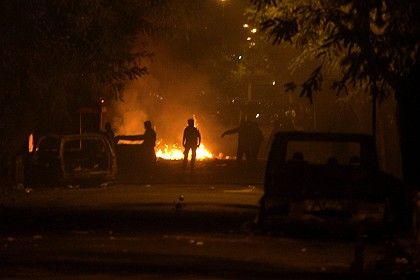 Violent protests in Athens continued over the weekend. Here, rioters outside the Athens Polytechnic on Saturday.

SPIEGEL: The situation is also difficult on the foreign policy front. Due to a name dispute, Athens is single-handedly trying to block Macedonia's acceptance into NATO.

SPIEGEL: The NATO membership of the Former Yugoslav Republic of Macedonia ...

Bakoyannis: That is much more correct. Our demand that Skopje resolve the name dispute is backed by NATO and the United Nations. It is not true that we are stubbornly rejecting a compromise or reacting sentimentally. But a compromise is important to the security and stability of the region.

SPIEGEL: All over a name, which has forced Skopje to take Greece before the International Court of Justice?

Bakoyannis: Taking your case to court doesn't automatically make you right. We can't accept a country that simply wants to preserve yesterday's Balkans political logic and is now dreaming of a Greater Macedonia. The current rhetoric of the government in Skopje does not allow for good neighborly relations.

SPIEGEL: Just a few weeks ago there were clashes in the capital between police and immigrants. Will Athens be confronted by a new problem with violence, similar to what we last saw in the Parisian suburbs?

Bakoyannis: At the time, there were no riots in Athens like the ones we're seeing today. Those were exaggerations by the media. Actually, we are very proud of our integration achievements. Immigrants make up more than 10 percent of the population and we have managed to assimilate them positively. We know what it means to be a guest worker and an immigrant.

SPIEGEL: In Greece there are currently also up to a million illegal refugees, and many want to continue on to other European countries.

Bakoyannis: We need enhanced security for our external borders, everyone in Europe agrees on that. But the harsh criticism of our immigration policy is very unfair. Don't forget that we have more than a thousand islands, and the longest external border in the EU. We therefore urgently need a joint European coast guard. We cannot manage this alone.