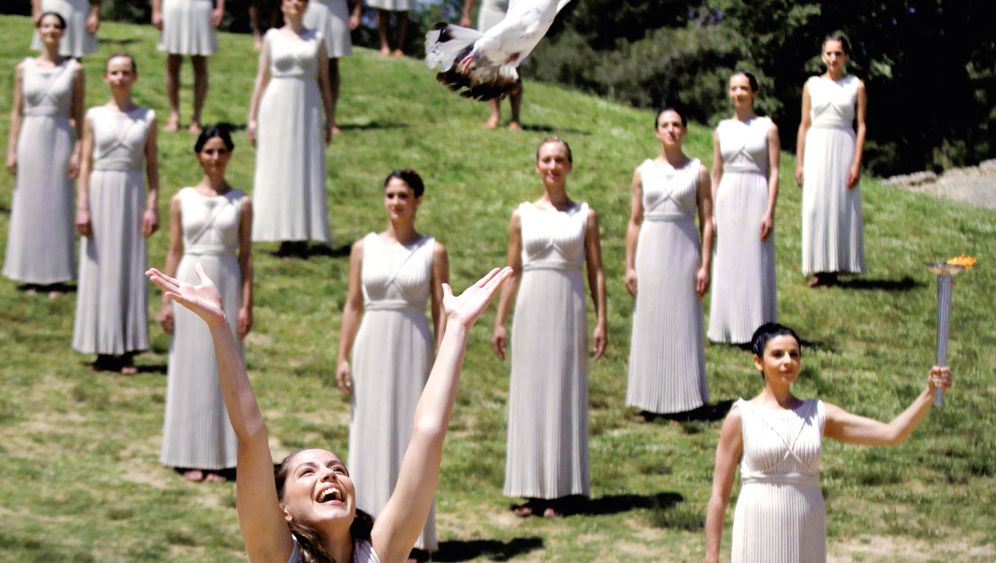 Thirty-seven years ago, Nikos Dimou, who is now 76, wrote a book of aphorisms titled "The Misery of Being Greek," which was published in 1975. In the book, he wrote that a Greek does "everything he can to widen the divide between desire and reality."

For this interview, he invited SPIEGEL to his apartment in Athens' leafy embassy district. The air smelled of jasmine, a sprinkler watered the lawn outside and Dimou's three-legged cat, Azurro, was asleep on the sofa. Dimou, who studied in Munich, served the reporters coffee and cake, despite his recent frustration with SPIEGEL. Like many people in Greece, he was hurt by the magazine's recent cover about the Greek crisis, which bore the headline "Acropolis Adieu!"

SPIEGEL: Mr. Dimou, you have studied the Greek soul more thoroughly than almost anyone. One could say you've practically dissected it. How is the Greek soul doing right now?

Dimou: The prevailing feeling is one of uncertainty. Greeks no longer feel confident, which partly has to do with their history. They have certainly suffered a great deal. But uncertainty also leads to aggression. We Greeks love conspiracy theories -- they help to explain and substantiate our uncertainties. That's why we don't only think with our heads and our reason, but also with our emotions. You must remember, even in the ancient world, learned Egyptians referred to the Greeks as "children." But this immaturity also has a kind of beauty to it.

SPIEGEL: And you truly believe that Greece's history continues to determine your fellow Greeks' behavior to this day, in the current crisis?

Dimou: Yes, without a doubt. Modern Greeks will always suffer from knowing what the ancient Greeks accomplished, which we can neither forget nor surpass. My theory is that the Greeks suffered culture shock when they were catapulted from feudal conditions to modernity within the space of a few years in the 19th century. Being caught somewhere between east and west, ancient glory and present poverty, between orthodoxy and enlightenment, has left the Greeks with an identity problem. That's what makes them unsettled and uncertain to this day. They always feel under threat.

SPIEGEL: Does that mean Greeks never entirely arrived in Europe?

Dimou: Greeks weren't free for a long time. First they were part of a multinational empire that spoke many different languages. Then they lived under Turkish rule for 500 years. Then all of a sudden they had to become Europeans, importing all these institutions. The result is that, to this day, Greeks don't have a good relationship with their government.

SPIEGEL: And why is all of this so important?

Dimou: It's important if you want to work together with the Greeks, or to reform their country. Then you need to know just what deeply rooted fears torment the Greek soul. I believe these fears resurface especially in crisis situations such as the one we currently have. Then Greeks, traditionally so hospitable, suddenly start to view others as enemies who've come to steal their souls.

SPIEGEL: Do you think it was this mixture of uncertainty and aggression that caused the election results on May 6, where voters punished the mainstream parties for their support for austerity?

Dimou: Yes, absolutely. But the results also have to do with the way Greeks allow their feelings free reign when it comes to politics. Take Alexis Tsipras, for example, the head of the left-wing coalition Syriza. He's young, he's good-looking, he's optimistic. People believe nothing bad can happen if they follow him, because he has such confidence. At the same time, everyone knows not even Tsipras can perform magic. Still, they voted for him, acting on a feeling. I hope the parliamentary elections on June 17 take a more rational course.

SPIEGEL: It doesn't particularly look that way at the moment.

Dimou: In the election in May, 35 percent of Greeks abstained and 19 percent voted for small parties that didn't make it into parliament (ed's note: because they failed to clear the 3 percent hurdle). Together, that makes 54 percent whose votes can't be predicted this time. I'm counting on many people being more cool-headed now. Tsipras will receive still more votes, but not enough to form a government. Then we might end up with a coalition of pro-EU parties: New Democracy, PASOK and smaller parties.

SPIEGEL: Are people in Greece aware that this election will also amount to a vote for or against the euro?

Dimou: If we fail to meet austerity requirements, we'll lose the currency as well. You can't have one without the other. I hope that's made many people stop and think. This is not an election between right and left, but between the euro and the drachma. If the parties would express it that way, then we would already know the results: 78 to 81 percent of all Greeks want to keep the euro. Unfortunately, though, not only does the word "democracy" come from Greek, but also the word "chaos."

SPIEGEL: And the word "dilemma."

Dimou: Yes, all of that is very characteristic of the Greek mentality. It will take generations to change. I hope, though, that we can survive this crisis with the EU's help. Of course, there's also the other scenario that could play out here, one where everything falls apart and we start again from the beginning.

SPIEGEL: Does that scenario scare you?

Dimou: Yes. When I saw SPIEGEL's "Acropolis Adieu" cover, it gave me the feeling I was simply being thrown out of the EU. That was a shock. I may not be a representative example, but I've always felt myself to be a European, a European who comes from Greece. After seeing your cover, I felt as if I were on a ship pulling away from the shore, with Europe disappearing slowly but surely on the horizon, and I was being banished.

SPIEGEL: You found it overbearing of SPIEGEL to print such a cover?

Dimou: It was a brutal move in a very sensitive situation. You know, the Acropolis is something holy for Greeks. And for us that made your cover, as soccer players would say, a foul.

SPIEGEL: More than 30 years ago, you said in a SPIEGEL interview that in difficult moments of their history, Greeks always seek fault with others and never with themselves.

Dimou: That's still true. When you talk to people here, they say, this Angela Merkel, this Schäuble (ed's note: the German finance minister), why did they do this to us? I respond, "What does Merkel have to do with us? Nothing. We ran up these debts and asked the EU for help. That's why they're here." Then the person I'm talking to usually replies that the Europeans are making good money off all this, or that it's a conspiracy against Greece by the banks or by global capitalism.

SPIEGEL: Which could reflect another Greek trait you describe in your book, the tendency to overdo things.

Dimou: Precisely. We like to live beyond our means. You see this zest for life if you read (Nikos Kazantzakis' novel) "Zorba the Greek" -- we want to have everything, enjoy everything. The tendency to overdo things is also closely connected to a tendency toward repression. Greece is the home not only of democracy, but also of tragedy. The tragic hero is a person who overreaches himself, and violates the natural order of things.

SPIEGEL: Can Germans and Greeks ever hope to get along, despite their differences?

SPIEGEL: Looking back, what did Germany do wrong in its attempt to rescue Greece?

Dimou: First of all, the majority of the blame lies with Greece's politicians, who caused this crisis and failed to react to it quickly enough. They also failed to explain to people how serious the situation was. Instead, they once again put the blame on others, claiming, "Yes, these measures are barbaric, but they're being forced on us by the IMF, the EU and the ECB -- the troika." Beforehand, though, they told EU representatives, "We need these measures, please give us the money." They were playing two-faced politics. I believe that more than anything, the Greek people are victims of a political elite.

SPIEGEL: Even so, surely Germany and the EU could have done certain things better.

Dimou: I think they introduced the wrong measures -- far too many austerity programs, ergo the current danger of deflation. But there have also been communication problems. The troika never really explained to Greece its ideas and its approach to finding a solution. They didn't have a spokesperson who could have tried to truly engage the Greek people in a conversation, not as a representative sent from the command center of some Fourth Reich, but as a member of a group of people who want to help the country. Instead, they behaved like authoritarian bureaucrats, arriving every three months, issuing orders and leaving again, never bothering to stick around.

SPIEGEL: But Greece is already complaining that far too much is dictated from outside.

Dimou: I remain convinced that the procedure simply needed to be explained better. I understand why many Greeks felt they were living under German or EU occupation, even if I don't share that view. A considerable opportunity was lost through the way the troika acted and the way its role was exploited by Greek politicians. Anyone looking to introduce Greece to a different mentality needs to proceed very carefully, or they quickly end up achieving the opposite effect.

SPIEGEL: Then on top of it all, there were rebukes being issued from Berlin.

Dimou: Yes, Wolfgang Schäuble was always wagging his finger like a schoolteacher, saying the Greeks had misbehaved. Merkel was somewhat more humane, but still very Protestant in her strictness, applying the concept of guilt. They could have seen that wasn't the way to achieve the desired result. It was simply the wrong approach.

SPIEGEL: What do you predict for the upcoming parliamentary election?

Dimou: I'm not going to venture a prediction at this point, although that in itself is something of a prediction. But I hope very much that we can find a way out. Greece leaving the euro zone would be a heavy blow, and not only for Greece. Ultimately, Europe without Greece would be a weaker Europe, with a piece of itself missing. I'm always trying to explain to my fellow Greeks why it can't possibly be in their interest that we lose the euro. Much like a psychoanalyst, I advise the Greek patient to take a very rational look at things this time.

SPIEGEL: And how long will your psychoanalytical treatment take?

Dimou: That depends on the patient. If he responds in a typically Greek way, he won't even show up for the second therapy session.