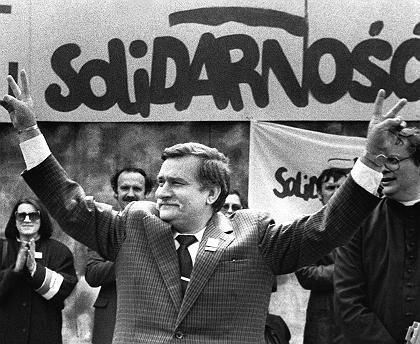 Former Polish President and leader of the Solidarity movement Lech Walesa is once again facing accusations that he worked with the Polish secret police.

The rumors just won't go away. Over and over again, legendary figures from Poland's past have been accused of collaborating with the Communist secret police. On Monday, the latest in a long line hits Polish bookstores: a 780-page tome that purportedly proves Solidarity trade union leader and former Polish President Lech Walesa was a secret police informant from 1970 to 1976.

The claims aren't new. In 2000, Walesa won the first of several court cases against people who claimed he was a spy. Yet the authors of "The Secret Police and Lech Walesa," both of whom work as historians at the government-affiliated Institute for National Remembrance, or IPN, say they have uncovered compelling new evidence that Walesa collaborated with Communist officials under the code name "Bolek."

A number of voices have spoken out on Walesa's behalf, including former secret police officials who say that files were routinely falsified. A deputy director of the IPN, Maria Dmochowksa, said publicly the book was part of a witch-hunt and shouldn't be published under the institute's name.

Furthermore, the leader of the IPN, Janusz Kurtyka, has been accused of being close to Polish President Lech Kaczynski and his twin brother, former Prime Minister Jaroslaw Kaczynski. The Kaczynskis have stirred up many in Poland by aggressively pursuing former Communist party bigwigs in the country and have long been in a running feud with Walesa.

SPIEGEL spoke with Slawomir Cenckiewicz, one of the book's co-authors, about the evidence and the controversy.

SPIEGEL: This Monday your book "The Security Service and Lech Walesa" comes out. It has already sparked an intense debate. In it, you and your co-author Piotr Gontarczyk claim that the hero of the Polish reform movement collaborated with the secret police in the 1970s. Do you have proof?

Cenckiewicz: We provide clear evidence in our book including registration cards, notations, notes from the secret police and reports from the so-called informant "Bolek." There's positive proof that Lech Walesa was registered with the secret police under that code name between 1970 and 1976.

SPIEGEL: Walesa has emphatically denied that, and says the Bolek file is a forgery. How can you be sure the secret police didn't fabricate the documents to paint the union leader in a bad light?

Cenckiewicz: We know the secret police's methods, and the way the archive and registry were run -- that's how we know. We've also found evidence from the Bolek file cited in other files.

SPIEGEL: Those could also have been forged.

Cenckiewicz: These files still had their original seals and it could be proven that they hadn't been opened since the 1970s. Manipulation is out of the question.

SPIEGEL: Assuming for a moment that Walesa was in fact Bolek as you allege, how much damage did he do?

Cenckiewicz: We describe the fate of people who Bolek informed on. We've come across seven such stories. The rest were destroyed or stolen from the files. But it's clear that Bolek informed on more than 20 people who were later harrassed or oppressed.

SPIEGEL: According to a recent poll, more than 40 percent of Poles believe Walesa could have been a secret police informant. But a majority still say that doesn't diminish his accomplishments. Do we have to re-evaluate the legendary union leader's legacy?

Cenckiewicz: We're historians and above all want to write about what was. Our book doesn't deal with legacies. It also wasn't our goal to destroy a legend. We consider Walesa to be a national symbol. He led Solidarity and remains an icon. But he also worked with the secret police under the name Bolek. The truth isn't always simply black and white.

SPIEGEL: In 1976, the secret police decided to stop working with their informant Bolek because he wasn't cooperative enough. But Walesa was a massive danger to the entire Communist system in the 1980s: He led the Solidarity trade union and won a Nobel Peace Prize in 1983. Wouldn't it have been easy for the secret police to make his file public and embarrass Walesa in front of his supporters abroad?

Cenckiewicz: The secret police tried in the 1980s, but it didn't really work.

SPIEGEL: Why not, if the evidence is as clear as you claim?

Cenckiewicz: Walesa was a national hero, a true icon. The vast majority of Poles didn't believe a word the authorities said. They took everything the official media said about Walesa to be a manipulation by the Communist authorities.

SPIEGEL: The other major claim in your book is that Walesa tried to clean out his file when he was president of Poland in the early 1990s.

Cenckiewicz: For me that's the saddest chapter. He was the first freely elected head of state since World War II, but he used his office to remove incriminating secret police files.

SPIEGEL: Walesa has also strongly denied this accusation. What proof do you have that he did this, or at least ordered it done?

Cenckiewicz: Some of the documents have his signature, a date and the note "I have borrowed this file." Others have the signature of some of his closest co-workers, for example former Interior Minister Andrzej Milczanowski, requesting the documents on his behalf. Walesa endorsed the request. Later it turned out some of the files were returned incomplete. The new, post-Communist secret service took note of that.

SPIEGEL: Poles have long been discussing how the fall of Communism should be remembered. The camp around the Kaczynski twins argues that the country missed the chance to confront its secret police past, and that has led to old networks being re-established in the new Poland. Do you worry that your book will be politicized as part of this debate?

Cenckiewicz: We don't take part in such discussions, we reject talks with politicians and we do everything possible to keep out of the political debate.