DER SPIEGEL: Mr. Minister, Chancellor Angela Merkel would like to return asylum-seekers who were registered in Italy, but who traveled onward to Germany, back to Italy. Is that okay with you?

Salvini: Ms. Merkel said that Italy should not be left alone. Now, the consequences must be drawn. We are in second place behind Germany when it comes to the number of refugees we have accepted. We have accumulated more than 140,000 asylum cases, we cannot take on a single additional case. On the contrary, we'd like to hand over a few.

DER SPIEGEL: With that position, you may be contributing to the end of Merkel's tenure as chancellor.

Salvini: We need reliable partners in Germany. Personally, I don't want to witness a crisis there or see the government fall. Even if our political views -- and not just on the refugee question -- are quite far apart. The same is true on economic policy, banking reform and the German foreign trade surplus.

DER SPIEGEL: Do you have a direct line of communication with the chancellor?

Salvini: No, I haven't yet had that honor. I speak with Interior Minister Horst Seehofer.

DER SPIEGEL: You have spoken of your agreement with Seehofer and with your counterpart from Austria. Yet both would like to send refugees back to Italy.

Salvini: That's true. Both speak of protecting the borders and of rejecting those who have no right to asylum. But our common goal isn't just that of imposing a distribution of refugees on Brussels, but especially that of protecting the EU's external borders. A system like the one with Turkey in the southeast should be put in place in southern Europe too.

DER SPIEGEL: Your agreement with the German interior minister, in other words, is limited to the protection of the external borders. What about his desire to send back refugees to Italy?

Salvini: We don't need anyone coming to us. We need people to leave our country.

DER SPIEGEL: Have you spoken about that with Mr. Seehofer?

Salvini: No, but Prime Minister Giuseppe Conte has the mandate to declare that Italy's problem is more that we have an overabundance -- we have no need for returns. On that issue, our position will be completely clear.

DER SPIEGEL: Who in the Italian government will decide the country's position at the EU summit in Brussels at the end of June?

DER SPIEGEL: Are you serious?

Salvini: Yes. Luigi Di Maio and I are in complete agreement with him. He has the mandate to say "yes" or "no" in Brussels, to participate or to stand up and leave.

DER SPIEGEL: Yet everybody says that you are the most important member of the government.

Salvini: You are overestimating me. We shouldn't exaggerate.

DER SPIEGEL: What will the Italian government's position be on the refugee issue?

Salvini: We, the Interior Ministry and Foreign Ministry in addition to the prime minister, have drafted a dossier for the preparatory meeting on Sunday which Giuseppe Conte has in his possession (Please note: This interview took place prior to last Sunday's mini-summit on refugees, called by Angela Merkel). But he is not flying to Brussels with a mission that he must fulfill. He has free rein -- free rein to say "no" if he sees fit.

Salvini: Yes, but contrary to the past, Italy's ultimate agreement isn't guaranteed from the outset.

DER SPIEGEL: Is there still room for negotiating?

Salvini: We are prepared to negotiate, item by item.

DER SPIEGEL: How does your position on the refugee issue fit with the French-German drafts, parts of which have already been made public?

Salvini: Drafts that are written in advance by other countries and then emailed around do not conform to our way of working. Either such a thing is done together or not at all. Furthermore, I don't like the order in which things are addressed. The focus in the draft document is primarily on the immediate deportation to Italy of those who originally landed on our coasts. And only then is the future protection of our external borders addressed. For us, though, the priorities are exactly the other way around.

DER SPIEGEL: What is the core of the conflict?

Salvini: When someone in the EU says the Italians should first take care of everything and then we'll help, then I say: First you help and then we can talk about the rest, about distribution of refugees but also about the banking union, sovereign debt, etc.

DER SPIEGEL: You say that the ships operated by NGOs, including several from Germany, should disappear from off the coast of Libya?

Salvini: Definitely, yes. They support the migrant traffickers and boost the incentive to risk a crossing.

DER SPIEGEL: And who should then do the work being done by the NGOs?

DER SPIEGEL: Does Italy consider itself to be part of the "Axis of the Willing?" Would you also be in favor of installing the first control points in non-EU countries in the Balkans?

Salvini: You mean establishing hotspots not just in North Africa but also in the Balkans? Yes.

DER SPIEGEL: You recently called French President Emmanuel Macron "arrogant." Why are you upset with him?

Salvini: The French lectured us on morals, and yet according to the statistics, they should long since have accepted 9,000 asylum seekers from Italy. Still today, armed border guards are marching to the border with Italy, in Ventimiglia. It is their right to do so - if they would just stop lecturing us.

DER SPIEGEL: It currently looks as though the EU will be more divided than ever at the upcoming Brussels summit. Does that worry you?

Salvini: In the coming months, it will be decided if Europe still has a future in its current form or whether the whole thing has become futile. It's not just about the budget for the next seven years. Next year will see new European Parliament elections. Within one year, we will see if united Europe still exists or if it doesn't. 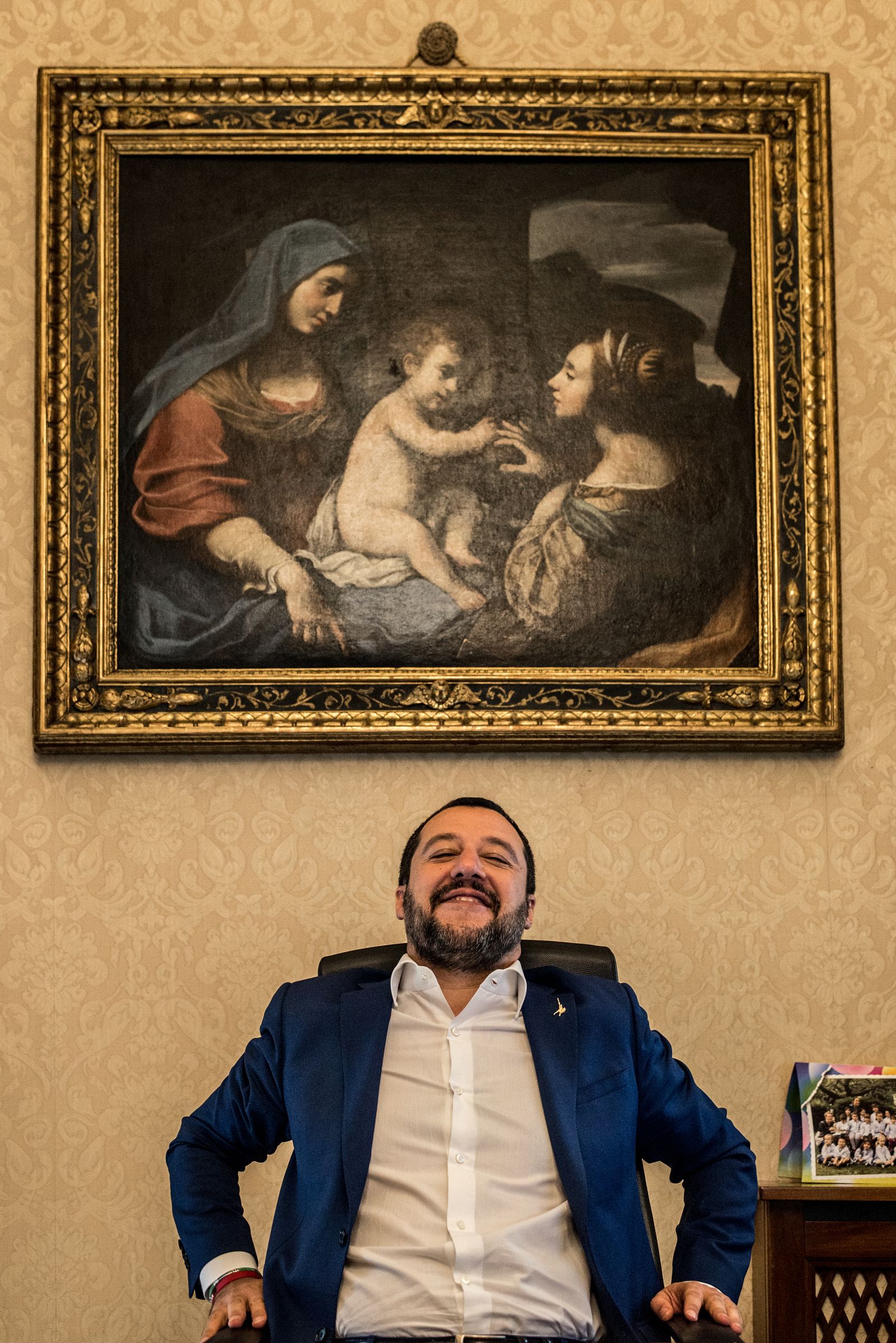 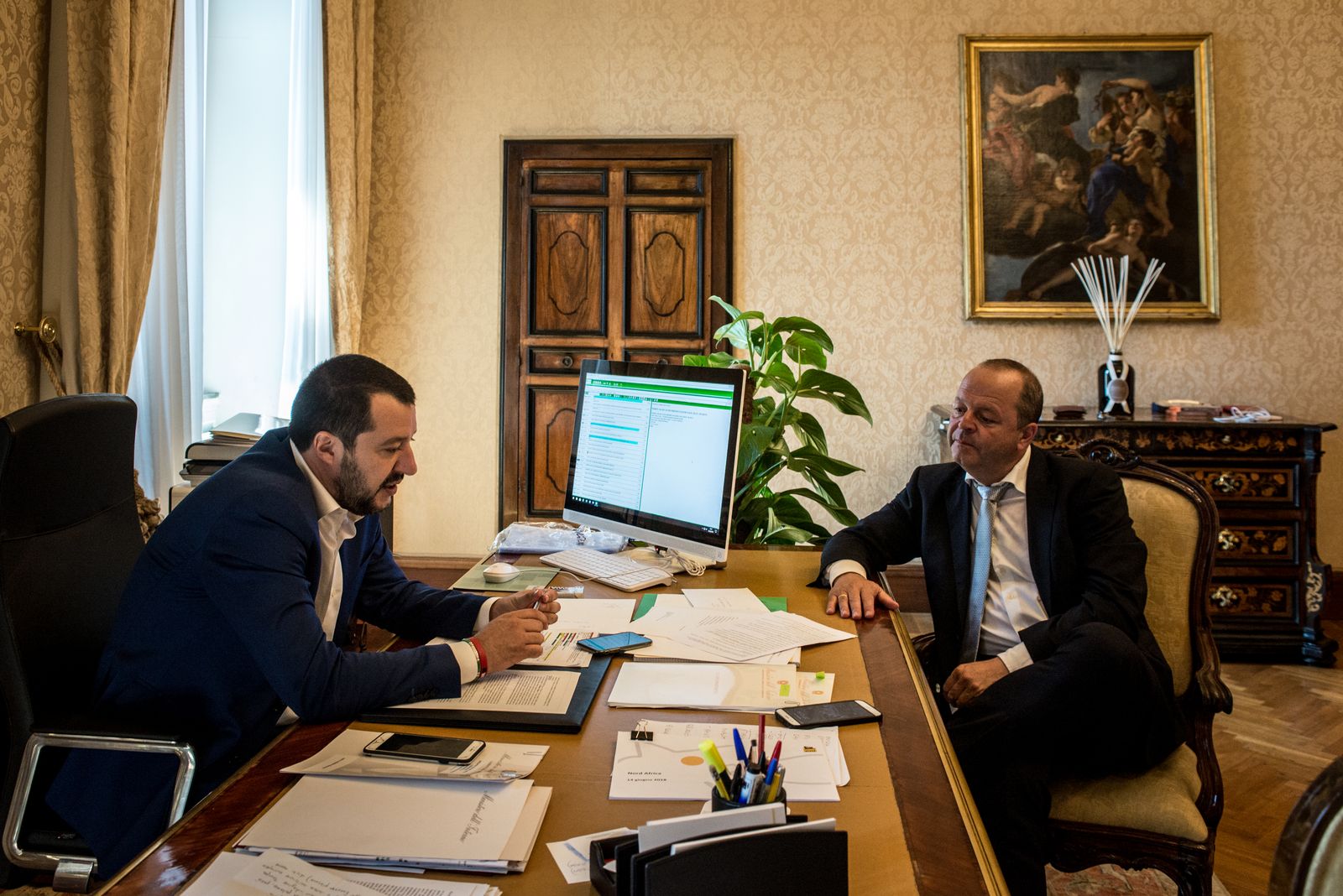