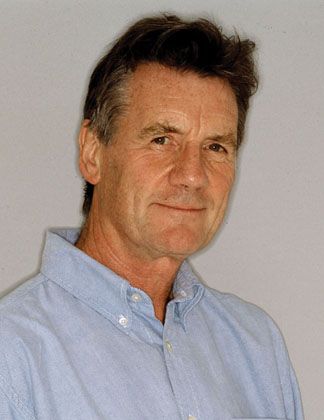 Michael Palin: "There is no demand for blandness these days."

Michael Palin: Absolutely! Originally my landlord intended to sharply increase the rent for my office near Covent Garden. Now I guess he's quite happy that I'm the tenant and not some investment banker.

SPIEGEL: When Monty Python started the Flying Circus in the late 1960s and early 1970s, the British economy was also in a very sorry state.

SPIEGEL: Maybe the crisis back then paved the path for Monty Python's anarchic kind of humor. And today ...

Palin: ... history repeats itself. There is no demand for blandness these days. Generally speaking, comedy thrives in times of despair.

SPIEGEL: Back then, the whole country suffered power cuts and blackouts -- some episodes of "Monty Python's Flying Circus" couldn't even be broadcast.

Palin: That's why it is called "black comedy". Seriously, at the very beginning, Monty Python was largely inspired by another crisis: The end of the British empire. When I was a child, Britain had just gone through WWII, but it still ruled half the world. In the space of a few years, it all changed completely. The Army, the church, all the political institutions and their stuffy attitudes lost a lot of their power. Python was part of the disrespectful bunch which helped to mock the establishment.

SPIEGEL: These days bankers and big bosses should be the natural targets for satire. But those attacks aren't really happening.

Palin: Yes, we are in terrible mess, morally and economically. But there isn't any anger. The British in general are not very good at dividing the world into villains and saints. Everybody has the feeling that he shares at least some responsibility for the crisis. We are aware that somebody messed around with us, but we were very grateful for that as long as our real estate prices were rising.

SPIEGEL: Do you think the British are better prepared to deal with crises because of their world-famous humor?

Palin: Laughter means catharsis. I think that it's very important to be able to laugh at yourself -- whether as an individual or as a society. The British may be more suited to that compared to other people.

Palin: We are not very good at reverence. As far as I know nobody has ever been threatened in this country because he made fun of somebody. We are free to mock ourselves -- and our government. In Russia, on the other hand, people were sent to the gulag when they dared to laugh about Stalin. And in Germany, one had to be very careful about making jokes about Hitler for 12 years. I think you never forget that as a country. In England the worst thing that can happen to you is that you are banned from a club, or that nobility is denied.

SPIEGEL: So is Great Britain still a splendid place for a comedian?

Palin: No, I'm afraid we are about to lose our casual attitude, unfortunately.

Palin: Islamic terrorism. I don't know many people who make jokes about al-Qaida these days. People are scared.

SPIEGEL: Monty Python might have written a few jokes about them.

Palin: Yes, if Python would get together we might come up with some ideas for a show. Like having a Taliban as a candidate on"Who wants to be a Millionaire?" or an al-Qaida tour, "Caves of the World."

SPIEGEL: Why don't you do it?

Palin: Well, we might end up with a debate like the Danes who triggered a world-wide affair with the Muhammad caricatures. Political correctness is intimidating people. And I'm not just talking about terrorism. Sometimes you get the impression that you're not allowed to make jokes unless you've read the small print. But that's not possible. Humor has to be spontaneous. Laughter is a kind of a libertarian thing. I hope it remains that way.

SPIEGEL: For your latest book, "New Europe," you travelled to Eastern Germany. While you were there, did you discover anything you might call a "German sense of humor"?

Palin: That's a bit of a leading question, isn't it? I guess there are some minor differences in British and German humor. An academic I met in Berlin told me that German humor is top-down. British humor works the other way around: You laugh at people at the top of society.

SPIEGEL: You also took a lesson at a tank-driving school in the eastern German state of Brandenburg. Is Germany a particularly easy target for an English comedian?

Palin: I never intended to make fun of Germany. Driving a tank is not that funny for a rookie -- it's hard work. I stalled the engine twice. But after I learned how to drive it, it was a wonderful experience. Honestly, I don't have that many opportunities to drive a tank in my everyday life.

SPIEGEL: Are you always recognized as an Englishman when you travel abroad?

Palin: Well, nobody has ever thought that I was from Finland or confused me with his old school buddy from Erfurt (in eastern Germany).

SPIEGEL: What is it that makes you English in the first place?

Palin: We do have an obsession with apologies. I say "sorry" all the time. England may be the only country in the world where you say "sorry" if someone steps on your foot on the train. Sorry my foot is in your way!

SPIEGEL: Where does it come from? Is it a special kind of irony? Or self-loathing?

Palin: How to put this without sounding rather pretentious? I think it's manners. We live on a densely populated island. You have to be as tolerant as possible and you also have to emphasize your privacy. I'm afraid that's the only way for me to put it. Sorry.