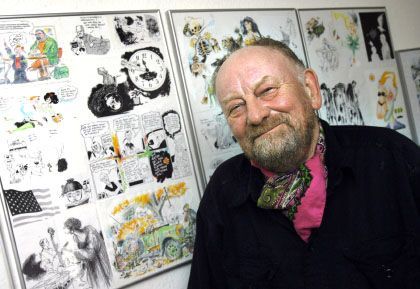 Danish cartoonist Kurt Westergaard, 72, drew a cartoon for Jyllands-Posten depicting the Prophet Muhammad with a bomb for a turban. Since the end of 2007, he has been living underground as a result of death threats made against him.

SPIEGEL ONLINE: Mr. Westergaard, the anti-Koran movie made by right-wing Dutch politician Geert Wilders begins with your drawing of the Prophet Muhammad showing him with a time bomb in his turban. You are taking legal action against Wilders as a result. Why?

Westergaard: The Danish Association of Journalists will file for an injunction today to force Wilders to take my cartoon out of the film. I don't want my cartoon taken out of its original context. It was a cartoon aiming at fanatic Islamist terrorists -- a small part of Islam. The cartoon must not be used against Muslim society as a whole. That was not my intention.

SPIEGEL ONLINE: And this is what you think Wilders is doing with his film?

Westergaard: Wilders has a overly generalized perception of Muslims as potential terrorists. But it's not like that at all -- I know a lot of Muslims living here in Denmark who accept democracy completely and who live their religion as a very private matter. I hope that all Muslims will adapt to secular society. There is currently friction between Muslim and Christian culture. But I am quite sure that our Western democratic culture will prevail over the darker version of Islam. We must have Islam-light.

SPIEGEL ONLINE: You also sued a Danish group that used your cartoon as part of their warning against the Islamization of Europe. Why?

Westergaard: For the same reasons I am going after Wilders. I know I can not prevent the use of the cartoon everywhere. It has become something of an icon in this debate. But I will do so where I can.

SPIEGEL ONLINE: Just like Wilders, you are living under permanent threat from radical Muslims and are under constant police protection. Are you afraid that the situation might get even worse now that Wilders has used your drawing?

Westergaard: I haven't talked to my agent from the Danish secret service agency PET yet today, which I do almost daily. But I am briefed about the security situation.

SPIEGEL ONLINE: In February, after a number of men were temporarily taken into custody for allegedly plotting to kill you, your wife lost her job. Her employer didn't feel her safety could be guaranteed anymore. Have you experienced a lack of understanding for your situation?

Westergaard: I can't really complain. My wife got her job back.

SPIEGEL ONLINE: Wilders is only able to see his wife every two weeks. For you, Christmas was the only time you could meet your family. Isn't the constant hiding a huge strain on your family?

Westergaard: It is indeed very depressing. Yesterday we moved for the seventh time since November. I don't know how long it will be until we can return home. But I have not lost my courage. I got very angry when I was threatened and I still have this anger.

SPIEGEL ONLINE: Geert Wilders praised the Danish Government and the Danish population for their courage. He said that, in contrast to the Dutch government, the Danes have not caved in to the Muslims. How do you feel about this praise from a right-wing politician?

Westergaard: I have always been in favor of Wilders having the freedom to make and show his film. In Denmark, no politician would say: Don't show this film. They would not dare to say such a thing. This is a difference from the Netherlands -- although I don't want to interfere in Dutch politics. I can only speak for my own country.

SPIEGEL ONLINE: Do you sometimes regret having drawn the cartoon?

Westergaard: No. If it hadn't been the cartoon, it would have been a book or a play or a film that would have provoked the protests. I think we have to get through this period of friction between the two cultures. I hope that our Muslim fellow citizens will understand what it means to live in a democracy. Even if you are against the democracy, you can still live there, but you must fight with peaceful means. In Denmark we have a saying: Democracy goes to bed with its enemies -- not out of desire but out of principle.