SPIEGEL ONLINE: This Sunday marks the first anniversary of the airplane crash at Smolensk. On April 10, 2010, Polish President Lech Kaczynski and 95 other politicians, church leaders and military officials perished. Is Poland still in a state of shock?

Tusk: We are in mourning because we lost several dozen leading public figures. It's not only the immediate families who are mourning, it is an authentic, national state of mourning.

SPIEGEL ONLINE: As prime minister, how did you deal with the tragedy?

Tusk: For me as the prime minister it was of utmost importance to provide for the continuity of the government. It was important to prevent a crisis of state: The president, the head of the Bank of Poland, the leaders of both chambers of parliament and many other officials were killed. This event has proved the resilience of the Polish state. The country maintained its domestic order and its foreign policy continuity.

SPIEGEL ONLINE: The historically tense relationship between Warsaw and Moscow initially appeared to have been improved by the tragedy. But serious differences of opinion relating to the accident emerged later. A Russian investigative commission placed the blame for the crash solely on the Polish pilots. How do relations stand today?

Tusk: Right after the accident, which happened on Russian territory, the most important thing was to prevent the deterioration of Polish-Russian relations. On that issue, not everyone in Poland or Russia has been helpful. Despite the fact that the Russian authorities have not always taken an appropriate stance during the investigation into the causes of the accident, one can still say that the process of reconciliation that we began four years ago has continued to move forward.

SPIEGEL ONLINE: The tragedy has long since been used to make political capital. Opposition leader Jaroslaw Kaczynski, the twin brother of the deceased president, has even said he considers you to be partially responsible for the accident. Will the tragedy play a decisive role in elections in the autumn?

Tusk: The opposition has used it as a tool to attack the government. But I believe the same thing would happen in any other country. Public opinion here is divided on this issue, but the majority of the Polish public takes a rational approach on this issue.

SPIEGEL ONLINE: The euro is in a state of crisis. Is it worth it for Poland to board this sinking ship?

Tusk: This nautical analogy is graphic, but the euro is not a sinking ship. I met with the prime minister of Malta (this week) and he is convinced that his country would have experienced a major financial catastrophe without the euro. The Slovaks and Estonians share similar views. I can confirm that Poland will join the euro zone, and not just because all the treaties are signed, but because I consider it of strategic interest both for Poland and the European Union. But only a fool would believe that the euro could provide a guarantee that a financial crisis would never happen again. No currency can protect against that. Still, strict criteria apply within the euro zone for financial and budgetary policies which make it possible to combat the crisis. Today Poland meets many of the Maastricht criteria better than some euro-zone countries.

SPIEGEL ONLINE: What is the public perception of the euro in Poland? Has the crisis stirred fears in the Polish populace or has it instead fostered trust? After all, the European Union ultimately rescued the countries that were worst-hit.

Tusk: There has never been particular enthusiasm for the euro in Poland -- neither now nor before the crisis. Opinion has always been divided 50-50 and not much has changed. It could be characterized as a kind of rational skepticism. We want the euro, but we are in no hurry. We want to first see how the euro zone overcomes its problems.

SPIEGEL ONLINE: And when does Poland want to join the euro zone?

Tusk: I already made the mistake once of publicly naming a date, 2012. But one month later, Lehman Brothers collapsed. I haven't named any dates since then. Unless something extraordinary happens, we will meet the criteria by 2015, which is not to say that that is the probable date for accession.

'Europe Must Believe in the Point of Integration'

SPIEGEL ONLINE: Do Poles fear a two-speed Europe, one in which the euro zone diverges from the rest of the EU? It has been said that you had a serious dispute with German Chancellor Angela Merkel over the issue.

Tusk: I am a rather calm person generally and I'm plain incapable of getting angry with Angela Merkel. The truth is that I was convinced then, and I am convinced today, that an attempt to divide Europe into two clubs where, for example, the euro-zone countries would form one separate club, is definitely wrong. For Poland, given our historical experience, it is very important that Europe has faith in its own strength and believes in the point of integration. When I hear the tone of some in the European debates, I get the impression that the idea of the union needs to be explained again and again. The European Union wasn't only designed for good times. We believe it was also designed to withstand the bad times. It is the principle of solidarity that has made it so interesting. The new member states understand that better than the old ones.

Tusk: Let us leave the EU budget alone. One can't seriously suggest that the budget in Brussels caused the financial crisis. Let us recollect the true reason for the current crisis. Where are the villians of the economic crisis, the institutions that are responsible? Where do they reside? In Bucharest or Vilnius? Or in New York or London? It is actually quite easy to prove that EU spending is the best remedy against the crisis in the majority of countries.

SPIEGEL ONLINE: Because of the revolution sweeping through the Arab countries, the EU is likely to take a much closer look at the Mediterranean region. Under these conditions, is it likely Poland will be able to push through its vision of Europe's eastward expansion?

Tusk: Of course there is no doubt that the events in the Arab world are the most important challenges right now. Politics is not just about planning for the future. It is also about the challenge of intelligently and quickly reacting to what life brings us. It has far more to do with the art of governing sensibly than futurology. Our presidency, therefore, will also focus on the Mediterranean area. Malta, Italy and other EU Mediterranean countries already have a major problem with immigration. We have to help them. But we cannot allow the events in North Africa to block the enlargement of the EU. Can someone explain to me why Croatia should have to pay for Gadhafi's tyranny? The developments in the Arab world have also shown that today it is more important than ever to conduct negotiations with Turkey.

SPIEGEL ONLINE: Why did Poland, like Germany, not participate in the air strikes against Libya?

Tusk: Poland supported the United Nations resolution. It is participating in all the humanitarian activities as a member state of NATO and the EU. In military terms: Our engagement in Afghanistan has already pushed us to the limits of our capabilities. We have 3,000 men there and it is a large contingent. Not all of the arguments for military intervention in Libya are 100 percent convincing to us. Do Sudan and Ivory Coast not also face drama that is comparable to what is happening in Libya? My dream would be for the EU to always respond according to the same set of standards. Is Europe really prepared to defend the human rights of citizens in all those countries where rights are violated? When the armed forces are used in the face of an ideal, such as human rights, no one should assume we would be relieved of our responsibility should another case arise elsewhere in the future. We should avoid this ambiguity at all costs. We cannot create the impression that Europe only reacts where it is easy or comfortable or where there is oil. Otherwise we could lose our self-respect.

SPIEGEL ONLINE: But Poland actually wants to take on a more important role in Europe. Do you not see it as weakening your status when, in a situation like this, you take a position against France and Italy?

Tusk: Poland today is a respected partner in the EU, whether or not we send troops elsewhere. If Poland is convinced (of the need to intervene), then you can count on us -- just look at Afghanistan.

SPIEGEL ONLINE: France and Germany, the traditional motor of the EU, opposed each other on the Libya question. Is the deployment in Libya dividing the EU?

Tusk: No, it just goes to show that there are no permanent alliances. States create new groupings based on each issue -- and that is correct. For historical reasons, the Germans are hesitant to engage themselves militarily, and that is understandable.

SPIEGEL ONLINE: Poland is economically successful and a respected partner in the world. It has a stable government and a moderate political landscape. Is Poland gradually becoming boring, in a positive sense?

Tusk: I prefer boring liberalism to right-wing totalitarianism or excited socialism. Perhaps it is because some people consider me to be a boring guy in politics. I prefer pragmatism to great visionary designs. I believe that is how most normal people think. 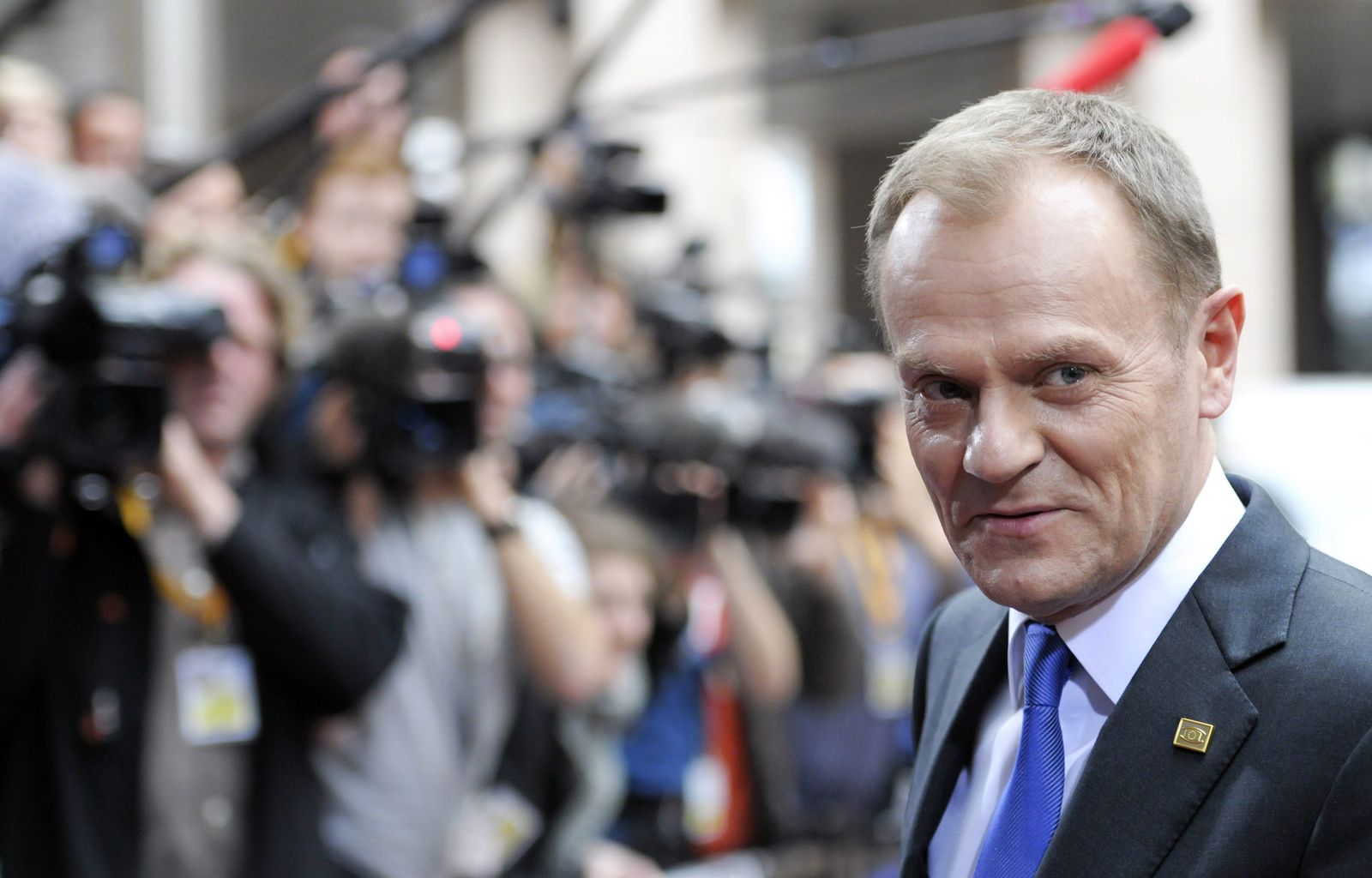