As president of Serbia, Aleksandar Vucic, 49, advocates rapprochement between his country and the European Union, but at the same time, he is flirting with Moscow and Beijing. Considered a nationalist hardliner in the era of Slobodan Milosevic, who appointed him information minister, Vucic ignores his many critics and charts his own course. A lawyer by training, Vucic sees it as his role to provide a stronger voice for the Western Balkans, which have been neglected by the EU.

DER SPIEGEL: Mr. President, your next visit to Russian President Vladimir Putin in Moscow was planned for Dec. 4. Are you thinking of cancelling the visit after yesterday's revelations about the degree to which Russian intelligence agents were spying on the Serbian military?

Vucic: No, we're not considering it. We want to further deepen our excellent and friendly relations. But of course, Serbia wants to show that it is an independent country that knows how to protect its military neutrality. We are taking a serious and responsible approach to the current situation.

DER SPIEGEL: How do you intend to restore trust with your traditional ally?

Vucic: Our nations have been friends since time immemorial. Serbia is prepared for good relations and hope that Russia is as well. What just happened, of course, isn't easy for us. But what alternative did we have aside from taking it public? We have to protect our country.

DER SPIEGEL: Serbia's recent foreign policy moves make it seem as though you are testing out a kind of tightrope act, with your country oscillating between the West and the East.

Vucic: Serbia continues to be on the path toward EU membership. That's our strategic goal. At the same time, however, we have good relations with China and Russia. We have to keep an eye on survival and on Serbia's interests, after all.

DER SPIEGEL: Was it necessary, despite massive warnings from Brussels, to sign a treaty with the Eurasian Economic Union, which unites autocratically governed countries like Belarus and Kazakhstan under Russian leadership?

Vucic: We have not become members of this union. We have only signed economic and trade agreements so that we can sell cheese, yogurt, cigarettes and cognac to Russia. As soon as we join the EU, that is, if we join at all, these agreements will become meaningless.

DER SPIEGEL: Russia can nonetheless sell this deal as a strategic victory. What did Putin promise you in return?

Vucic: He knows that these are temporary agreements. I, on the other hand, have to think of Serbia. In contrast to Romania, for example, which has received 60 billion euros from the EU to date, we have no access to EU structural funds. Nevertheless, Serbia has one of the highest economic growth rates in Europe and is running a budget surplus for the fourth consecutive year. We attract more than half of all foreign direct investment in the Western Balkans.

DER SPIEGEL: Your economic rapprochement with Russia will be billed in Moscow as Serbia distancing itself from Europe. Doesn't that worry you?

Vucic: We have clear and fair relations with Russia. They know what I represent. That's not the case with many EU politicians, particularly the populists. They forget where they come from just as soon as they arrive in Moscow. When I'm in Moscow, I make it clear: We are friends, but Serbia still wants to be part of the EU.

DER SPIEGEL: What interest, then, would Moscow have in drawing Serbia into its economic realm? What interest would it have in supplying Serbia with modern weapons, which recently prompted Matthew Palmer, the U.S. special representative for the Western Balkans, to threaten your country with sanctions?

Vucic: The Russians have their interests and we have ours. The Russians don't make us any gifts, but they have given us a good price.

DER SPIEGEL: A large Russian military shipment was intercepted by Romania in July, but it nonetheless made it to Serbia by air at a later date. For what is Serbia arming itself?

Vucic: For nothing. But we are deeply grateful to the Russians, and the recent spying scandal doesn't change that. Remember, we were the only country that didn't impose sanctions on Russia.

DER SPIEGEL: When Russian Prime Minister Dmitry Medvedev was in Belgrade in October, you laid a wreath with him at the "Death to Fascism - Freedom to the Peoples" memorial at a time when Russian soldiers are occupying parts of Georgia and Ukraine. Isn't that just a fabricated anti-fascist tale?

Vucic: There can never be too much anti-fascism. Serbs and Russians suffered considerably under the Nazis during World War II, in part due, thanks to the Nazis, to an allegedly independent Croatian state that killed hundreds of thousands of Serbians at the time. We actually need more remembrance of those who died merely because they didn't come from countries that the Croats or other Nazi satellite states liked.

DER SPIEGEL: When you meet with Putin or Medvedev, do you also talk about the occupation of Crimea and parts of eastern Ukraine?

Vucic: Of course not. I come from a very small country and take care of our own vested interests. You Germans can talk about that with him. When I am with Angela (Merkel), we talk about how you should be buying our apples and pears.

Vucic: Of course, we also talk about the so-called "Peace Highway." That's the project for which I have been accused by some compatriots of being Serbia's greatest traitor: A 77-kilometer stretch of highway to Pristina in Kosovo. For me, it's about bridgebuilding, not about helping out with the establishment of Greater Albania, as some have accused me of doing. Merkel provided support in the form of a 20-percent loan. I ask her how she might be able to help us. I don't care about the world stage. I care about Serbia and the Balkans. Period.

DER SPIEGEL: Yet China appears to be playing an increasingly large role for your country. You speak of a "friendship as hard as steel." Was that because the Chinese purchased the steel mill in Smederevo?

Vucic: Yes, among other things. It is a stable friendship that I am proud of. When the Americans pulled out of the steel mill, there was talk of bankruptcy and 5,000 people were threatened with unemployment. I begged Xi Jinping to "come and save us." He came and he delivered what he had promised. On the other hand, we didn't get the new Volkswagen factory, despite the fact that we invested a lot and had all our hopes set on it. They decided in favor of Turkey.

DER SPIEGEL: Do you feel neglected by the EU?

Vucic: It is their decision. One thing is clear, though: I no longer want to be lectured about our China contacts by EU politicians who have been to China three times as often as I have. The Chinese bought the high-tech company Kuka in Germany, which is worth 10 times more than anything they have acquired in Serbia.

DER SPIEGEL: Whose hypocrisy are you complaining about specifically?

Vucic: I am thinking of almost every leading politician in the EU and in the West. I am not the only one who is present at the annual China-Middle and Eastern Europe summit. EU member states like Poland and Greece are also there. But everyone picks on Serbia, which is typical of the double standards we encounter over and over again.

DER SPIEGEL: Do you think more patience is shown to your neighboring country of Croatia, an EU member state?

Vucic: Do you think Serbia would be given nearly 400 million euros in EU funds so that this money could be used for a bridge to be built with the help of Chinese workers, as is taking place currently on the Adriatic Sea in Croatia? I would probably be hanged in Brussels.

DER SPIEGEL: The original plan was for Serbia to join the EU in 2025, but that's no longer on the table. Who's responsible? French President Emmanuel Macron, who also recently blocked accession negotiations with Albania and North Macedonia?

Vucic: It would be too easy to complain about Macron. The real question is this: What does the future look like for us here in the Balkans? Are you counting on us, or do you just want to buy time? Be fair to us and stop talking about performance-related admission criteria if, in the end, as the German philosopher Leibniz said, "sufficient reasons" can always be found to reject a country. What we are demanding is clarity and foresight -- nothing else.

DER SPIEGEL: Is the Serbian population losing their patience?

Vucic: Surveys show that 42 percent of Serbs favor EU membership and 42 percent are against it. The rest are undecided. Those who do not want to extend a hand to Albania and North Macedonia must also expect increasing rejection in Serbia.

DER SPIEGEL: That would send a disastrous message, especially given that you have been acting for some time as a kind of spokesman for the Western Balkans.

Vucic: I was with the prime ministers of Albania and North Macedonia at the Ohrid summit and we agreed on almost every point, including that I would talk to Macron on behalf of everyone, as I did last week.

DER SPIEGEL: Apparently without much success. Is that why you're planning your own "mini-Schengen" in the Balkans?

Vucic: We in the Balkans no longer want to be belittled or played off against each other by large EU countries. My idea of a mini-Schengen zone in the Balkans -- i.e., the free movement of goods and people -- is a contribution to that. We're strengthening our economic cooperation. We're putting an end to a situation in which our trucks are forced to stand at each border for 90 hours. The World Bank estimates it will lead to 3.5 billion euros in savings in the region.

DER SPIEGEL: Can this step help to heal the wounds created by the war in Yugoslavia?

Vucic: The "mini-Schengen" project is one of the best things that has happened in this region in 30 years. No more war, no more slaughter, instead a kind of Scandinavia for the poor. We could become a growth engine for all of Europe.

DER SPIEGEL: Is Kosovo, which still belongs to Serbia under international law, to be part of the mini-Schengen project?

Vucic: The Kosovars don't know what they want. Albin Kurti, who is likely to be their next leader, sounds as if he wants to become the leader of Greater Albania. Kosovo views itself as a state, but we do not see it that way. We could still do great business together though.

DER SPIEGEL: Kurti has announced he plans to adopt a tougher stance on Serbia. Have you met him yet?

Vucic: He once insulted my underage daughter and told her to find an Albanian to marry. I told him: "Get some better manners, you idiot." What I'm wondering is this: Why did the West open a Pandora's box in 2008 by recognizing Kosovo?

DER SPIEGEL: Not long ago, you said it was "highly unlikely" that Serbia would recognize Kosovo within the existing borders. That sounds, as is quite often the case with you, rather vague.

Vucic: It's correct that my position isn't defined very tightly. If it were crystal clear, we would slam the door on all further negotiations, just as the Kosovars do all the time. I want to keep open the possibility of compromise. And for that, I am disparaged by compatriots like former foreign minister Vuk Jeremic as the greatest traitor of all time.

DER SPIEGEL: You once stood together with Peter Handke at the grave of the war criminal Slobodan Milosevic. Now, you have announced that you wanted to celebrate Handke and his Nobel Prize for literature in Belgrade. What point are you trying to make?

Vucic: Handke is a fantastic guy, he defended himself together with us in a very difficult phase for this country. We are grateful to him from the bottom of our hearts. He has done a lot for Serbia. 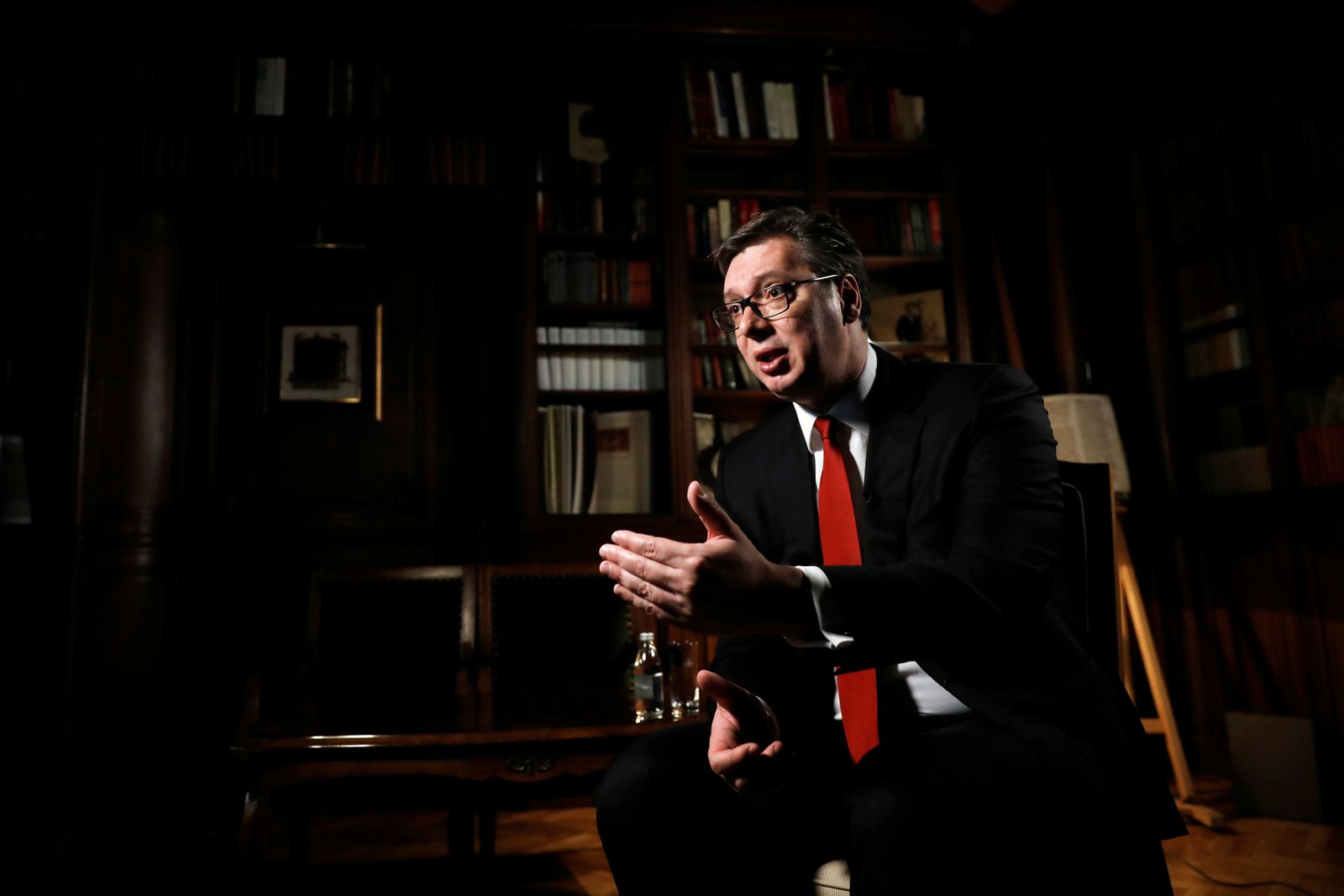