Only around 50 Jews survived the Sobibór Nazi death camp in eastern Poland. At most, seven are still alive today. The majority of survivors suffer from health problems today, but Philip Bialowitz, 84, who emigrated to the United States after the war, still travels the world to "tell people my story," the native Pole says. SPIEGEL ONLINE recently interviewed the Holocaust survivor in Warsaw at the Museum of the History of Polish Jews.

SPIEGEL ONLINE: Mr. Bialowitz, how did you feel when you learned that the site of the gas chambers at Sobibór had been discovered?

Bialowitz: I was pleased! It was the best moment of my life. You know, Sobibór was a top secret death camp in the middle of the forest; it was hidden from the consciousness of the outside world. After its closure, the Germans tried to do everything they could to hide their crime. But now archeologists have discovered the gas chambers. Sobibór will become better known, and it will serve as an educational center for future generations. This is a victory -- not only for us as survivors, but also for the whole mankind.

Bialowitz: My older brother Simcha saved me. When we arrived at the camp, an SS man called out asking if there was anyone with a profession. My brother immediately stepped forward and said he was a pharmacist and that I was his assistant. My seven-year-old niece hugged me one more time and then Simcha and I were separated from the group. The others were killed. 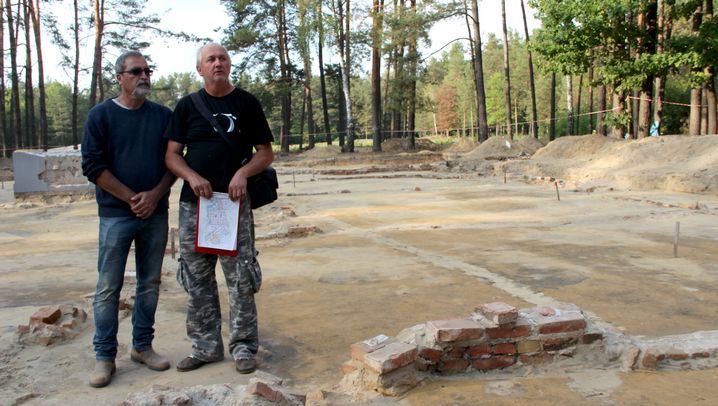 Photo Gallery: The Excavation of Sobibór

SPIEGEL ONLINE: You were used as a so-called "working Jew". That meant doing things like shaving off the hair of the doomed before they were sent to the gas chambers. What did you see there?

Bialowitz: One time, when a large train from the Netherlands arrived in Sobibór, an SS officer gave them a welcome speech. He apologized to the Dutch for the inconvenience in travel and said they would now be relocated. He told them to write a postcard for their loved ones back home to assure them everyone was OK. Some clapped their hands and shouted: "Bravo". After the postcards were completed, the Germans told them: Now you have to take a shower and be disinfected. A guard collected watches and jewelry and gave them fake receipts for their later pick-up. Then the unwitting people were sent down the Himmelsfahrtstrasse, the "Road to Heaven"…

SPIEGEL ONLINE: … which led directly to the gas chambers. As a slave laborer, did you suspect that they also planned to kill you sooner or later?

Bialowitz: We all knew that. You could smell the smoke (from the crematoriums). But we defended ourselves. My brother and I were in the group of conspiracy, 40 people who prepared the revolt at Sobibór in 1943. Russian prisoners of war showed us how to fight. We had no idea. One of our leaders said that if one of us survived, he must tell the world about this place and what was happening here. I promised that to him. When everything started (on Oct. 14, 1943), I was the messenger. I went to the SS people and told them that we had boots and leather coats for them to try on. They came and we killed 11 of them with axes and knives. Our next step was to cut the electricity supply and the phone lines. I then climbed over the barbed wire and started running -- straight in the direction of Germans' living areas.

SPIEGEL ONLINE: Why that?

Bialowitz: Because I imagined they wouldn't have laid any mines there. And that proved to be right. I escaped.

SPIEGEL ONLINE: What happened then?

Bialowitz: We ran into a group of Polish partisans. But when they found out we were Jews, they were not so nice anymore. I escaped again. In the end, a Polish farmer called Mazurek hid my brother and me in his farm until the Red Army came.

SPIEGEL ONLINE: At the time, you were a teenager. Today you are well over 80 and yet you still travel around the world.

Bialowitz: I am doing this because I swore that I would continue to go around and tell my story about the Sobibor death camp to young people for as long as I was still able to. We cannot allow what happened back then to be forgotten.

SPIEGEL ONLINE: The remaining witnesses will pass away in the coming years. What will happen then?

Bialowitz: I hope God gives me a few more years. But one day no one will be left to tell their stories, and this is why this discovery in Sobibór is so important. In the future, young people will be able to see with their very own eyes what happened back then in Sobibór. Education is the key to a better world. A new museum is supposed to be built at Sobibór, but they need a lot of money there. Germany should help to build this museum and support it. German carries responsibility for this place.

Read an Article About the Excavations at Sobibór
A Voice for the Dead: Recovering the Lost History of Sobibór Von Claus Hecking