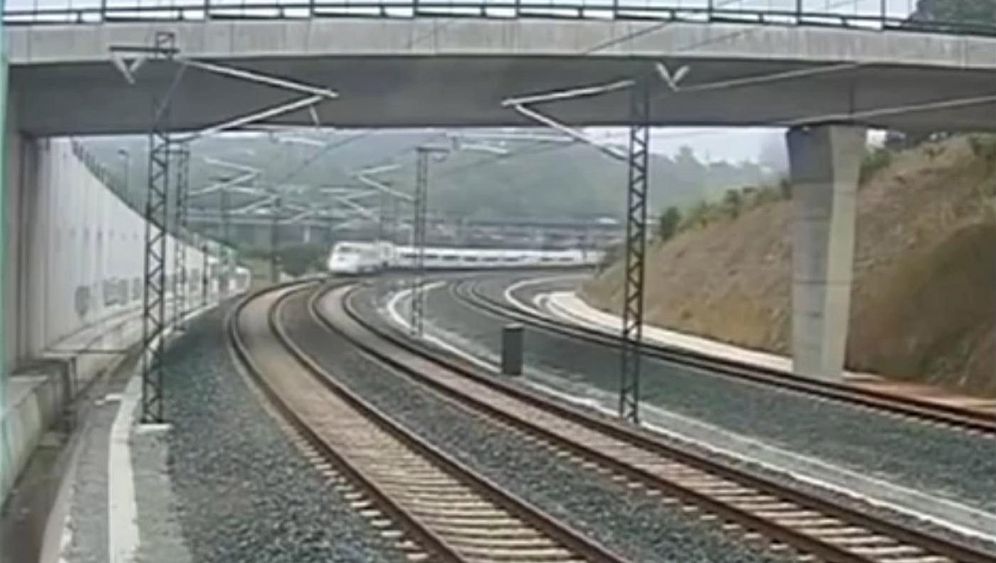 "July 24 will no longer be the eve of a day of celebration," said Alberto Nunez Feijoo, regional president of Spain's Galicia. Rather, it will commemorate "one of the saddest days" in the region's history.

Feijoo on Thursday ordered a seven-day period of mourning in the region following the previous night's disastrous train crash not far from the northwestern Spanish city of Santiago de Compostela. The accident killed 80 people and injured many more, with over 90 reportedly still in the hospital. Dozens of the injured remained in critical condition on Thursday. The train was reportedly carrying 218 passengers and five crew members, though the numbers reported have varied. 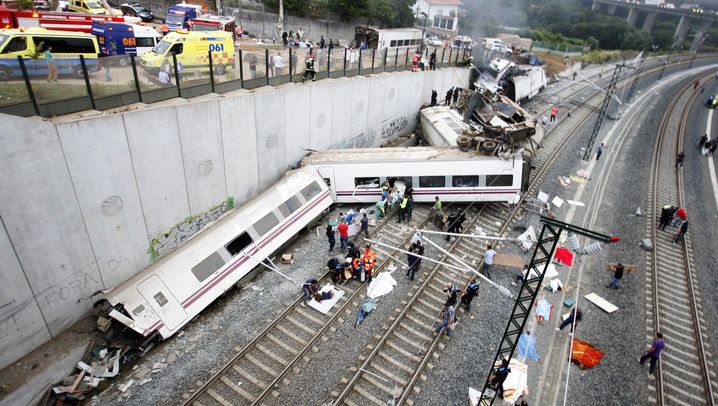 The crash is the worst rail disaster seen in Spain in decades, and there are mounting indications that excessive speed may have been the decisive factor in the derailment. Spanish daily El País on Thursday posted a video to its website from a security camera located at the site of the accident. The footage shows the train rapidly coming around a sharp bend before the first and second cars appear to jump the tracks. The engine is dragged onto its side and the rest of the eight-car train piles up behind it. The video ends with the train apparently crashing into the camera.

One of the drivers, too, confirmed that he had been travelling too fast. Immediately after the crash, he radioed the railway station, saying he had entered the sharp bend at 190 kilometers per hour (120 mph), more than double the maximum allowed of 80 kmh, according to national broadcaster TVE.

"I've derailed! What am I going to do? What am I going to do?" he shouted, according to TVE. He also repeatedly said, "We're only human! We're only human!" He then added: "I hope there are no deaths because they would weigh heavily on my conscience." On Thursday, police opened an investigation into one of the drivers on suspicion that he may bear some responsibility for the disaster.

The scene on Wednesday night was catastrophic -- Feijoo called it "Dante-esque" on Thursday. The force of the crash buckled many of the cars, and one carriage was flung onto a raised road abutting the rail line. The tracks were littered with wreckage from the train and passengers' belongings, along with the bodies of the dead, many of them covered with blankets as rescue efforts wore on.

On Thursday morning, workers continued to clean up, using cranes to lift the destroyed cars off of the tracks. Meanwhile, efforts are underway to identify the dead, with El País reporting that the relatives of some of the victims had been informed. Several foreign nationals were reportedly on board the train, including travellers from the US and Britain, though it is not yet known if any of them are among the dead. A spokeswoman for Germany's Foreign Ministry in Berlin told news agency AFP that they were trying to determine if any Germans had been on the train at the time of the derailment. El País reported that a list of the victims might be available as early as 10 p.m. on Thursday.

Spanish Prime Minister Mariano Rajoy hurried to Santiago de Compostela -- where he is from -- on Thursday morning to tour the crash site and declared a three-day period of mourning for the country. Several world leaders likewise sent messages of condolence, including German Chancellor Angela Merkel and President Joachim Gauck. Pope Francis likewise expressed his sympathies from Brazil where he is visiting World Youth Day. Rajoy said on Thursday that it was "the saddest day of the Apostle" he had ever experienced, a reference to the holiday celebrated in northwestern Spain.

Even as increased attention has turned to the speed at which the train was travelling, several questions remain. Spanish rail operator Renfe has said that the train, an Alvia 730 series travelling from Madrid to El Ferrol, had no technical problems, which has led to speculation that track safety systems may have failed. High-speed rail links in Europe are generally equipped with a system, called the European Train Control System, designed to automatically control a train's speed.

According to media reports on Thursday, however, the section of track where the derailment took place was not outfitted with ETCS, and instead relied on a less sophisticated system known as ASFA. Even still, ASFA sends warnings to drivers who are going too fast. It is possible that the warning system failed or that the drivers became confused as they crossed from one safety system to the other.

But according to Reuters, that seems unlikely as well. The driver knew the stretch of track well and had been operating trains in the area for three years.