It didn't take long for French President Nicolas Sarkozy to begin looking for investors in the newly designed euro backstop fund. Just hours after euro-zone leaders announced that they had agreed on a plan to boost the impact of the European Financial Stability Fund (EFSF) to €1 trillion ($1.4 trillion) on Thursday morning, Sarkozy telephoned with Chinese President Hu Jintao to discuss his country's involvement.

While nothing concrete resulted from the chat, there are indications on Friday that any Chinese involvement could come at a price. According to a front-page story in the Financial Times, China would not only require water-tight guarantees on its investment, but Europe might have to pay a political price as well.

As a condition for its involvement, Beijing could ask European leaders to cease criticizing China's policy of keeping its currency, the renminbi, artificially undervalued, Li Daokui, a member of China's central bank monetary policy committee, told the paper. It is an issue that has repeatedly strained China's relations with Europe, but especially with the United States. Were Europe to agree to such a demand, it could drive a wedge between Washington and Brussels.

"It is in China's long-term and intrinsic interest to help Europe because they are our biggest trading partner," Li told the Financial Times. "But ... the last thing China wants to do is throw away the country's wealth and be seen as just a source of dumb money."

Although plans to boost the EFSF are far from complete, a pair of measures is being explored. The first involves offering investors in euro-zone sovereign bonds first-loss insurance, whereby the EFSF would pick up the first 20 percent, for example, of any losses on bond investments. The second envisions the creation of a fund to attract outside investment.

The International Monetary Fund has indicated that it could participate in such a fund. But China too -- which trades heavily with Europe and is thus eager to see it resolve its ongoing debt crisis -- is seen as a natural investor. Indeed, Beijing has expressed a willingness to help out in the past. And with $3.2 trillion in hard currency reserves -- a quarter of which is thought to be held in euros -- the country would be well positioned to invest in an EFSF fund.

Klaus Regling, who heads the fund, traveled to China on Thursday and will continue discussions with Chinese leaders on Friday over how much Beijing might be willing to invest. But he warned that no conclusive deal is likely to be reached immediately.

"We all know China has a particular need to invest surpluses," he said at a press conference on Friday. "I think the EFSF can offer a good product that is commercially interesting.

In addition to boosting the EFSF, European leaders on Thursday morning announced that Greek debt was to be slashed by 50 percent and that European banks would be required to increase their core capital ratios to 9 percent. The euro zone hopes that the moves, in combination, will be enough to limit the worst of the damage to Greece and prevent contagion from spreading to larger euro-zone economies, such as Italy, Spain or even France. 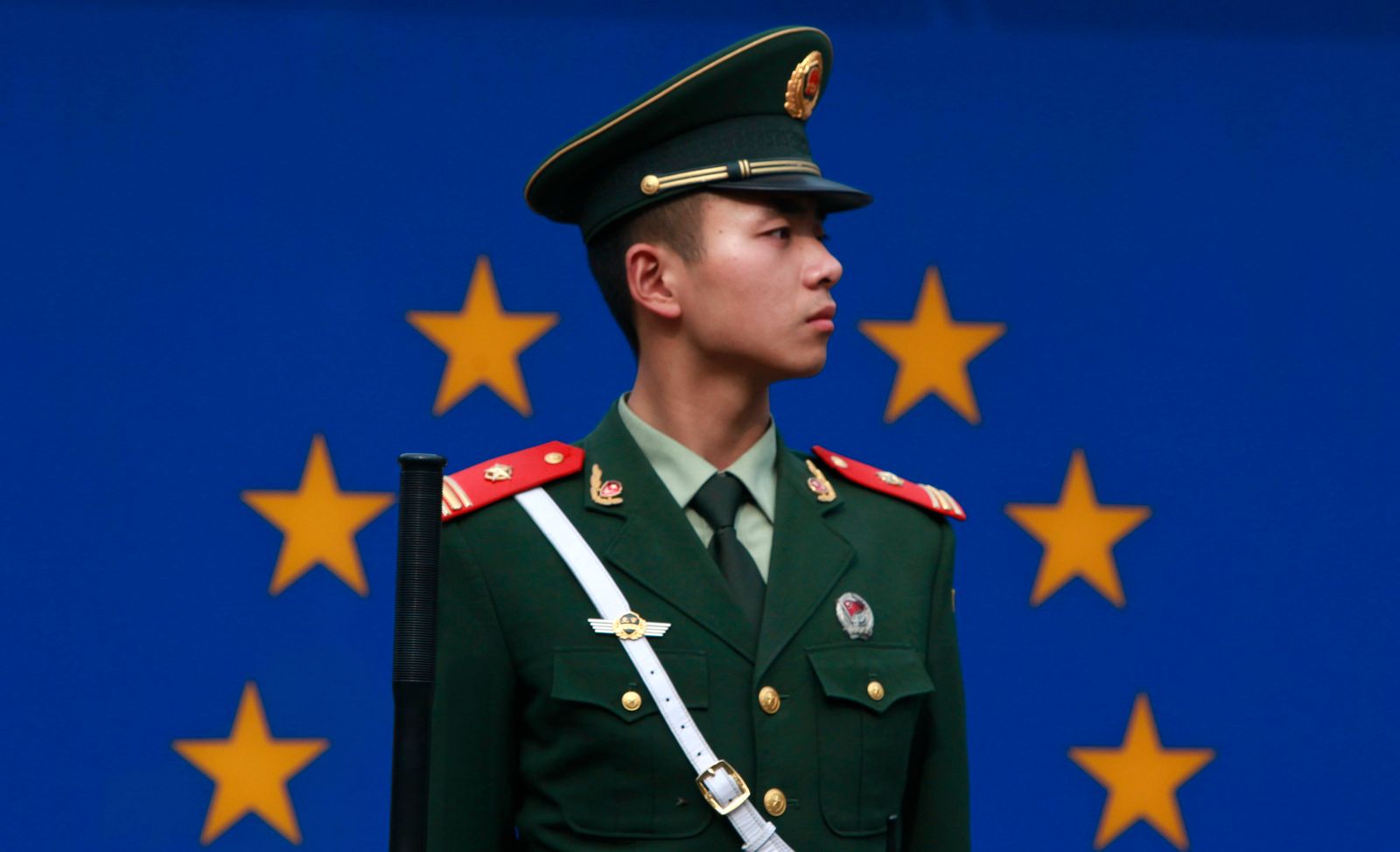 A Chinese policeman in front of the European Union flag in Beijing: Chinese investment in Europe could come at a price.