Pat Cox, 56, served as the president of the European Parliament from 2002-2004 and is currently the head of the European Movement, a network of pro-European organizations. He was the 2004 recipient of the Charlemagne Prize, one of Europe's most prestigious awards, for his efforts in European integration.

In the run-up to the European elections, what issues are being debated in Ireland ? Are these issues national or European in nature?

The state of the economy is completely suffusing the campaign -- the precipitant nature of the collapse in growth, including the consequences the drop in tax revenues is having on fiscal policies -- and anxiety about unemployment. It is highly probable the electorate will sanction the current government and its leading party, Fianna Fáil, during the European and municipal elections in June.

A key issue in European politics is market ideology. Is there a debate in Ireland about whether the market ideology of Brussels needs amendments or instead needs to be strengthened or defended?

This discourse is not absent. But if one were to step back and ask how people want to deal with this space between the market economy and the social market economy or interventionism versus less regulation, it wouldn't capture much public attention. This issue will not be a motor force that drives people to vote in particular directions.

Another key issue in many countries is euroskepticsm. Would you say that, in Ireland , support for the EU has changed? Is there a populist protest against Brussels ? 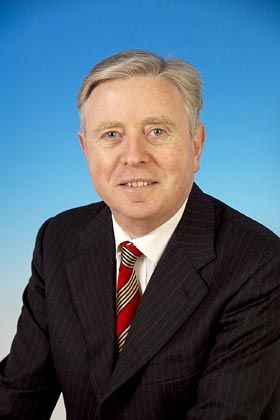 Irish public opinion about being in the EU remains remarkably high -- it's amongst the highest of all 27 members. Then you have the paradox: Why did the same people reject the Lisbon Treaty? Most people hold the rational conviction that the EU is good for small nations -- you have certainties, you can jointly promote interests and defend values. At another level, though, there is little emotional connection with Europe -- there's a sense that the love was closer to the dowry than the bride.

We have the Libertas party now, but a share of Ireland's seats has always been occupied by persons who fit the bill for euroskepticism. I don't expect that number to change much. Libertas (the group that campaigned against the Lisbon Treaty and has now recast itself as a "pan-European" party running 300 candidates in 24 member states) has its best chance in Ireland, where founder and leader Declan Ganley could win a seat -- but I would be very surprised if his other candidates won. He's talked of winning 100 seats across Europe, but that sounds delusional.

How would voters in Ireland like the EU to develop? Does the Lisbon Treaty stand a better chance of passage if a second referendum is held? Would the Irish support a joint foreign policy? A more powerful European Central Bank? And what are the limits for unification?

Opinion polls have shown a clear trend towards a greater number indicating they would vote "yes." The Irish have been profoundly shocked by the speed and depth of the economic crisis. We are likely to see a negative growth rate of 9 percent this year. Lithuania might be worse off, but in the Olympic competition for worst performance we will take home a medal. We've gone from a balanced budget at the end of 2007 to a deficit this year that will be more than 10 percentage points of GDP. We have an unemployment rate that has virtually doubled and continues to rise. It's not surprising that a cold shower of economic reality has descended upon Irish public opinion and I think there is a general feeling that the tsunami of bad economic news could do with at least one safe harbor.

The Irish government has sought legal guarantees on the Lisbon Treaty -- on key issues such as tax, neutrality and defense, and ethical issues such as abortion -- to be approved at the upcoming EU summit in June before announcing the date of a second referendum. It is always difficult to prejudge these issues, but I think these guarantees from Brussels after Lisbon's rejection are important. They will enable the government in Dublin to tell voters they were listened to -- their concerns were addressed to the extent possible -- and that they have good reasons to be invited to reflect and vote again.

There are still concerns among voters here about Ireland's neutrality that must be addressed, even if they are unfounded, because people are afraid of conscription into a European military force. In truth, though, EU foreign policy has been a lot more modest than the polemics surrounding it. It has mostly been a helping hand, done under UN Security Council mandates and has been more civilian in nature than military. It has been a highly decent, values-based set of interventions by Europe entirely consistent with Irish foreign policy values and interests.

On the issue of EU expansion, in the immediate years after enlargement when the Irish economy and construction sector were still booming, the contribution of non-nationals -- particularly Central and Eastern Europeans -- was indispensable, a win-win for both immigrants and Irish. Some have gone back home, though, and there is some debate hinting at deeper anxieties that will sharpen if the crisis continues.

Mostly, though, the Irish are quite positive about economic Europe, social Europe and foreign policy Europe developments in ways the behavior surrounding the Lisbon vote would appear to deny.