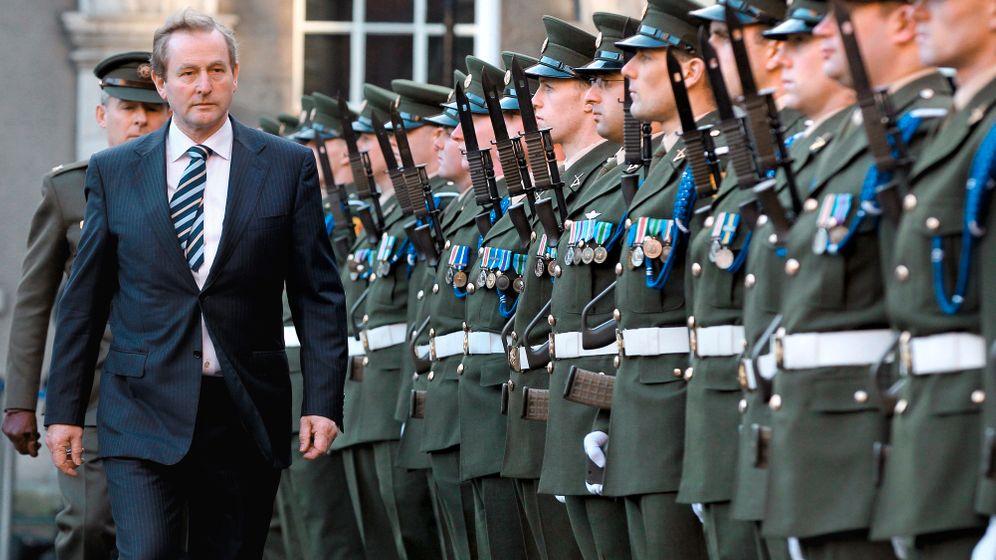 In his home country, Irish Prime Minister Enda Kenny, 61, has a reputation for being somewhat wooden. But when he meets with German Chancellor Angela Merkel and other top German politicians, he's capable of unaccustomed gallantry, as the Irish have noted with surprise. For instance, Kenny has recently proved that he's a master of the diplomatic art known as "air kissing."

This Tuesday, the Irishman will have yet another opportunity to demonstrate his skills. Kenny is traveling to the southern German village of Wildbad Kreuth, where the conservative Christian Social Union (CSU) -- the Bavarian sister party to Merkel's Christian Democratic Union (CDU) -- is holding its annual gathering. At it, Kenny hopes to schmooze with Horst Seehofer, the CSU's chairman, and Gerda Hasselfeldt, head of its federal parliamentary group. Shortly after breakfast, and before a speech by the chairman of the Bavarian Farmers' Association, Kenny plans to present his country as a model of successful reform policies.

Kenny's charm offensive is not entirely altruistic. For over two years -- and to the delight of the Anglo-Saxon media -- the conservative leader has been trying to get European taxpayers to foot the enormous bill for bailing out Ireland's ailing banking sector. But, taking their cue from the Germans, the Europeans have so far balked at the idea.

Instead, Chancellor Merkel has been quick to praise the way Ireland has implemented economic reforms and used money from European bailout funds over the past few years to emerge from the crisis: Exports have risen, the country has regained its competitiveness, and it has even succeeded in getting private creditors to lend it some money.

Unfortunately, this gleaming façade obscures a rather dismal reality. Although Ireland's economy has stabilized, its debts continue to mount -- despite the fact that the country has been diligently fulfilling all of the demands made by the troika of lenders, which consists of the European Commission, the International Monetary Fund (IMF) and the European Central Bank (ECB). This year, Ireland's public debt is expected to increase to 122 percent of its annual gross domestic product (GDP) -- in other words, beyond the limit at which the IMF believes long-term debt sustainability can be achieved.

The €68 billion ($90 billion) in bailout funds are only expected to meet the country's financial needs until the end of 2013. But Ireland has a trick up its sleeve that it hopes will allow it to avoid a second official aid package: Kenny would like to transfer one-quarter of Ireland's public debt -- the amount that was amassed solely from bailing out the country's banks -- to the EU. "By June, following the decision of the European Council, we expect agreement on the modalities of reducing the burden that the Irish taxpayer took on from the recapitalization of the going-concern banks," Kenny reportedly said shortly before Christmas.

On Jan. 1, Ireland assumed the presidency of the European Council, which rotates every six months. During this period, Kenny is expected to forge important compromises among the EU's 27 member states. But, more importantly, he intends to use his position to highlight Irish concerns.

Ireland's demands are very precise -- and could be costly for the Germans. At stake are the €31 billion that the country received from the system of European central banks to save two crisis-ridden Irish financial institutions in 2010. The country is expected to pay this money back in installments over the next 10 years.

Already last year, the Irish pushed long and hard until they were allowed to pay back the first installment with the help of a new loan. But that was not a long-term solution. Starting this year, the state will explicitly be liable for the debts of Ireland's nationalized banks. This has prompted the Irish to look for a more creative solution this year. "We would like the payback period for the debts to be extended and the interest rates to be cut to a reasonable level," European Affairs Minister Lucinda Creighton told SPIEGEL.

This notion has met with resistance from the ECB, however. ECB President Mario Draghi regularly snubbed Kenny when he broached the topic at the numerous Brussels summits last year. The ECB wants to avoid any more accusations of directly financing ailing euro-zone member states. For Draghi, the simplest solution would be for the European Stability Mechanism (ESM), the euro zone's €700 billion permanent backstop fund, to step into the breach and take over the debt.

Kenny would ideally like to use the ESM as a way of getting European taxpayers to shoulder the risks associated with all the debts of the Irish banking sector. He intends to use the six months of his European presidency to push through a banking union that would also make the bailout fund responsible for dealing with toxic assets in the European banking system left over from the financial crisis of 2007-2008.

But to achieve this, Kenny will need the support of Chancellor Merkel and Germany's parliament, the Bundestag. If he manages to push through his agenda, Europe's taxpayers will have to absorb a significant portion of the risks of Ireland's banking sector. If the Germans refuse, it will become more likely that Ireland will have to be bailed out a second time this autumn.

It looks as if Kenny's newfound talent still has to be put to the test.